Putinflation’ has rewritten the economic rulebook 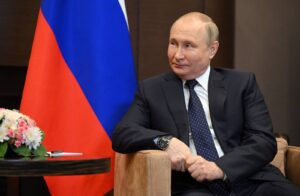 Recent falls in stock markets are just what we needed. In fact, the falls in all financial markets – bonds, stocks and of course, the plaything de jour, crypto – may just save the world from an economic catastrophe. This may sound counterintuitive. Aren’t financial markets supposed to be economic indicators; when they go up, the future is rosy and when they go down, it’s time to get out of town? Sometimes this is true but not in 2022. Before we dive into the argument that falls in assets prices could be good for the global – and by extension the Irish – economy, let’s examine the market falls.

Both stock and bond markets are weakening at the same time. This should not happen. Typically, stocks and bonds go in opposite directions. Stocks are linked to higher growth and go up if we expect growth to rise. Bonds, linked to lower growth and inflation, should go up when the economy is expected to contract. In the past few weeks, almost unprecedentedly, both stocks and bonds have sold off. This is because the moneymen expect global stagflation – a world where the economy slows and yet inflation rises. Such an unusual outcome is the result of “Putinflation” – inflation associated with Russian president Vladimir Putin in the guise of higher energy prices, a real income squeeze in Europe as wages fail to keep up with the cost of living; as well as China, which amounts to nearly 20 per cent of global GDP, going into a Covid-inspired slump.

Across the board, financial markets are down but the carnage has been worse in tech stocks, the darlings of the past 10 years. While the general US stock market is down 20 per cent this year, companies such as Amazon and Facebook/Meta are down 37 per cent and 43 per cent respectively, revealing a complete reversal of previous performance. Netflix’s valuation is evaporating quicker than Johnny Depp’s reputation with the streaming giant down 70 per cent while the crypto exchange, Coinbase, is down 75 per cent. On the whole, Nasdaq, the tech index, has lost close to 30 per cent since the start of the year. Although all economies thrive on innovation and tech companies are the disrupters at the front end of innovation, they still have to make money. Recent evidence shows they are not making the easy money of the past half-decade or so.

Recent falls might not be so bad for the whole economy because tech and crypto stocks and valuations were driven by cheap money. When money is cheap, the cost of gambling with borrowed money to bet on a bright new future is low. In an environment of zero interest rates, the cost of failure is negligible, prompting people to “have a go”. As long as demand is greater than supply, the price of these shares will go up. Rising prices morph into something more interesting: soaring prices act as a siren, a seductress who flirts with gamblers, coaxing them in with the promise of further effortless gain. Who can refuse such temptation?

As the price rises, demand does not fall – as classical economics suggests. In fact, it rises – excitedly. The investing herd moves towards giddy jubilation as rising prices allure the uninitiated. People who never traded stocks in their lives are sucked into the casino. These “day traders” provide the necessary retail element at the bottom of the pyramid. Each new hopeful at the bottom pushes the price a bit higher, allowing the professionals at the top to sell out early. Meanwhile froth builds. As stocks rise, owners feel richer and spend money they haven’t yet cashed in, on the back of expected gains. This inflates the economy further, putting central bankers on the alert.

Now that the markets are deflating on their own, central bankers will be delighted. That is what they want. As the wonderful economist Dario Perkins pointed out on my podcast, one of the problems in the United States is the fact that lots of these day-trading “millionaires” did not return to work after the pandemic, preferring to watch their inflated stock portfolios rise. Why go out to work when all you had to do was look at your trading screen for a few hours a day and get rich? These folk, who now have to pay back their borrowings, will be presenting themselves as available for work, easing wage inflation in the US labour market.

The deflating financial markets are likely to reduce the chance of a global policy mistake that would see global central banks panicking and raising interest rates too quickly. Central bankers are keen to become all macho, channelling their inner Paul Volcker, former US Federal Reserve chair, and raise interest rates. But when US inflation is due to energy price hikes and too few workers looking for jobs, raising interest rates will only increase the cost of living. In Europe, where almost all the inflation is “Putinflation”, raising rates now would have no immediate impact whatsoever on rising consumer prices, but would risk recession. Is this what anyone wants as Europe tries to cope with the Ukrainian refugee crisis?

The best thing for everyone now would be to sit on their hands and allow the financial bubble that was inflated by cheap money to deflate of its own accord. Financial markets long ago stopped being an essential source of finance for cash-starved innovative companies that can’t get money anywhere else. These days, many quoted markets are nothing more than a scorecard for the 1 per cent, and a get-rich-quick avenue for the associated players in the financial business itself. As a proxy for the real world, and in terms of the impact of financial markets movements in people’s day-to-day economic reality, real lives, the casino tells us very little. Every time you see the financial markets falling, don’t stress about it. We should welcome it. The more these markets fall back to earth, the less chance of the world grinding to a halt.

When this is over, we should carry out a full investigation of the hospitality trade and in particular the restrictive licensing laws around venues, bars and the so-called “night-time” economy. At a time like this, it may be unusual to argue for more rather than less...

END_OF_DOCUMENT_TOKEN_TO_BE_REPLACED

My builder told me about ‘the inflationary climate’. It must be true

When it comes to economics, jargon is often deployed to obscure. The straight-talking Harry Truman cut through the waffle when he observed, “It’s a recession when your neighbour loses his job; it’s a depression when you lose yours”. This week, we could have done with...

END_OF_DOCUMENT_TOKEN_TO_BE_REPLACED

If Finland can eliminate homelessness, so can we

When describing social and behavioural change, probably the finest, and certainly most thoughtful, Irish economist of his generation, Eric Lonergan, speaks of a concept called “extreme positive incentives for change”, or Epic for short. The nub of the idea is if we...

END_OF_DOCUMENT_TOKEN_TO_BE_REPLACED

Irish soccer is the winner as Premier League loses its way

Tomorrow, between 30,000 and 35,000 fans are expected to be at the FAI Cup final in Dublin’s Aviva Stadium. Even without Shamrock Rovers, the league champions, it should be quite the afternoon of soccer in the city, in a league where the standard of the game is...

END_OF_DOCUMENT_TOKEN_TO_BE_REPLACED

Stop hiding behind faux arguments when objecting to new homes

END_OF_DOCUMENT_TOKEN_TO_BE_REPLACED

The road from Beirut to the Roman ruins at Baalbek takes you on the main highway to Damascus, the same route the occupying Syrian army rumbled along, east to west, throughout their 20-year occupation during Lebanon’s civil war. With a certain cruel symmetry, it is the...

END_OF_DOCUMENT_TOKEN_TO_BE_REPLACED

Fossil fuels are the slave trade of the 21st century, and these companies defiling the planet will be ostracised over the next 30 years. We will make this change, without doubt. Supporting the burning of fossil fuels will soon become a mark of shame and derision....

END_OF_DOCUMENT_TOKEN_TO_BE_REPLACED

Further down the coast, in what they called the eastern settlement, more evidence points to a civilisation that became extinct. Archaeologists found a huge amount of wooden objects, nails, cups, hinges, axes and other valuable materials that would usually be taken by...