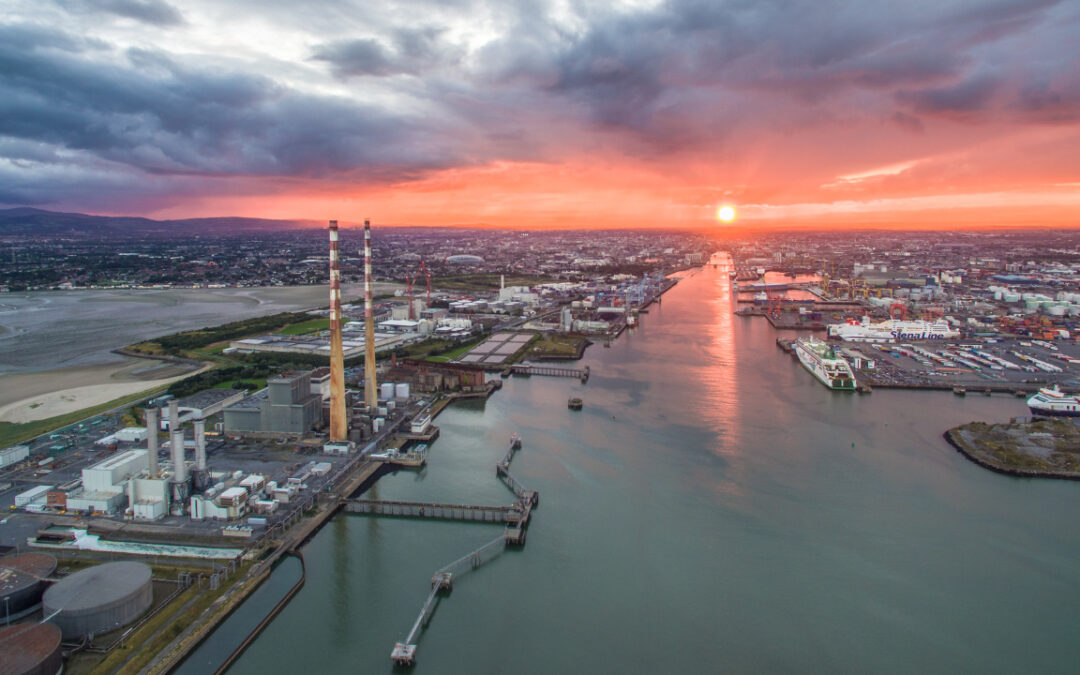 In the past couple of days, a row has broken out between Minister for Transport and Green leader Eamon Ryan and Eamonn O’Reilly, the public servant who runs Dublin Port. It’s a turf war in essence.

Ryan, as Minister and a TD for some of the area covered by the port, leads the party committed to higher density and more environmentally sustainable living, and he wants to set aside vacant but highly valuable land on the Poolbeg peninsula for housing. O’Reilly, meanwhile, wants to expand the port’s capacity without moving.

Before we delve into this argument, let’s just remind ourselves who owns these lands: you do. The State is the shareholder of Dublin Port, which means that we, the people, own the land and therefore what is best for the people should be the major consideration.

This latest spat refocuses attention on what is the best long-term use of the extraordinarily valuable land mass that is Dublin Port. This discussion is not going away for a number of major reasons.

The first is that Ireland has and will continue to have a housing crisis. If we developed into a new city the 260 hectares (close to 650 acres) of prime urban land that is now home to the port, we would dramatically ease our housing dilemma.

One of the main drivers of house price inflation is supply and one of the major causes of supply problems is capacity and the availability of appropriate land. Appropriate land is land that is close to existing infrastructure and where it is attractive to live. A new, ambitious Dublin Port City is an obvious long-term solution.

By way of comparison, Oslo has moved its port and built an entirely new town in its place, called Fjord City, which has completely transformed the city. A few years ago I strolled around this beautiful mix of residential units, retail, parks, schools, kindergartens and walkways. For the sea swimmer in you, the Guardian rates Oslo’s redeveloped docklands in Europe’s top 10 such swimming spots. It turns out that when a city decides to embrace, not turn its back on, its greatest asset – the sea – people like it.

Obviously, the biggest impediment between Dublin city and the sea is that the city is cut off from the sea by the port. It took Oslo 20 years to complete the new Fjord City, and it is still developing, but 20 years and more is the timeframe needed to achieve urban transformation.

From a national planning perspective, moving Dublin Port and liberating this waterside land to create what the Norwegians have done is an obvious option. It’s hardly surprising that cities across the world – Barcelona, Bremen, Copenhagen, Amsterdam, Oslo, Bilbao, Buenos Aires and Genoa, to name a few – have redeveloped and/or relocated their traditional ports.

Another reason is long-term national planning. State assets such as the location of the ports must sit within some long-term framework. Demography is destiny. The Irish population is rising rapidly. In the coming decades we will be back to the pre-Famine populations of 8 million on the island. These people must live somewhere.

Sprawling, low-density, car-dependent suburbs stretching for miles on radial rings outside the capital, or indeed outside other cities, is not a runner. We need higher density living in order to hit climate change targets, ease congestion and wean ourselves off carbon-based transport. Therefore, urban land already in the city is at a massive premium.

Moving Irish ports – not just Dublin Port – to alternative sites to create new, high density mini-cities is something worth considering, and it’s a progressive sign that the Minister is thinking this way. There are plans, advanced in the case of Cork, incipient in the case of Galway, to redevelop old port areas into liveable new communities. Dublin dwarfs these two ports, implying that the opportunity is enormous and the opportunity cost of doing nothing is equally staggering.

There is nothing wrong with Dublin Port. It is simply in the wrong place. Ports don’t have to be at the mouths of rivers any longer because goods are not shipped over land on rivers or canals. The location of the port is the historical legacy of an age that has passed.

The port management appears to do an excellent job. According to the management, in 2019 a total of 1.95 million tourists, 559,540 tourist vehicles and 98,897 trade vehicles used Dublin Port. The port also hosted 158 cruise liner visits, comprising a total of 323,234 people in terms of passengers and crew.

Meanwhile, the port handled some 38.1 million tonnes of trade; this is impressive and puts Dublin on a par with Bilbao (35 million tonnes) and twice as large as the Nordic ports of Copenhagen and Helsinki. However, it pales in comparison with the gargantuan Rotterdam (469 million) and is significantly smaller than both Genoa (68 million) and Barcelona (66 million).

In the years ahead, and with one eye on potential constitutional and economic change in the North, the Dublin to Belfast corridor will likely become the economic engine of a potentially new Ireland. It will be home to the two major cities in the island, as well as the two most densely populated regions, with close to half the island’s population squeezed into less than 20 per cent of its land mass.

Infrastructure planned now needs to bear this in mind. A new east-coast super port located farther up the east coast away from Dublin towards the North seems logical. The option of Bremore as an alternative to Dublin and Belfast ports, again liberating waterfront land for development in both cities, has been regularly mooted.

As we talk about the infrastructural future of the island, in response to any suggestions that Dublin Port should be moved the Dublin Port Company has taken the distinctly Paisleyite approach of “never, never, never”. Its latest report (and it commissions many) conveniently puts together a history of the many proposals regarding the development of the port over the past century here; while these are fascinating to read, every proposal to move the port is met with a no, no, no. The port company isn’t for moving.

Proposals to consider affordable housing, urban development, national spatial strategy and climate change are dismissed as “grandiose”. But national plans should be grandiose. They should be ambitious yet achievable. When the Georgian Ascendancy decided to build up Dublin to rival London in the 18th century, their plans were “grandiose”. Grandiose is how you get the Phoenix Park, Merrion Square, O’Connell Street, College Green, Trinity College and Stephen’s Green.

Right now we have a row between a Minister and a public servant, both paid by you, the taxpayer, over a State asset, Dublin Port, that you in fact own. The discussion is of national importance. Both sides have a case to put and should be heard. Ultimately, though, the question whether to move the port and build a new mini-city by the sea is all about legacy thinking versus short-term thinking.