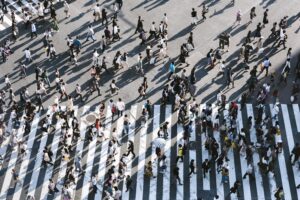 When teenagers are growing, there’s little point buying them runners or clothes that fit snugly as they will have outgrown them all too soon and you’ll get little value from the purchase. There might by a monumental teenage row, but it’s the right thing to do. Keep this image in your head and consider planning for a growing economy with a growing population. The same principle, obvious to any parent, applies.

The island of Ireland, yes the one which could be united one way or another by 2050, will have a population heading towards 10 million. The economic, social and infrastructural conversations over the next few years must be framed within the notion of “Planning for 10 million”. It works as a slogan. It is easy to grasp and, in the transition to a united island, it has more transcendent and imaginative breadth than a simple and divisive sectarian headcount. In fact, even if the electorates rejected the idea, we’d still have to plan for 10 million.

Based on Central Statistics Office (CSO) projections, the population of the Republic is expected to increase by up to 41 per cent over the coming 30 years – swelling to 6.7 million by 2051 under a high fertility, high migration scenario. Under the most conservative scenario, the population is still expected to grow to about 5.7 million, representing a significant 17 per cent increase. In contrast, the North is much less dynamic – the Northern Ireland Statistics and Research Agency (NISRA) estimates the population of the North is set to rise by just over 2 per cent to 1.94 million by 2045. Taken together, the population of the island could be as high as 8.6 million, surpassing famine levels. With these types of internal dynamics, the island’s population is on its way to 10 million. Like the parent shopping for the teenager, we should plan for more not less growth.

Migrants will be a key driving force of the new population, projected to rise to 19.7 per cent by 2051 according to the Irish Fiscal Advisory Council – that means roughly one in five people. In the North, lower immigration will take the foreign-born share of the population up from about 7 per cent today to about 9.3 per cent by 2045. This implies that by 2050, about 1.87 million (17.8 per cent) of the all-island population will be foreign-born. Ethnically, if we include the second- and third-generation immigrants – the Irish-born children of immigrants in the country today and in recent decades – this figure obviously rises. We will see a multi-ethnic island in the decades ahead, an island where concepts of “Irishness” will be more fluid than we are used to.

To put this in the rather blunt context of the island’s identity politics, there are already more immigrants on the island than there are unionists. In a few decades, there’ll be twice as many. We can’t presume to know their view on a united Ireland.

What percentage of these 8.5 million will be working? Today, about 65 per cent of the Republic’s population are in work and this is likely to fall to about 56-59 per cent by 2050, and about the same in the North. With the North in the same constitutional entity, population centres will be a bit more balanced. In 2022, Dublin’s population of 1.45 million accounts for just under 30 per cent of the Republic’s total, with Cork City next on the list accounting for just 222,333 or 4 per cent. The introduction of Belfast’s 639,000 residents and the rest of the North’s population into these calculations, would even things out slightly. In the new Ireland, Dublin’s share of the total population would be down to 20 per cent, with Belfast’s 6 per cent offering something of a counterweight. The East/North axis between Dublin and Belfast will be by far the most economically dominant part of the new country.

With about 8.5 million people, this new united island would compare in population terms with the Austria or Switzerland of today, and it might be useful to follow the model of these successful countries. In the health sphere, the Organisation for Economic Co-operation and Development (OECD) data from 208 countries suggests that less than 5 per cent of the Irish population have unmet health needs due to financial, geographic or wait-time reasons, as opposed to 17 per cent in the UK. According to The Lancet, Ireland’s health system ranked 11th globally while the UK ranked 23rd. Meanwhile, Austria – whose 8.9 million population bears a striking similarity to the population of a future united Ireland size-wise – ranked 13th. If we can match Austria’s current health system metrics, we will be in decent shape. It is clear from international evidence that the NHS is not anywhere close to the standard we require. This idea that we should “cut and paste” the NHS has no place in discussions. The Austrian model implies more than doubling our bed capacity and significantly increasing the number of doctors per capita.

Although we might not appreciate it, Ireland is currently the best educated country in the EU. About 50 per cent of Irish people have completed tertiary education, and this is despite the fact we invest the least in education among OECD countries – only 3.1 per cent of GDP was invested in education in 2019. In the new united island, the school-going population would be in the range of 1-1.3 million by the middle of the century. If we are to improve the existing student-to-teacher ratio from 22:1 to the EU average for primary and secondary schools, 13:1, we would need to see the stock of teachers across the island to be pushed to about 100,000.

On housing, Austria sets the standard with 550 units per thousand as opposed to 400 or so in the Republic and 431 in the North. In order to make up this gap and drive a united Ireland’s housing stock per 1,000 residents to Austrian levels (which isn’t unreasonable if you expect our average household size to converge to European norms), we need to construct some 1.9 million homes. This is a near doubling of the total existing housing stock in the Republic (2.1 million). Last year, only four new homes were built per 1,000 inhabitants in Dublin. We’d better get our skates on. Sinn Féin should know the road to a united Ireland goes directly through a building site and Breakfast Roll Man will deliver it.