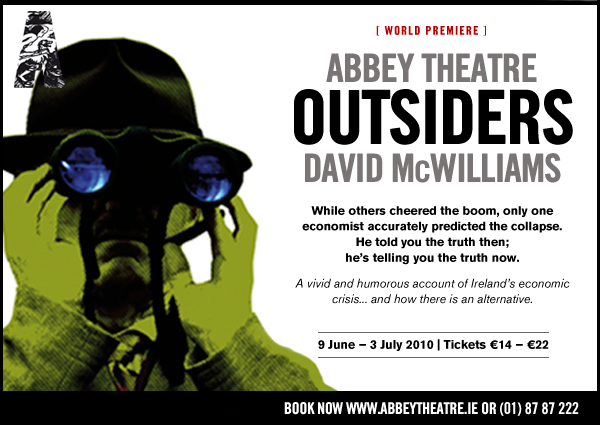 March 2010 — The Abbey Theatre is delighted to present the world premiere of OUTSIDERS by leading economist and commentator David McWilliams on the Peacock stage, opening on Wednesday 16 June (previews from 9 June). David McWilliams takes to the stage in an event which is part stand up, part discussion, part social observation and is directed by award-winning director Conall Morrison.

OUTSIDERS is a characteristically vivid, humorous and uncompromising account of what is going on in Ireland. In a unique theatre piece, McWilliams offers a narrative of the recent collusion between the insiders of the Irish political system and the financial sector.

McWilliams believes Ireland’s political and social divide is not so much about rich and poor, young and old, urban and rural, but about Insiders and Outsiders. The Insiders — found in every village, town and city — are those with a stake in our country who believe that today’s status quo must be preserved at all costs. The Outsiders — who might live next door — are those who realise that the status quo is part of the problem.

In Ireland every time there is a crisis, the Insiders get stronger, not weaker. Far from losing power and paying for the chaos they caused, they tighten their grip on the country. In contrast, the Outsiders are excluded and left to fend for themselves. That is what happened in the 1950s and the 1980s and it is happening again now. But there is an alternative. OUTSIDERS is about the alternative.

While the others cheered the boom, only one economist accurately predicted the collapse and mess we find ourselves in. He told you the truth then; he’s telling you the truth now.

David McWilliams to take to the stage in "Outsiders"

[…] discussion, part social observation and is directed by award-winning director Conall Morrison. Abbey Theatre Presents World Premiere of ?Outsiders? by David McWilliams | David McWilliams __________________ To view links or images in signatures your post count must be 10 or greater. […]

Sounds like a great event, production. We need something like this in the USA, where crooked banks and their un-arrested, and hugely rewarded, CEOs will never go to jail. … I have often thought of Ireland as being like a large American high school, with its little core of “popular”: kids and everyone else an outsider. … But given human nature, everyone needs to save and be prudent in order not to be entirely at the mercy of the insiders. As the Afro-American song says, “God bless the child who has his own.”

When will a print copy be available?

For the insiders their incomes and assets will be squeezed in the coming years. We the outsiders can’t afford to carry them any more. They are the public service workers , the bank employees etc. Our borrowings this year will be 11.6% of GDP by 2014 this will have to be reduced to 3%. The EU comission have imposed this on us and we must obey. For public service workers it will mean a reduction in their numbers and more pay cuts. For the bankers it will mean job cuts , I can’t see their pay being cut. Banks have… Read more »

Hopefully this will be recorded and broadcasted as well!

Outsiders by David McWilliams – This is not a review « MediaBite Blog

[…] found one) I thought it would only be fair to put pen to paper and give my thoughts on the "part stand up, part discussion, part social observation" performance. This is not intended to be a review, because I simply wouldn’t know how to […]

David McWilliams takes to the stage « The Entrepreneur Show.com

Week of Theatre « 10 Questions About…

[…] a commentary on post-Celtic Tiger Ireland. It was called Outsiders and was more of a monologue by David McWilliams. He’s an economist. And not to kill the ending but my favorite parts were when he talked about the […]

Travelareo » The Pavilion Theatre – Out of the Ashes

[…] another occasion, I attended the thought provoking one man show ‘Outsiders‘ hosted and starring economist David McWilliams, one of only a handful of prominent commentators […]

The Pavilion Theatre - Out of the Ashes | Dublin Spotted by Locals

[…] another occasion, I attended the thought provoking one man show ‘Outsiders‘ hosted and starring economist David McWilliams, one of only a handful of prominent […]