Bank investors will not be our ‘saviours’!

If you only look at one chart today to understand the story of Bank of Ireland, this is the one here. 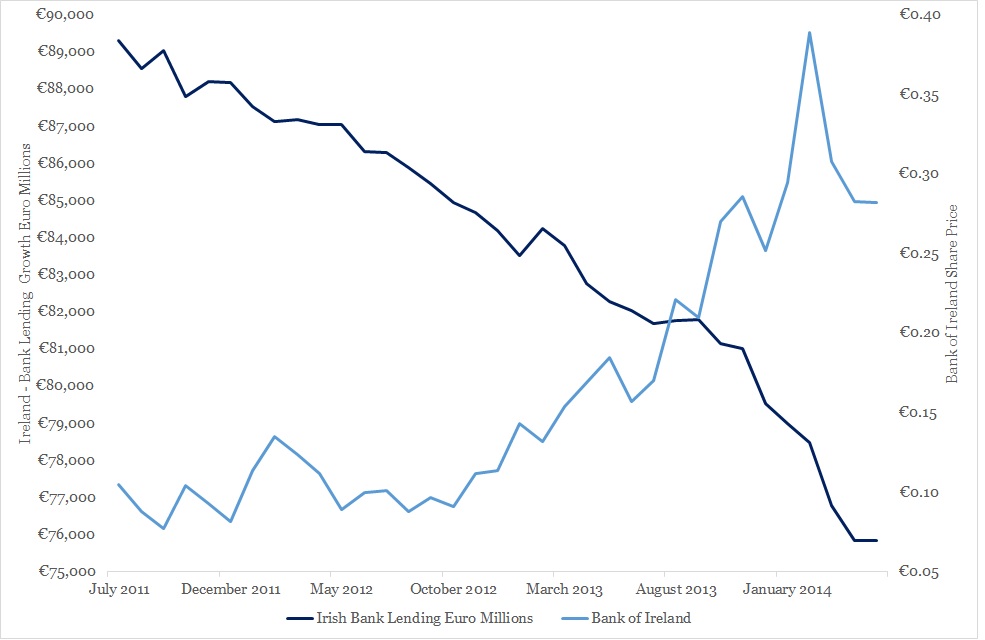 It shows the movement in the share price of Bank of Ireland since Wilbur Ross bought his stake and it contrasts this upward movement with the downward trajectory in the amount of money lent into the economy during the same period.

Mr Ross made his tidy profit. That’s what he is paid to do and no one can begrudge this.

The government spin at the time was that his investment was good for Ireland; it wasn’t. It was good for Mr Ross but not for the economy in any material way. It is not Mr Ross’s job to provide financial assistance for the Irish economy. It is his job to make money, which he has done.

But the line spun in 2011 was that Mr Ross’s position would ensure that the biggest and least wrecked bank in the country would be in a position to lend again to the fragile economy. This has not happened. Overall lending to the economy continues to fall rapidly – as you can see from the chart.

Bank of Ireland’s share price has risen, yet lending to the economy has fallen.

And lending by Bank of Ireland has fallen – not by as much as the rest of the banks – but it is not bucking the trend in any significant way. So what is driving Bank of Ireland’s share price upwards?

It has risen because of “hope” value. The hope is that at some stage it will begin to lend rather than hoard money and, therefore, it will become a normal bank again. This will most likely happen at some stage.

Banks want to lend. This is how they make money. However, when a bank’s balance sheet is destroyed by bad debts, the bank has to get more money in than it is lending out, so that its loan to its deposit ratio comes back down to prudent levels. This means taking in more deposits and lending out less money. And this is what has happened here.

Meanwhile, Wilbur Ross – who said only three months ago that he was a “long-term” investor – has bailed out.

He bought his initial 9.1pc stake of BOI in late July 2011, when the share price was 10 cents. Ross was among a group of North American investors who took a 34.9pc stake in BOI following the Government signing up for the EU/IMF bailout. This stake saved the bank from full nationalisation by what was described at the time as a “Houdini-like escape”. The move reduced the State’s equity from 36pc to 15.1pc, with Mr Ross confident at the time that “Ireland will once again become a Celtic Tiger”.

Mr Ross exited Bank of Ireland in two stages. Following a sale of a chunk of shares this March and this move now, Mr Ross is expected to, more or less, treble his profit on his original investment. Now he has off-loaded his remaining 1.8 billion shares and made himself an estimated profit of €560m.

Fellow investor Prem Watsa, who joined Mr Ross in the initial March sale, has stated that he will hold his remaining 5.8pc stake for the long run and that the decision by Wilbur Ross to sell was “unrelated to business”.

Ross announced that one of the other investors who saved the bank in 2011, Fairfax Financial, was “aware of the trade, but did not participate in it”.

Ross, known as “The King of Bankruptcy” in the US, has said that his actions are in no way a reflection on the future prospects of BOI or the Irish recovery, stating both are “right on track”.

Ross has indicated that a desire to diversify his investments prompted the move, saying “with the continued appreciation of our bank holdings, we were getting so concentrated in banking that we had to cut back”.

In fairness, when you look at Mr Ross’ investment portfolio (from gurufocus.com), it shows that as late as March, it had 28pc of the total in banks and, obviously, he doesn’t want to be so exposed to an Irish bank.

He is also selling into a demand for Irish assets, but that demand is materially affected by having such a big beast as Mr Ross having such a big position. Without his presence, will it lead to investors second-guessing the strength or otherwise of Bank of Ireland?

Until the chart shows bank lending rising, not falling, there will be doubt about Bank of Ireland. After all, a bank that doesn’t lend isn’t a bank. Until it does – in a material way – it is little more than a safe deposit box, good for hoarding but not good for lending.

Mr Ross has done well for Mr Ross. Others will now pick up the stock at €0.26 and hope that it goes up from here.

However, the moral of the story is that people the Irish State is trumpeting as our saviours have little interest in staying here.

The “natural owners” of Irish assets are Irish people and if we end up buying at a premium what we sold at a discount, it just reveals how badly we have played our hand.

David McWilliams hosts a debate on the future of Irish property prices in Dalkey on Sunday, June 22. Tickets at www.dalkeybookfestival.org.

So, in theory the irish government could offload some of its shares in BOI and make – oh let say … 2 billion – and use this towards the 2 billion in savings/cuts due at next budget? I look forward to such an intelligent choice being made by our parliamentary overlords.

Recently more shares have been sold by US Company Executives on the markets than ordinary punters and this is a worrying thought for what is in store to come .The Rally is OVER sooner rather than later .

Its Time to SELL .

Watch the new trend to unfold when Tesco slowly edge themselves from the Food Market to allow Aldi and Lidle consolidate and then they enter the Retail Banking ………and take over Bank of Ireland .

Good morning David. Your Wilbur Ross story just underlines the answer I gave to Tony Brogan on your last blog. Here it is again: “Tony, my main reason for supporting Ireland in the Euro is based on my understanding of what happen to the Asian Tiger economies during the 1997 Asian Financial Crisis. http://en.wikipedia.org/wiki/1997_Asian_financial_crisis. If those independent Asian countries had a common currency like the Euro they would not have been ruined by what amounted to a bank run by hot international investment money. To me the lesson is: if George Soros can “short” the Bank of England (which he… Read more »

atchman: ask any military tactician or any ordinary soldier – straddlers are dead ducks. Loners are always viewed as prey. Perhaps the Icelandic currency was too small a prey for the vultures to bother with.

I should add that the first criteria of sovereignty is to be rid of the central banking system and revert to money from Treasury. The second is to suspend production of money once demand is sated. That volume of money should never increase as if it does it is inflation being induced which robs the frugal. There is a solid case to demonstrate that an economy can and will grow without an increase in the money supply. Then the sovereign country moves to repeal legal tender laws so people may use whatever money they wish to engage in trade. Then… Read more »

Happy Full Moon Day ….and its Friday 13th This week formed part of the 7 days before the Full Moon has been extraordinary both at home and world stage ….and all of this is forming the era of the Blood Moons . Shatter has gone and that is bad news for us as Irish .Precedence has shown in the few blood moons that arrived since the birth of Christ that punishing a Jew is a bad omen and those that show charity to a Jew as America has done gained economically . The recent advance in Iraq is more in… Read more »

Perhaps following the lead of china and other countries would be the saviour of the country.

China is the largest buyer and the largest miner of gold in the world.Guess who has been selling? Westerners.

Perhaps your man, Mr. Ross got out just in time.
I see the Deutsche Bank are looking for 11.6 billion,

Does this mean that the dominos will start falling again in September or October?

“The “natural owners” of Irish assets are Irish people and if we end up buying at a premium what we sold at a discount, it just reveals how badly we have played our hand.” I actually think Bank of Ireland is a good investment – BUT only in the very very long term. Eventually it will start lending out again, super long term the economy will grow again, get over the debt and B of I will be at the heart of that, like AIB. The stock is not a bargain though at the moment by any means. If you… Read more »

Question for you:
If they fine the banks then who is going to pay the fine?