Bonanzavirus has struck Ireland this election, and there is no antidote 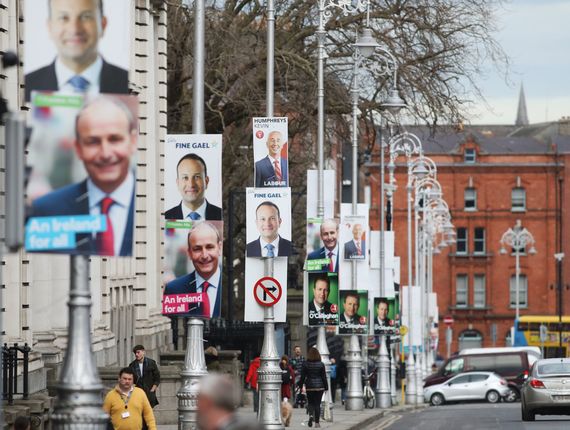 Bonanza
noun
a situation which creates a sudden increase in wealth, good fortune, or profits.

The bonanzavirus has struck. It is a dangerous, fiscal virus spread by politicians, and is particularly virulent in the excessive heat of an election campaign. The increasing political temperature, cramped living conditions and survival instinct change the economic molecules in politicians’ heads, coaxing them to abandon all budgetary decency.

The first signs are misleading. It seems like a normal, run of the mill, political ailment, defined by promises of schools, houses, pensions, wages, hospitals and all sorts of other “free” goodies. But this has developed into a bonanza and all classes of delights are vowed.

The bonanzavirus is highly contagious, spreading rapidly from politician to politician. It is believed to be airborne and is amplified by proximity to TV cameras. That said, any microphone, no matter how insignificant the media outlet, appears to affect the disease’s transmission.

The rate of infection continues to amplify as we approach polling day. In time, they all catch it. In its latter stages the bonanzavirus induces a form of economic insanity, a psychosis where reality disappears and the patient lives in a parallel budgetary world, where black is white, night is day and everything is free.

There is still no known antidote to the bonanzavirus.

It induces a type of economic hallucination, a political nirvana if you will, where people who have never managed an engineering project suddenly acquire the managerial skills of a “mega-project” executive, where people miraculously develop the ability to “magic” hospital beds from nowhere.

People who have never managed a national budget conjure up tax and growth rates and imply that the country can pay for the bonanza without making anyone’s pocket lighter.

It is thought that the only known cure for the bonanzavirus is reality, but this is hardly a consolation because usually the lasting effect of the disease is a recession, as the inflation generated by such an injection of borrowed cash into an already hot economy, drives up prices for various contracts, spilling over into general inflation.

Typically, in a country with its own exchange rate (a kind of immune system for fighting infection), the exchange rate would fall to rebalance the economy, allowing the society to trade through this virus. Unfortunately, Ireland has given away its exchange rate, so it cannot fight the bonanzavirus in the normal way.

As the rest of Europe has been successfully quarantined from the Irish bonanzavirus, the prevailing rate of interest will remain unresponsive to the local infection, making the domestic inflation more acute.

As home-grown inflation rises, the profits in home-grown companies fall. This imperils domestic business which employs more than seven people in 10 here. The surge in spending associated with the virus will coax local businesses to believe that the new higher demand is permanent. This naturally drives small businesses to expand more.

Rents rise as the landlord class reacts in age old-fashion. Such expansions usually lead to new debts. As a result, increased debt diminishes the ability to fight the infection once a recession hits.

Internal inflation is magnified because, understandably, wages rise to compensate workers for rising prices. But given that wages are the biggest domestic cost in Ireland, the costs of all the big infrastructural projects, promised during the most electoral phase of the bonanzavirus, go through the roof.

With the domestic private economy buckling as the virus mutates from a spending virus to a contracting one, the Irish economy becomes more and more dependent on multinational companies for employment and tax revenue.

The multinationals, which source most of their inputs outside Ireland and can use tax accounting to offset rising local labour costs, are largely immune to the bonanzavirus. However, international pressure demands that the multinationals pay more of their tax in countries where they generate revenue not just profits.

This means that the Irish budgetary base, already enfeebled by the spending commitments of the virus, becomes more fragile and more dependent on foreign multinationals – right at the moment when the multinational corporate tax take is increasingly precarious.

All the while, what was once a young society is getting older and pension demands are putting more strain on the working population. Permanent liabilities, which resulted directly from the virus, increase and this increase is structural, related not to the economic cycle but to the demographic reality.

In a short period, a healthy, world-beating economy that was growing robustly, generating levels of employment and rising levels of income unparalleled in its history, is struck down by a political bonanzavirus.

This damages the internal organs through overheating, prompting an unnecessary recession, making us more dependent on multinational revenue which itself is under attack from our EU partners. After their stout defence of Ireland during the Brexit crisis, there is a bill to pay to the EU and it will be paid in multinational corporate tax revenue.

The virus is now in its most dangerous phase. The only way to avoid it is self-protection. When close to a politician for the next week, a surgical mask alone won’t suffice. Ear plugs would be helpful too, as would a healthy dose of economic common sense.

Be careful out there!