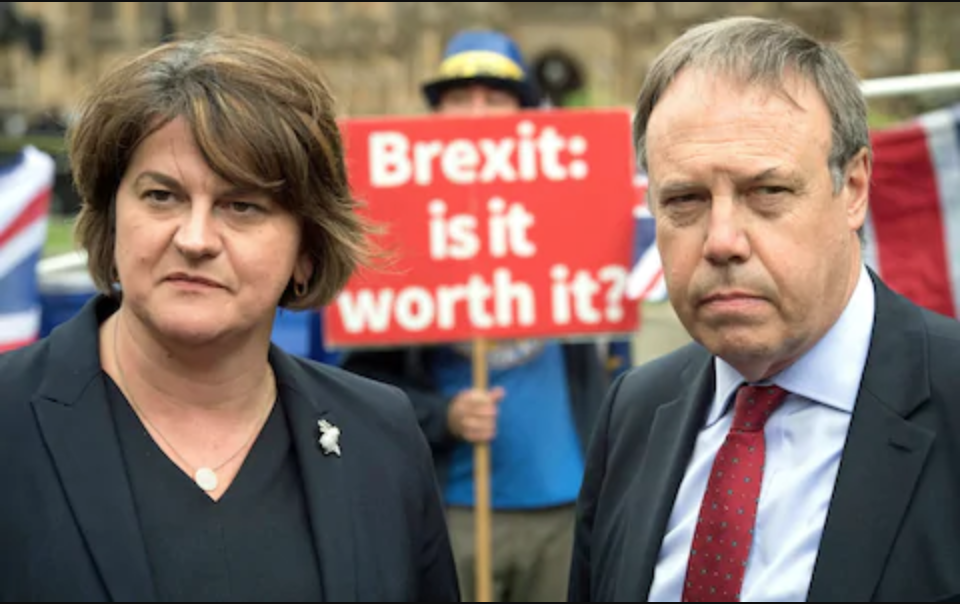 Being best man is always a tricky business; being best man at a North-South Co Down marriage in July 1994, came with a whole new set of challenges.

The speech was a minefield. When you are involved in a ceremony officiated by the moderator of the Presbyterian Church in Ireland, you are alert to the cultural fault lines between the North and the South, not so much the well-signposted differences, as the disguised incendiary devices primed to go off even when you think you are on safe ground.

The morning of the wedding, the groom and I met the minister in the austere surroundings of a small Presbyterian church outside Bangor. My Catholicism is so lapsed as to be totally useless in situations like this; the groom had not even been baptised. There was a bit of “a lapsed Catholic and an atheist walk into a bar” feel to it all.

It had also been a bit of a big night as loads of us, southern and northern friends, had converged in Belfast in advance of the big day. Nothing triggers the hungover heebie-jeebies as much as the sight of a minister with Bible in hand.

At three on the dot, the guilty pair of us stood at the altar waiting for the bride. The entire right side of the church was full: punctual northern Presbyterians, Anglicans, Methodists and the odd bonneted Plymouth Brethren great aunt, sitting erect, expectantly. There wasn’t much smiling going on but, as I’ve learnt, that’s their way in God’s house.

It is universally acknowledged that brides are usually late, but congregations are supposed to turn up on time. As we looked down from the altar, almost every pew on the left side, the Dubliners’ side, was empty. The southerners had, almost to a man and woman, observed the great Irish ritual of the swift one before the big do.

This was in the days before mobile phones. Abandoning the pagan at the altar, I had to barrel down the road in the minister’s shiny red Vauxhall to shoo these Dublin reprobates out of the boozer and into the church.

The bride’s Presbyterian father advised their driver to keep circumnavigating. It was going to be a long day, and it would take more than champagne, confetti and the trickiest speech of my life to break the cultural ice.

The bridesmaid couldn’t stop laughing at these ridiculous Dubliners, their casual attitudes to ritual and their rather pathetic best man, who was trying to keep the whole chaotic show on the road, one off-the-cuff remark away from catastrophe.

Then reader, she married me.

That bridesmaid and I have been a couple now for 25 years, an ongoing education for me in the intricacies of Northern Ireland. It’s been a long matriculation. Just when you think you are ahead, you are pulled back to earth.

Our children are the Good Friday Agreement incarnate, born in east Belfast, brought up in south Dublin. The fact that I was the only expectant father at the hospital’s pre-natal classes not in a full Rangers tracksuit, tells you all you need to know about the ethnicity at the Ulster Hospital in Dundonald.

Although it may be unrepresentative of Ireland right now, our type of family might well be the functioning model for the future Ireland, a new shared island.

Until Brexit, we never really argued about politics. The Good Friday Agreement had settled things.

But Brexit has changed everything: not only did it split the Northern family – with some voting to leave the EU and others to remain; but it also changed the conversation.

We are more aware of the stakes and the fact that my teenage children and their cousins up North are now on a different trajectory to the one we had imagined.

Even before Brexit, the ground was shifting. The 2011 census in the North shows that Protestants and Catholics are almost evenly split.

Digging deeper, the data reveals profound variation in the proportion of Catholics and Protestants in various age groups. Of the elderly, those over-90 in the North, 64 per cent are Protestant and 25 per cent are Catholic (9 per cent had no declared religion). This division reflects the religious status quo when these people were born, in the 1920s, and more or less reflects the realities of partition.

The numbers underscore the sectarian buffer that was supposed to ensure Northern Ireland remains Protestant and unionist. However, that didn’t envisage the dramatic flight of middle-class Protestants to universities in Scotland and England. Few come back. Today, that sectarian buffer is wafer-thin and getting thinner.

The increasingly neurotic public displays of fanatical loyalism in Protestant areas of Northern Ireland could be evidence of a heightened sense that massive constitutional change is a looming possibility.

I’ve been travelling around Ulster recently, taking in the views from rural Markethill in south Armagh to the prosperous King’s Road, Belmont and Stormont suburbs of east Belfast, and from coastal fishing villages of the Ards Peninsula to the council estates of Cookstown in Tyrone.

I have seen Union Jacks and even UVF flags where I never saw them before. The anxiety of Unionism about the ticking demographic clock is captured by this “backs-to-the-wall” display of extravagant loyalist pageantry on the streets.

On present trends, Catholics will be in the majority in Northern Ireland by the end of the next decade. Of course, being Catholic doesn’t mean you are a nationalist but it’s a fairly good proxy. In a taste of what is to come, unionist parties lost their majority in Stormont for the first time in 2017 .

The demographic reality in the future is that unionists will have to persuade nationalists to vote unionist to preserve the Union. This is a big ask. In contrast nationalists have to do nothing, just wait.

Therefore, in terms of political strategy, the massive challenge is upon the shoulders of unionism, not nationalism.

Unionism has one last chance to make Northern Ireland work for everyone. Prosperity rather than Protestantism will protect the Union. And of course, Brexit makes prosperity less, not more likely.

The present DUP leadership is therefore undermining rather than enhancing unionism.

To underscore just how much modern Ireland has changed, there are more overseas-born people on the island of Ireland than there are unionists.

The ball is now in unionism’s court. Maybe for the last time.