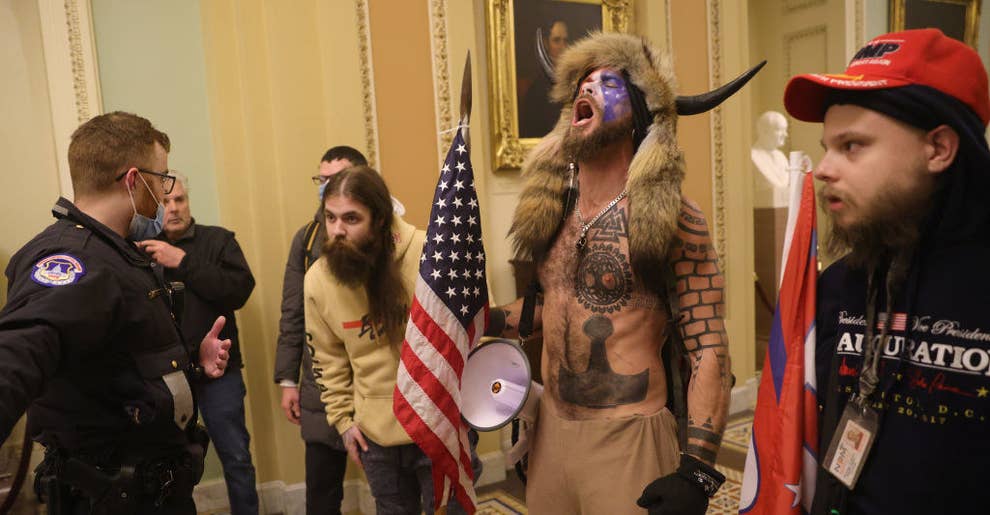 The Jamiroquai frontman look-alike, all buffalo horns and fox pelt, who stormed Washington’s Capitol on Wednesday was the standout character of Trump’s raiding party.

Channelling his inner Daniel Boone, the space cowboy returned to the epicentre of the American republic, vowing to take back control, seize the stolen election and, in true backwoodsman fashion, embody the pioneering spirit that powered the great frontier expansion to the American West.

At least in terms of symbolism, this buffalo soldier was hitting all the right notes. Guerrilla chic is a good insurrection look, but ultimately the world these wannabe revolutionaries want to recover is gone for good and their tribe – white, poorly educated and entitled – is slipping down the global and American social pecking order.

It is this sense of falling backward that inspires such dread in the once privileged. In absolute terms the “deplorables” are not much worse off than they were 30 years ago, but relative to the brown and black people who used to do their laundry, they are sinking.

Such a tribe can’t stand to see people they used to regard as their inferiors climbing up the ladder.

The fact is that the most socially upwardly mobile parts of the US also happen to be the places with more immigrants who look, sound and behave differently from their white neighbours.

Nativism has always been afraid of the “other”. Irish people should understand this as we were once the “other” in the USA, blamed for everything from “mulattoes” to the plague. The 1848 typhus epidemic in American cities was blamed on the Irish, as too was the rise in mixed race children in Philadelphia and New York.

In his brilliant book How the Irish Became White, the historian Noel Ignatiev traces the experience of Irish immigrants and African Americans in Philadelphia’s poor Moyamensing district when the 1850 census noted a surge in mixed-race children born to Irish women.

“In New York the majority of mixed ‘matings’ involved Irish women. In Boston too. A list of employees in the National Brick Company includes a number described as Irish nationalist who are also listed as mulatto’.”

White nativists regarded both the Irish and the African American with disdain; the Irish were regularly referred to as “n****rs turned inside out” and African Americans were called “smoked Irish”. The nativist “Know Nothing” political movement that flourished in the 1850s in the USA stemmed largely from the economic dislocation and threat caused by the arrival of tens of thousands of Irish labourers into the US workforce.

The miserable conditions they faced is evidenced by the fact that for the 1840s and 1850s Irish male immigrant, the average length of life after arrival in America was six years.

The nativist reaction in the 1850s and 1860s only really dissipated in the North when legions of Irish men joined the Union army in the Civil War. However, the nativist antipathy to the Irish newcomer pertained until Italian and Jewish immigrants arrived, deflecting some of the unwanted attention that the Irish had monopolised for about half a century.

It would be interesting to know how many of today’s prominent Trumpian nativists with Irish surnames are appraised of their forebears’ struggles.

In the same way as the nativists of 1850 couldn’t stop the march of the Irish in America, today’s Daniel Boone wannabes cannot to stop the demographic, economic and social changes going on around the globe, in which the US is only a part player.

We are entering a world that by 2030 will look very different to the one that pertained on September 11th 2001. Given that this date constitutes for many Americans the day the world shattered America’s innocence, it’s a good place to start.

For example, according to academic Mauro Guillen’s clever new book, 2030, the percentage of the world’s wealth owned by women in 2001 was 15 per cent; by 2030 it will be 55 per cent. There will be more female millionaires in the world in 2030 than males ones.

The next industrial revolutions will be in sub-Saharan Africa. There are 500 million acres of undeveloped agricultural land in Africa. That is the size of Mexico.

Today, the American and European middle class is the largest in the world, by 2030 it will be Chinese. By then the number of people entering the middle class will be 1 billion; the number of Americans who describe themselves as middle-class today is 230 million. By 2030 that American figure will be 290 million, and thus two thirds of the global middle class by 2030 will not be American.

For a country so used to being top dog, this relative decline is difficult to accept and is part of the angst that the Trump voters feel. As they become relatively poorer, their health will disimprove. For example, half of all Americans are forecast to be obese in 2030.

Cities, traditionally places of social fluidity and tolerance, where people can get on free from the stricture of their homes, will continue expanding apace. By 2030 cities will take up only 1.1 per cent of the earth’s landmass but will be home to 60 per cent of the world’s population.

The changes going on within the US, where the white working man is being left behind, railing against the world, will/are taking place all over the formerly wealthy parts of the globe, namely Europe, Australia, Canada and Japan.

It is not hard to see why these trends unnerve people and why governments faced with this extraordinary technological, social, emotional and psychological upheaval find it almost impossible to control not only the direction of travel but the pace of change.

Turning back the clock is not an option. Tragically, this is what the Buffalo Boy and his buddies, led by their Humpty Dumpty general, Donald Trump, are trying to do.

The best thing Joe Biden could do in a few weeks is drop all that manifest destiny rhetorical schtick, level with the American people and explain to them that managing the decline is the game from now on. If it can manage this, the US – and the EU for that matter – can remain a decent, civilised part of the world with a quality of life to envy for decades to come.

On the other hand, if we fail to appreciate what’s going on in the world, we will all suffer from the curse of the entitled, who rail against change rather than embracing it.