China will use Russia as its petrol station. This is Russia’s – and maybe Putin’s – lifeline 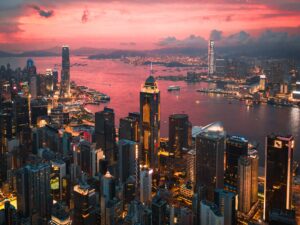 A once-in-a-generation shift in the global economy will profoundly change Ireland – financially, socially and geo-strategically. Events in China this week may seem remote, but they are not. Former leader Hu Jintao, manhandled out of the Communist Party’s 20th congress, was the man who had brought peace and prosperity to China. He ran the show in Beijing from the early noughties to 2012, before anointing the strongman, President Xi Jinping, who is intent on taking China in a very different direction – both internally and externally. A direction that puts it on a collision course with the United States.

Washington immediately banned the export of valuable semiconductors to China. Citing national security, President Joe Biden isn’t messing around. By sanctioning not just US exporters but any US citizen doing business with any Chinese company in the microchip field or even trading in components, the US has made it clear that it’s in a tech war with China that it intends to win.

This latest move is part of a complete redrawing of the global map that now sees China and the US, after two decades of co-operation and mutual trade, squaring off against each other. In his excellent Substack, American commentator Noah Smith describes this juncture as the “end of the world system”.

A rupture between the US and China, allied to the complete isolation of Russia in the West, gives us a glimpse of the coming world order. China will use Russia as its petrol station. This is Russia’s – and maybe Vladimir Putin’s – lifeline. Moscow will sell cheap energy to China and in return China will keep Russia in high-end manufacturing goods. Russia will continue to try to undermine the West via the energy supply weapon. The US and the European Union are likely to become ever closer, politically and militarily, despite the isolationists in the Republican Party.

Ukraine is ground zero of the new reality. The US will continue to arm the Ukrainians. Talk of a ceasefire seems remote right now. The risk that Donbas 2023 becomes Bosnia 1914 is not out of the question as Russia flirts with a “limited nuclear option”; whatever that means.

The old ideas, which have held sway since the fall of the Berlin Wall, such as globalisation bringing peace and prosperity through trade, are now passé, almost laughable. Realpolitik demands, at the very least, that western democracies stand together. Industrially, this means new supply chains, new industries and new investment patterns.

The West will do business not just with the people who can give you the best price, but with people whose worldview aligns with yours. If this sounds woolly, fancy being at the end of US sanctions on the semiconductor business? The US imposed sanctions against China because China is now the enemy.

These realignments constitute a threat to many countries, but they also offer a huge opportunity for Ireland. No other country in the world has refashioned its supply chain like Ireland. Our trade networks have changed considerably in the past two decades, with the US now Ireland’s largest export market. Exports in Ireland have grown by about 11.7 per cent over the past decade, dramatically outpacing economic growth.

Destination-wise, the US now accounts for 28.04 per cent of total Irish exports, with Germany taking 12.07 per cent. In 1995, exports to North America were valued at about €4.1 billion; by 2020, that figure had risen to €56.8 billion. About 900 American-owned firms have their European headquarters in Ireland.

The World Trade Organisation found that global supply chains have shifted since 2000 with the arrival of China on the global stage. One country is an outlier and that country is Ireland, which has made a dramatic shift from the UK/EU orbit to the US. This is now our industrial base. And these huge geopolitical changes and the microchip wars will benefit us.

A key player in this will be Intel, a company going through some short-term problems but one that will have invested $17 billion (€16.9 billion) in its Leixlip lab by the end of 2023. Intel is betting its house on expansion, which is why its share price is weak; money that used to go back to shareholders is going towards massive investment. Until recently, only Intel’s operations in Ireland and Israel had clearance to work on its latest technology, nano technology, so sophisticated it bends light, in order to generate chips that are so tiny we are talking atomic-level engineering.

This is precisely the technology the US wants to keep out of Chinese hands. Only two other companies worldwide are capable of producing the highest quality microchips and both are in Asia. One is in Taiwan (TSCM) and the other in Korea (Samsung), and they are far too close to a revanchist China for comfort.

All tech companies have been badly affected by supply chain problems associated with the pandemic, afflicted by the “golden screw” problem of missing an essential component. In time, they will recalibrate their supply chains, which is exactly what this trade war is all about.

The big shift in geopolitics since the Russian invasion of Ukraine, and China’s swerve away from the US, is that trade policy is now being guided by governments, not the markets. Governments are back. Government subsidies are attracting Intel to expand in Germany, where it has just announced its largest new lab.

These enormous strategic investments do not happen on their own but are part of an international techno-strategic niche. Intel (and for Intel read the US government) intends to hermetically seal access to its technology, keeping it within its US/Ireland/Israel/Germany network. Why wouldn’t it? And this is where the new cold war is playing out. Microchips control all advanced computing and advanced computing is the new arms race. The new realignment of global politics means industrial locations such as Ireland will prosper in the years ahead. Making the most advanced technology in the world acts will be a magnet for all sorts of other high-tech production, a kind of “halo effect”.

Global Ireland is now part of the new cold war, where producing semi-conductors is far more important than producing semi-automatics. Events in China are working in our favour. Technological innovation is the future and, as the global supply chain recalibrates, Kildare – where Intel’s Leixlip campus is located – will emerge as one of its focal points.