Chinese are boxing clever by muscling in on Africa 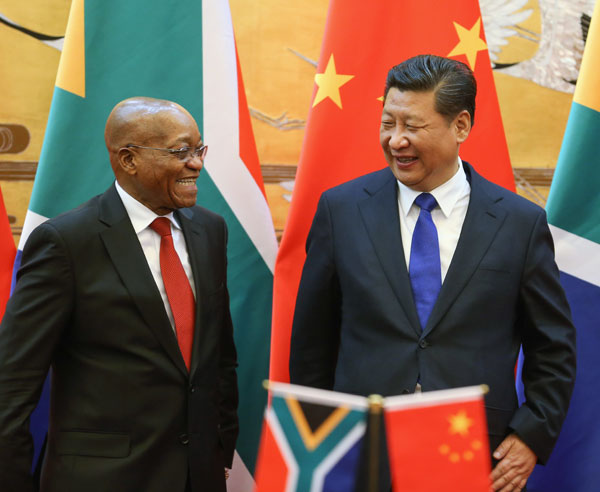 Remember the Rumble in the Jungle? The 1974 Muhammad Ali versus George Foreman fight in Zaire was one of the biggest upsets in sporting history. Ali was supposed to be knocked out by the younger, stronger world champion. Few fighters had gone more than four rounds with Foreman.

Ali gambled if he could last more than four maybe the brute force of Foreman would lead Foreman to tire himself out as he rained blows down on his opponent. But how could Ali survive the onslaught?

This is when he devised his now famous “rope-a-dope” strategy. Ali calculated that he might, just might, be able to absorb Foreman’s blows by lying on the ropes, allowing their elasticity to dissipate the enormous power in Foreman’s punches. He also suggested that Foreman wouldn’t be clever enough to realise what was going on until it was too late.

So Ali lay on the ropes, took a beating in the first four rounds and Foreman did indeed begin to tire. In the seventh, Ali pounced, flooring the jaded Foreman with a well-rehearsed combo. The dope had been roped.

The fight was held in the middle of the night in Kinshasa in order to be beamed into the US at peak evening viewing time, which meant that it was live on Irish TV at 3am.

It was the first time I had been allowed stay up after 10pm. That excitement was bettered only by the fact that my Dad rented a colour TV from Eddie Todderdell in Dún Laoghaire (which he brought back the next day, plunging the McWilliamses back into dull monochrome).

As the neighbours packed into our kitchen, it was the first time I had seen “normal” Africa on TV: a city that looked a bit like cities elsewhere, with well-fed rather than starving children, without a civil war, famine or natural catastrophe in the background.

But why did the fight take place in Zaire (the Congo) rather than Caesar’s Palace or Madison Square Gardens?

This question why they chose Africa in 1974 came back to me last week as I watched teenage boys sparring in an improvised boxing club in Hillbrow, one of the most dangerous districts of central Johannesburg. The kids jabbed and danced under a giant mural of South Africa’s most famous boxer, Nelson Mandela, fists up, ready for battle.

This blindsided me until they explained that Chinese traders had arrived in force, buying and selling, haggling fearlessly. The arrival of Chinese salesmen has been matched by the arrival of Chinese bankers, who are now lending all over Africa at a rate not seen since the Western banks in the 1970s decided to lend to what was then called the third world.

Since 2000, when China lent almost nothing to Africa, it has lent $700 billion to Africa, including South Africa. This is far more than the amount lent by the IMF or the World Bank, the traditional source of financing for Africa. On average, the most indebted countries in Africa owe 17 per cent of their GDP to the Chinese.

The last time African nations were top of the list for finance and easy loans was the 1970s. In October 1973, a year before the Rumble in the Jungle, a coalition of seven Arab states, led by Syria and Egypt, launched a surprise attack on Israel. Taken by surprise, Israel initially lost huge ground and numbers. But, faced with being wiped out, Israel counterattacked and swung the Yom Kippur War in its favour.

The US and Europe supported Israel and, angered by how things played out on the battlefield, Opec took revenge by deploying an oil embargo on the West. This doubled the price of oil from $24 a barrel to $48 overnight, precipitating a recession in the West.

The higher prices led to a massive transfer of money from oil consumers in the West to oil producers in the Gulf. Swimming in dollars, the Gulf Arabs sought to invest these new dollars elsewhere.

Guided by western banks, the new Arab money found a home. It was lent to the commodity-rich regimes of the third world, and a wave of money went from the West to the Arab states and from the Arabs to regimes in Africa and Latin America.

The leaders who got the cash – many of them dictators – spent it on things dictators tend to splash out on: palaces, guns and prestige sporting events. Like the Rumble in the Jungle.

This is how, a year after the oil embargo, western consumers’ money was recycled into Africa. A small fraction of this (but a huge amount) was presented to the boxing promoter Don King by Mobutu Sese Seko, Zaire’s strongman president, to “persuade” him to take a marquee American event to Africa,

That was then. Today, the money flowing from China to Africa is similarly recycled. It is the recycled Chinese trade surplus with America, the imbalance that Donald Trump is making central to his re-election strategy.

As US money flows into China, the Chinese need to do something with it. Given that China relies on commodities from Africa, it has decided to secure future commodity supplies by using tomorrow’s commodities as collateral against today’s loans.

Commercially, as we can see in the markets of Hillbrow, Africa is a huge market for all sorts of Chinese goods. Diplomatically, loans buy China influence in Africa. And, in a new development, China is demanding citizenship for the legions of Chinese workers sent to Africa to build infrastructure.

This means there will be large Chinese communities in Africa, holding African passports and eligible to vote there, in the near future. China’s big bet is that Africa will come good, with Chinese help. This is an essential bet because, by 2100, one in four humans on the earth will be African.

So is it a farsighted geo-strategic play by Beijing or a wasteful bet by a country swimming in dollars? Who knows? But that’s the risk. And, no matter what the odds, risk is the one thing you embrace when you step into the ring.