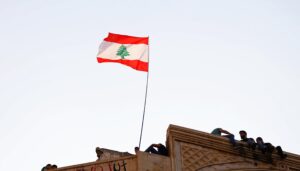 The village bureau de change is protected from the scorching sun by a large cedar tree. We are in Mount Lebanon, a region split between Maronite Christians and Druze. This village is Maronite, and the local people default to French when speaking to foreigners, while among themselves they speak a hybrid of French infused with Arabic.

The patchwork of ethnicities in Lebanon is extraordinary. Officially, there are 21 different forms of Christianity here, as well as Sunni and Shia Muslims and varieties of other sects and ethnic groups from Assyrians to Alawites, Druze and Palestinians. Irrespective of religion, sect or culture, Lebanese are unified by the universal language of money. But in Lebanon money is broken.

In this village, the busiest shop by far is the exchange bureau, changing dollars, euros, Saudi riyals and UAE dinars into the failing local currency, the Lebanese lira. The village boss man George is doing a roaring trade. Lebanon ran out of dollars a few years ago following a Celtic Tiger-style credit splurge, leading to mass bank collapse. Like the Irish banks, the Lebanese banks borrowed from foreigners, inflating the local property market to busting point. The government also got in on the act, borrowing from the central bank to keep cheap loans available to all the various sects and powerbases. All was going well until it wasn’t.

The economy was hit by a few outside shocks, including a refugee crisis from Syria, a collapse in tourism, culminating with Covid and the port blast, which destroyed large parts of Beirut. The property loans went sour, but the banks had borrowed in dollars, lent in Lira and now needed dollars to pay back the foreigners. A bank run ensued which forced the banks to freeze the people’s hard currency savings. Unpalatable as it was, without the government bailing out the banks, the same freezing of deposits would have happened in Ireland. That’s what happens when a banking system destroys an economy.

In the resulting chaos, the Lebanese lira fell by 95 per cent against the dollar. People’s salaries collapsed in dollar terms, while the government still had to pay teachers, police and nurses, and printed money to cover their salaries. Hyperinflation took hold.

In the exchange bureau, the whirr of money is constant as the counting machine doles out worthless Lebanese currency demanded by the locals to pay their electricity bills, groceries and other basics. These people are lucky: they have relations in the vast Lebanese diaspora who send money home. Without emigrant family members, most people are trapped in their worthless currency with their worthless salaries. According to the World Bank, the country’s poverty rate has risen to 74 per cent.

Back in January, the government revealed that more than 50 per cent of the population had registered to avail of social security benefits — funded by the World Bank — with the unemployment rate hovering at about 30 per cent. You know things are bad when the UN is accusing your central bank of “human rights violations” for its role in orchestrating the crisis.

Lebanon is the global canary in the coal mine. As the world moves from an ultra-low interest rate regime to one where interest rates and inflation are rising, what happened in Lebanon — and now is playing out in Sri Lanka — could afflict many other countries, maybe before the year is out.

We’re in extremely dangerous territory. The combination of the pandemic, inflation stemming from many angles from shipping costs to petrol pumps, and food shortages stemming from the Ukraine war mean that conditions are ripe for economic, financial and humanitarian crises across the globe. The UN maintains that “1.6 billion people in 94 countries face at least one dimension of the crisis in food, energy and financial systems, and about 1.2 billion of them live in “perfect-storm” countries, severely vulnerable to a cost-of-living crisis plus other longer-term strains”.

Returning to the Lebanese blueprint, debt levels exploded during the pandemic, with IMF estimates suggesting global debt burdens rose 28 percentage points in 2020, to 256 per cent of global GDP, and are continuing to grow. The Lebanese game of borrowing cheap dollars to inflate the local economy is being replicated all over the “poor” world. As result, Bloomberg Economics has warned of the default risks posed by emerging markets sitting atop some $237 billion in distressed debt. This represents 17 per cent of the $1.4 trillion outstanding in external dollar/euro/yen-denominated debt in emerging market countries.

When the borrowing music stops, everyone is left looking for cash.

We’ve been here before. The early 1980s offers the playbook, when both American interest rates and the dollar rose, condemning countries and companies carrying lots of debt towards defaults. During the 1980s, almost every Latin American and many African countries defaulted, leaving them locked out of the financial markets for a decade. Ultimately, that decade-long crisis came to an end with creditors accepting significant “haircuts” on debt which was never paid back. The US came up with a plan known as Brady Bonds around 1990 which allowed old debts to be retired, replaced by new debts, allowing the countries to borrow for investment again. Now, this 30-odd year cycle is coming to a close and a similar story is likely to play out.

The difference today is the smartphone and how communications make the world much smaller. In the 1980s migration from the poor “global south” was modest largely because of a lack of information. In practical terms, people didn’t know what was going on. Today, migrants on WhatsApp are talking to their families on a daily basis, keeping them up to date. In an interrelated world, it’s impossible to stop people from travelling or at least trying. The West has never been more attractive. Emigration from Lebanon increased by 346 per cent last year, as 79,134 Lebanese citizens left the country in 2021 compared with just 17,721 in 2020.

Lebanon is a small country, imagine similar figures on a global scale?