Dereliction is vandalism and must be stopped 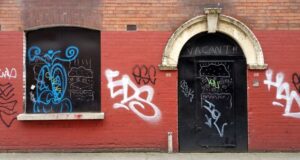 Walking from Limerick train station towards the city centre, an eclectic mix of Georgian and Victorian architecture, takes you past Turkish barbers, Asian food markets and mobile phone fixer-upper shops – all signs of a changing Ireland.

But turn down towards the river Shannon, and the entire first block of Roches Street is derelict – a typical sight across today’s Irish towns and cities. Mocking hoardings promise some idyllic urban future, but the reality is the opposite. The neglect drags down what once might have been a fine street. Parts of Limerick – potentially a wonderful, liveable city – are literally falling down. Dereliction is vandalism and must be stopped.

Many older buildings were jerry-built, and even in their pomp they were unimpressive. Usually they are environmentally wasteful in terms of heating and insulation and are not worth patching up, but the sites must be brought back to life.

Evidence from Asian countries such as Japan (which has performed miracles in terms of affordable housing for a huge population) is instructive. Having suffered a housing boom/bust in the late 1980s, Japan learned a lesson. Now the country renews much of its urban housing stock every few decades. The Japanese regard housing as a depreciating (not appreciating) asset, much in the same way we regard cars. In fact, a branch of Japanese financial accountancy focuses on assessing accurate depreciation rates for houses.

The results in terms of affordable homes have been impressive. Tokyo, with more than 35 million people, has seen housing prices flatline since 1995. Land has been rezoned, churned and built upon intensively.

If we started by using derelict land, we could achieve something similar.

The 2016 census revealed that Ireland was sitting on about 183,000 vacant properties (excluding holiday homes) on the night of the census. Of these, 10,056 were categorised as “Vacant Long Term” and a further 1,544 as “Boarded up – habitable”. Within Dublin City and its suburbs alone, these two categories accounted for about 1,549 properties.

According to the latest GeoView Residential Buildings Report for Q4 2021 (using a different and arguably more accurate methodology), the national residential vacancy rate sits at 4.4 per cent, suggesting there are about 90,158 vacant homes: this equates to close to 1 in 20 houses in the country in the midst of a housing crisis.

Dereliction, often seen as a problem of poverty, is in fact a problem of wealth. Land is an asset and only the truly wealthy are rich enough to let an asset go to waste. Once we appreciate this slightly counterintuitive logic, things become easier. Bringing these properties or sites back to life involves encouraging good behaviour, which demands accurately identifying the buildings and then encouraging development. The site must be taxed to bring the property or the asset into use and to prevent hoarding by making hoarding expensive.

In Belgium, the Wallonia regional government has been praised for its use of water and electricity consumption metrics to pinpoint derelict properties, upon which it levies a fine of €500-€12,500 on applicable dwellings. Adopting such methods in Ireland using existing ESB connections seems like a no-brainer. Once identified, a site value tax (SVT) would ensure that the owners are incentivised to make a more efficient use of these valuable sites in an under-supplied housing market.

The concept of a SVT is quite simple. The value of any given site is derived from two components: the land on which it lies, and what you decide to put on top of it. A SVT is a charge on the unimproved value of land, meaning the total value less the value of whatever capital has been built on top of it. It seeks to capture the rental value of the site and, as such, is all about location.

In short order, derelict sites would be developed or sold, either to commercial builders or to the State, which could use the land to build local authority houses. Wealthy owners of idle property would move to develop in order to avoid the tax. Land speculators would think twice about buying, hoarding and waiting. And if existing owners are too poor to develop, as is regularly argued, they would sell to avoid the tax.

The subsequent selling of sites would push down the price of urban land, breaking the chain of relentlessly upward land prices.

So what type of homes could be built on these reclaimed sites? According to latest research, it doesn’t really matter as long as homes are built.

One of the obvious consequence of having too few homes is that everyone shunts down. By this I mean, if there are not enough exclusive homes for rich people than they will buy the homes that used to be the preserve of the middle class. The middle class will then shunt downwards.

So homes that were once solidly working class are bought up by middle-class people elbowed out of their traditional areas by richer people who just out-bid them. This is why old council estates, traditionally homes for the industrial working class, are now full of barristers, marketing executives and journalists. Then the children of former council estates move out to commuter towns because they have also been priced out.

Finally, the shunting process stops as the poor, who are now priced out at the cheap end of the market, end up homeless or on various subsidised rent schemes.

Shunting is a facet of all modern housing markets. Although it sounds counter-intuitive, more posh housing helps everyone. It’s not ideologically neat, but nothing is – thankfully.

The latest in a long string of academic research illustrating the role of increasing all housing supply in lowering prices comes from Finland. Capitalising on administrative data which tracks where individuals live, the researchers could see people moving from one home to another in and around Helsinki. They observed the impact of newly built luxury apartments on the city’s housing market.

“For each 100 new, centrally located market-rate units, roughly 60 units are created in the bottom half of neighbourhood income distribution through vacancies.”

The implication is clear. More homes means more homes, and shunting allows the housing market to recalibrate. A combination of homes at all prices helps; from social housing, middle-class homes, rented apartments, and even exclusive penthouses. The housing market ends up as diverse as the society: rich, poor and everything in between.

The solution to too few homes is more homes, built largely – but not exclusively – on already serviced derelict sites, made attractive by the imposition of a site value tax. Our towns and cities will be transformed because homes, rather than retail shops, are the metropolitan future, and a SVT will cause land prices to fall not rise.

Is there a bigger political prize?