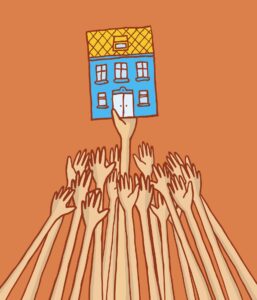 When one of the least densely populated countries in western Europe has among the highest rents and land prices in western Europe, it is the result of a combination of poor planning, poor use of space, local inflation, vested interests and inertia. Ireland should not have a housing problem. Housing is about space and use of space. Hong Kong’s housing dilemmas are easy to comprehend, too many people living in too small an area, but in Ireland, it doesn’t make sense. What is going on?

It’s not that successive governments do not care, but they don’t care enough. To put it another way, the obstacles to a normally functioning market for accommodation, where people can afford a place to live, are seen as too enshrined to overcome. The system, an inherited hotchpotch, is being protected and although many people suffer, plenty of other voters are doing just fine, quite happy with the status quo, having done quite well from the bricks and mortar bonanza. For the housing and rental market to work, house prices must fall in relative and absolute terms. This implies some people’s wealth needs to contract, to give others a chance. Are you ready for that?

The difference in affluence between those who own their own homes and those who rent in Ireland is off the scale. Most recent figures show that median net wealth of families who own their own home reached €304,000 in 2020. But for families who rent and don’t own a home, the median wealth is €5,300. This means that families who own their homes are about 55 times wealthier than families who rent. Even without housing, taking into account other assets such as deposits in the bank or shares, homeowners still have about eight times more wealth than their renter counterparts. So the security of having your own home contributes to building other forms of wealth. You have a stake. Children of renters are obviously at a huge social disadvantage. As about 70 per cent of Irish families own their homes, a large proportion of the population has a personal interest in maintaining the status quo.

A few years ago, I hosted a programme on RTÉ called Ireland’s Great Wealth Divide, and the figures since then have become even more stark. The wealthiest 10 per cent of families have net household wealth of more than €788,000 while the bottom 10 per cent of families have less than €600. Wealth inequality and income inequality are not the same thing. Our tax and social welfare system works extremely hard at trying to make sure income inequality doesn’t get out of hand; however, the same governments that are working so hard at minimising income inequality are letting wealth inequality get out of hand through a rising housing market. Increases in house prices over recent years have seen housing wealth revalued upwards. Every single day that house prices rise, this wealth disparity gets bigger.

House prices rose 10.8 per cent in the 12 months to September. Dublin prices are up 9.2 per cent, while prices are rising by 11.9 per cent in the rest of the country. As interest rates rise and inflation eats into income, prices are moderating a bit. The median price of a house in Ireland is just under €300,000. Blackrock in Dublin is the most expensive postcode with a median price of €725,000, while Ballyhaunis in Mayo was the least expensive at €125,000. As houses prices rise, more people are left behind, and these are our young people.

According to data from 2016, most renters are under 35. In the 1990s, the typical renter was 26 years old. That age threshold continues to rise, as fewer people in their 30s can afford to buy their own place. The number of 25-34 year olds living independently and owning their own homes has fallen from 60 per cent who were first-time buyers in 2004 to just 27 per cent in 2019, and this figure is likely to have remained the same or fallen since then. In terms of wealth, those aged under 35 make up the largest percentage of both decile 1 and 2, the two poorest net wealth categories. Ireland has a massive generational wealth divide.

Not only are the young being locked out of the wealth upswing implicit in home ownership but an increasing proportion of their income is going on rent, making it harder to save for a deposit to get on the property ladder. Nationwide rents rose by 14.1 per cent this year, the highest increase ever recorded in the State’s history. The national average monthly rent now stands at €1,688. The 14.3 per cent annual jump in Dublin is mirrored by a 14.5 per cent rise in other cities and a 13.8 per cent rise in non-city/rural areas. It is driven by the catastrophic collapse in the stock available to rent. There were only 495 rental properties listed in Dublin in September.

The situation is now untenable and the entire political direction of the country will be rightly determined by housing. The solution is to build and build and don’t stop. It won’t be solved by one administration, but by a commitment to proper planning, more population density and rapid deployment of the legal, financial and governmental mechanism to build homes. The Central Bank estimates, based on population growth trends, we need 35,000 new homes per year and every year until house prices start to fall relative to income and become affordable.

Anyone who thinks the solution to too few homes is not more homes is not serious about solving this crisis. And this means serial objectors. You don’t have the right to a view or silence or peace and quiet or whatever spurious nonsense is used to disguise blatant self-interest. Spurious planning objections amount to anti-social behaviour. There are planning guidelines and if they are met, we should build away. Otherwise we will have a generational conflict here, where the young, without a stake become understandably radicalised, and the old, with all the fruits of the society, become more reactionary. This is not a recipe for social peace. The old will have to give up some of their wealth to give the young a hand.

The best way to fix the problem is to reward intensive land use and punish hoarding, borrowing from the writing of Henry George, a 19th-century economist. His site value tax (SVT) is quite simple. The value of any given site is derived from two components – the land on which it lies and what you decide to put on top of it. A SVT is a charge on the unimproved value of land – that is, the total value less the value of whatever capital has been built on top of it. It seeks to capture the rental value of the site and, as such, is all about location.

A detached three-bed house in Dublin’s suburbs is worth €450,000. The build cost of the house is estimated at about €300,000, leaving the land value at €150,000. Under a 1 per cent SVT, you’d be looking at paying SVT of €1,500 per annum. Obviously the State can play around with the numbers, but the idea is that you tax location primarily because most “good” areas are also likely to have the best schools, hospitals, public infrastructure, amenities, transport, sea views and the like, all paid for and financed by the general citizen but the upside is captured by the wealthy homeowner. The site value tax helps eliminate hoarding and dereliction, but doesn’t penalise renovation or building.

The prize is not some economic nirvana but a decent society where accommodation is about dignity, not wealth. A society that gives every child a fighting chance.

Difference in affluence between those who own their own homes and those who rent in Ireland is off the scale - hgsss.org