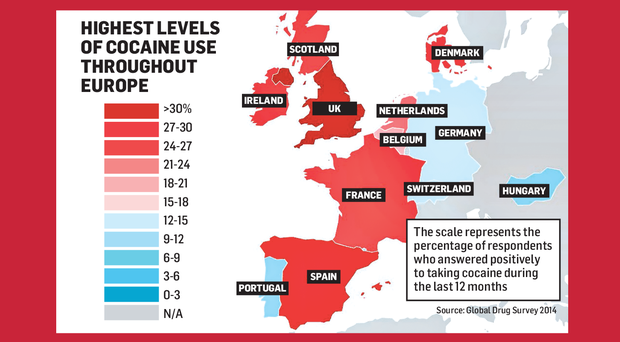 Did you know there is an acute cocaine shortage in England at the moment? The scarcity is made all the more acute due to the fact that the World Cup apparently drives up cocaine consumption dramatically. According to dealers, good weather and an evening match has the Brits (who are Europe’s biggest consumers of cocaine, according to the EU) gagging for cheeky lines, first when they are boozing before the game and then afterwards when they want to keep marching.

I was appraised of this cocaine shortage while reading ‘Vice’ – the online news site – which was valued this week at €2bn in a deal with Time Warner. An English dealer explained to Vice.com how the first English match day of the World Cup would pan out for him as follows.

“The England-Italy game is a 11pm Saturday kick-off, so if it’s a sunny day people will start early and I should be getting repeat sales throughout the evening into the morning – and if we win, even more for the celebrating afterwards.”

There’s no reason to believe that Ireland is any different. In terms of drug consumption, Ireland comes just below Britain on the top of the league of European drug-takers.

The EU’s report on drug-taking estimates that around a quarter of Europe’s adult population have taken an illegal drug in their lifetime. Unsurprisingly, cocaine and cannabis are the most popular – the report states that, throughout the continent, around 2,000 tonnes of weed alone is smoked each year. This is a lot of stoned people.

Ireland comes up close to the top of the cocaine-snorting, pill-popping, weed-smoking league and when it comes to painkiller abuse, Ireland comes out on top.

This means that there is an enormous drug economy here. Now, you would have to have been living under a stone not to notice this.

In recent months, beginning with Italy and Spain, the EU has been urging national governments to tot up the “wages of sin” – money spent on drugs, prostitution and pornography – and add this illicit economy to the GDP figures to get a better idea of economic activity in each country.

If we add all this up for Ireland (using estimates based on other countries’ consumption), we would probably push up GDP by quite a bit – thereby, among other things, reducing the absolute figure for austerity cutbacks needed this year!

This is not just me going off on a tangent. Apparently the “wages of sin” are all the rage in Brussels and counting is soon to be mandatory.

The European System of Accounts (ESA) has announced, “All member states declare the percentage of GDP derived from illegal activities such as the sex trade, drug and people trafficking and contraband. Countries have until 2016 to comply.”

So let’s try to do a bit of back-of-the-envelope calculation. According to another website, www.havocscope.com, which estimates black market activity all over the world, drugs are quite expensive in Ireland relative to other countries.

According to this site, cocaine in Ireland sells for €100 per gram. Ecstasy trades at €5 per tablet, or 10 ecstasy tablets for €40. A bag of heroin that is filled with 0.3 grams of heroin sells for €20, while 2 grams of heroin costs addicts on the streets of Dublin €100. Poor-quality cannabis resin is reportedly sold in 7 gram batches which are available for purchase for €25, and weed is sold in 6 gram units, retailing for €100. Also, in terms of prescription drugs, 2mg Xanax tablets are €3.50 each.

This means the illegal drug market in Ireland is enormous.

A good way to assess it is to take the British figure, which is published, and apply a similar methodology to Ireland.

Similarly, in terms of prostitution in Ireland, it’s probably reasonable to assume that Irish men are no more virtuous or degenerate than their British counterparts. Therefore, again applying the British figures and methodology would seem like a fair place to start.

In Britain, the National Accounts this September is to include the import, production and sale of illegal drugs and provision of prostitute services into its official economy. The Office for National Statistics estimated this figure to amount to £9.7bn (€12.1bn), based on 2009 estimates (£5.3bn, or €6.6bn, for prostitution and £4.4bn, or €5.5bn, for illegal drugs respectively), representing 0.7pc of GDP. Amazingly, this means that drugs and prostitution contribute more to the British economy than agriculture!

There’s no good reason to believe that drug consumption has changed much since then. However, given that drugs are more expensive in Ireland than elsewhere, the drug figure in Ireland may be actually a higher proportion of GDP.

Spain has just come out with its own figures, showing that last year Spaniards spent €5.7bn on drugs (0.5pc of GDP) and nearly twice that (€10bn) on prostitutes (1pc of GDP!).

If we split the difference between the EU and British drug figures with a nod to the Spanish data and apply these figure to Ireland, we could reasonably say that the ‘economics of sin’ amounts to 1pc of Irish GDP. This is a huge figure of €1.6bn. Just to put that into context, that’s about 80pc of the total budget adjustment which needs to be made for next year!

It’s extraordinary the lengths the EU will go to make their economic targets work, isn’t it? I wonder what those bureaucrats are on over there?

They must definitely be on something because they simply haven’t got a clue about running anything???

To what? Drugs? Prostitution?

Inert Atom I remember when I was a kid and eager to add value to what I was doing and decided to sell my toys and comics .Cash then was scarce and to realise that I would hand in two comics to a second hand shop and get another comic to read free and that seemed a miracle .I use to also at that time collect beanos, dandys , toppers and dells . The dells were the premiums then . There were also the miniature cars like corgies to sell in my self street corner shop .I graduated later to… Read more »

Change that title to “The Economics of The Hedonic Treadmill” and you have the big picture. David Mellor in his Chelski kit isn’t the only one to go for it after a big game, whether in the living room after MOTD if the kids are with grandma or in the various lock-ins. Sometimes the mayhem begins during the match itself, or so I heard on the rumour mill. I try to tell them all that they should have a No Cocaine After 50 because the heart can’t take the pace,but Live Fast,d Die Youngish for a Boomer seems to be… Read more »

The main thing I got from the article is what a total joke this whole GDP nonsense really is. The idea that consumption and spending somehow reflects the state of the economy is just more Keynesian nonsense.

No mention of the Fed’s downward revision on their growth. Expect a lot more of this and even more price inflation in stuff that really matters like food and gas. New stock market highs of course to keep the speculators happy but the real economy heading south. Baltic shipping index at all time lows and full time jobs still falling.

Tax them all I say. Bring them under the umbrella of big daddy and make it all legal.

Provide government licensed drug stores with guaranteed quality at reasonable prices and then it would be a part of the real economy.

The only problem is that it will ruin the drug catels and decrease the underground economy to nothing. As that is all that is left that functions we would be thrown into another downdraft depression.

Nope we have to leave the population to decay and rot without more government help!

If you want to protect yourself frm the hedonistic adjustments of our deranged governments you will read this too and take a note of the contents.

Hi, Very important article but a couple of glaring omissions. First of all: I would say that most drugs are imported here which would contribute negatively to the current account deficit. Secondly: Since the fallout from drug abuse is so destructive to Irish society would it not be the case that the costs for cleaning up the mess are MORE than the sum of money spent on drugs. Since drugs and porn are consumerables with little or no value added in the provision of the good or service there is no value added activity taking place in Ireland. A more… Read more »

Many people have no idea what is going on out there. You can buy Coke for as little as 60 euro a gram. But, people would normally do a deal. You may have a bag of weed some cocaine and a few pills for a certain price. They may also throw in some valium or various other downers for an extra few quid. Total black market economey that is thriving in Ireland. People use it to escape from Irish life. Probably the same reason we have such a drink problem it is an escape. You can buy pure MDMA, Ketamine,… Read more »

Economically, it’s quite interesting to look at the ‘vice’ markets: Drugs are not so good, as so much of the money goes abroad. The channels are incredibly efficient, in terms of costs & employment. The product degrades some sectors (people’s longevity, I believe), but encourages others (night clubs). Prostitution, on the other hand, is simply good for the economy. It’s a pure service, other than some very small clothes, there’s no stock or investment involved at all. It’s also local, so a prostitute in Mumbai is no threat to one in Narvik. With prostitution, people work, they get paid (like… Read more »

Cocaine consumption is also an excellent prediction mechanism for problems in the health service for people in their 50s, and an even better prediction device for pensions who will never get to become a liability on the system. I have a theory about cocaine consumption. Consumption is correlated to the class obsession, income concentration that happens in a society. Therefore locations like London are going to be massive cocaine markets. The greater the level of superficiality, the higher the cocaine usage. The “antidote” in this circumstance might be greater social equality. Britain has a serious Cocaine problem, and Ireland (… Read more »

The latest gimick to increase the statistical measurement of GDP, smacks of desperation.

Almost as bad as trying to increase GDP by driving up real estate prices.

Western civilization is on an intellectual sub-prime journey here. They are intellectually bankrupt. Drugs consumption drives down the productive capacity of a society. It is a measure of social problems, and the failure of a society to intellectuallly grapple with the challenges that it faces.

IOU – a legal cocaine – gives a better buzz! An IOU is a fiduciary instrument to discharge a debt – this is the legal explanation. Now when one actually stands back and penetrates the real meaning of this you enter into the function an IOU provides. What is it? The IOU is in FACT a maneuver to forestall on completing a trade in goods and services with another person. Now the technicians running the system KNOW this fact and through their vital and correct understanding of what an IOU actually means in ALL of its contingencies they can then… Read more »

Given how at least 2 US states have legalised marijuana production/sales – Colorado and Washington – and another half dozen are considering doing so, ending prohibition here would be a genuine boost to GNP – excise, income and no doubt VAT returns. Colorado alone expects to earn $134m in tax in fiscal year 2014. Legal sales of weed amount to €2.34 bn – doubled in just a couple of years since limited legalisation was introduced – and not just for medical purposes. Of course, our crowd would so completely overtax any legal marijuana trade that a black market would quickly… Read more »