Economics Without Boundaries with David McWilliams

Join me at Independent College to find out what has really happened in the Irish, European and Global Economies over the past eighteen months.

The objective is to enable the student to work and thrive in an economic environment such as a bank, financial house, the media, the civil service or a large corporation. 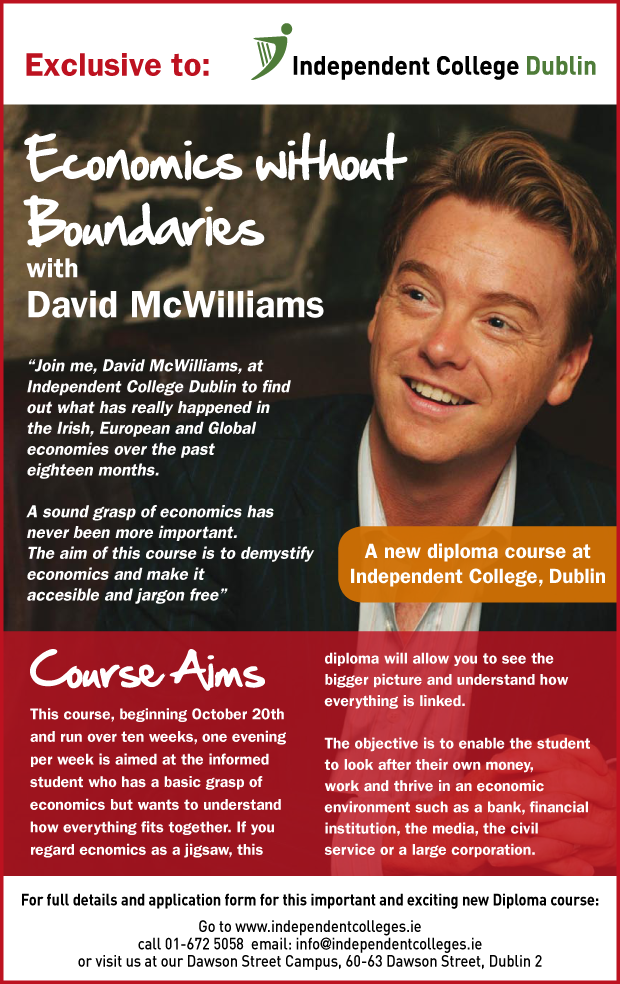 In our opening session, I will present a brief introduction to economic theory. Economists tend to fall into different camps such Keynesian, monetarist, neo-classical or Austrian for example. For some economists, these allegiances are crucial, for the rest of the world it probably seems a bit more like grown ups talking about their loyalties to football teams. But these theoretical underpinnings are important and help to explain why the global financial crisis occurred, why so much of the profession missed it and why economists are divided over how to get out of it..

This reading explains why many economists tend to get things wrong – the ‘can’t see the wood for the trees’ effect. It also addresses why volatility matters, and happens, and why what statistics can’t tell you. Statistics are backward looking. In order to see what the future holds, it is important to see the whole picture – which is what the module tries to lay out.

In order to be an effective economist, we have to appreciate that things go in cycles and that history can tell us many things. History is particularly relevant when it comes to booms and busts. There is a wealth of material in this topic for Irish students at the moment. The two most salient periods are the Great Depression of the 1930s and the experience of Japan in the 1990s. Both stories tell us how the crisis occurred and how we can get out of this mess.

As a counterweight to the “it all happened before” school of thought, we will also examine other ways of looking at the world where paradigms do actually shift

In this module the required reading will be Paul Krugman’s Return of Depression Economics, David Landes’ The Wealth and Poverty of Nations as well as The Ascent of Money by Niall Ferguson and The Lords of Fiannace by Liaquat Ahamed.

Fooled by Randomness by Nassim Taleb addresses new ways of conceiving of the future.

Ireland has experienced of possibly the most dramatic boom/bust cycle of any developed country and the rise and fall has been well documented by David McWilliam’s own books The Pope’s Children, The Generation Game and Follow the Money. These books will be the basis for this evening’s lecture. We will also use the author’s documentaries and his popular economics columns to illustrate the lectures. www.davidmcwilliams.ie

The period 2000-2010 was a classic example of bubble economics and yet the mainstream economics profession missed it. We will ask why and examine how the banks behaved; how the politicians mismanaged the country and how huge borrowed resources have been wasted in the property market. The reaction to the crisis has been telling. This lecture will look at the bank guarantee, the nationalization of Anglo Irish Bank and the recapitalization of the major banks.

NAMA and the arguments for and against it will be teased out in detail, as will the ongoing discussions on what is the best thing to do with Anglo.

On a different tack, the potential positives for the country cannot be underestimated if we can get over this banking mess. We will also explore the inconsistencies in a country which has received more American direct investment than both China and India combined and yet flirts with national insolvency.

David McWilliam’s The Pope’s Children, The Generation Game and Follow the Money.

This evening’s lecture will not necessarily be about economics on the face of it, but the idea is for students to see how interlinked things are. For example, why does a Greek debt crisis mean that the price of gold rises. This is known as Contagion.

The more inter-linked things become the more the risk of contagion. Financial markets and general global liquidity are good examples of this. For example, why did a crisis in Thailand cause trigger selling of Russian assets which in turn caused LTCM – the hedge fund – to go bust in 1998? Or why was Lehman so central to our current crisis and why couldn’t AIG have been let go bust in September/October 2008? Why was Anglo included in our guarantee and was it the risk of contagion that forced the government’s hand?

This evening we will examine the crucial but fraught relationship between China and America. Also we will look at the emergence of Bilateral trade. While this is not new, the extent of the China/America relationship is unusual. China exports goods to the US and imports $.

The emergence of the BRICs Brazil Russia, India and China as new economies is discussed and how this will effect trade and capital flows in the future.

The EU, the Euro and the bailouts are also important in this context. Who’s next and why is Europe attached to expanding a currency that only makes economic sense for a few members?

In this popular topic we will explore a variety of questions together. What is a ‘sophisticated investor’? How good are markets at setting prices? Are markets rational? (answer is obviously no). Why markets are imperfect. What is going to happen to the Irish housing market? How much more will it fall? How might it recover?

Seventh Evening: Bubbles. (or why you can’t trust markets)

What is a bubble – from the infamous Tulip bubble, through the south sea, all the way to the property bubble here. An important point is that bubbles always happen and follow the same pattern. We will look at how to spot bubbles, what is ‘hot money’ and what the next bubble might be.

Here the required readings will be Charles Kindlebergers Mania, Bubbles and Panics; Gillians Tett’s Fools Gold and The Great Crash by JK Galbraith as well as Predictably Irrational by Dan Areily.

We will explore how money works. We will define the relevant terms such as fiat, gold standard, monetary policy etc. We will also examine how banking controls the money supply (and is important for it); why a banking system is important, but individual banks are not.

We will also discuss together the money illusion. This is a critical point to get across, as it is the one that more easily facilitates depreciation rather than cut backs.

This evening is taken up with a lively discussion of risk. Everything has risk involved – even doing nothing is risky. What is a risk-reward ratio? How to manage risk – be flexible. Your position may not change, but the amount of risk you carry will due to outside factors.

Tenth Evening: The Big Trends -Looking To The Future

Why the Internet does and will continue to change everything. The internet means that it has never been cheaper or easier to form a company and sell to a potentially huge audience. This changes the rules and allows the small to become big quickly. Google being a case in point!

Suggested reading on this module is “Wikinomics” by Don Tapscott

Some interesting and useful websites and blogs to whet your appetite

Sounds amazing. Hope it’s going to be a regular course, not just one year.

Hi David,
This sounds fantastic. As I am Cork based, I will be unable to attend the evenings. What is the possibility of running the course distance/Munster based?

john, I will examine what we can do on that score. best david

Dear David
Looking forward to doing the course as over the years your vocalization of reality has been in tune with my inner psyche.I am therefore looking forward to listening to you in person regards Graham

I would like to see this also in a distance learning course. With video lectures of course, that part maybe online.

Would absolutely love to do this. It even fits right in between my two nights of part-time degree. But can’t afford it this year. Maybe next year if you run it again.

Any palns to run a course in London? Im sure theres a good few ex-pats and locals here who would be more than interested. I certainly would attend.

Morning,I am working on a distant learning structure so that those who would like to attend but can’t get to Dublin can do the course. Bear with me. All the best, David

Will this be an annual course or ‘for one night only’?!

Thanks and best of luck with it,
Niall

I too am very keen to find out information re doing this course remotely. I understand this course begins this evening and in an earlier post you had expressed that you were trying to cater for distant learners. Has time run against you, or are you still happy to provide access to the course remotely?

I’ll join the chorus of those seeking distance learning. Based in Melbourne now working “Economic Development” for a large inner city local authority. They may even agree to paying the fees! Aussie dollar strong these days.

Thank you for the suggested reading list http://bit.ly/ewbsg
which will give those of us who cannot attend in person a starting point but a webinar version would be very desirable.

Bringing it into the Irish curriculum at secondary school level would do the future generation a favour too!