Expansion of the middle class is Ireland’s biggest feat 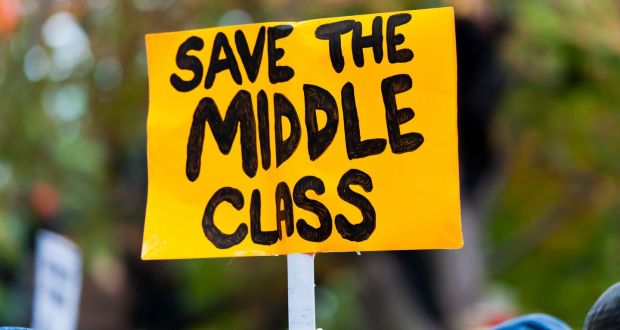 When it comes to celebrating the Republic – 70 years old this weekend – the most significant socio-economic achievement of the State has been the gradual but relentless expansion of the Irish middle class. It might be deeply unfashionable to champion the growth of the civic bourgeoisie, but the expansion of the middle class is a profoundly positive accolade.

In contrast to many western countries that are seeing their middle classes shrink, the data tell us something we know already when we compare our lives with our parents’ lives and their parents’ lives: Ireland’s bourgeoisie is in rude health.

Whether it is cool or not to admit, the middle class provides political ballast to a country, preventing lurches to the extremes. This is no bad thing in a world with its increasingly demagogic flavour.

In international economics there is an expression for any collapse of the middle class. It is known as the Brazilification of a country. Brazil (and Argentina) used to have large middle classes with secure stakes in society. The civic bourgeoisie became the target of the corrupt right and the ideological left so much so that over the past 50 years, the middle has been squeezed by left-wing and right-wing populists, leaving the country unmoored, oscillating from one extreme to the other.

The story of Venezuela, where the greatest humanitarian disaster in the Americas is playing out in front of our eyes, speaks for itself. Unforgivably, the assault on the middle class in Venezuela has been entirely ideologically driven. Three million have left in the past two years. To put that in context, five million people fled Syria over 10 years. But crucially, in Venezuela there is no war, just monumental mismanagement based on a class war in the country with the largest oil reserves in the world.

So when we look around, we can see that the massive expansion of the Irish middle class is something to be extremely proud of and it stems from economic growth. Over the past 30 years – that is, in roughly the second half of the lifetime of the Republic – the growth rate of this country has been phenomenal. Once the economy grows, everything else flows from that. Without growth you can talk all you like about aspirations but nothing will ever be delivered. Economic growth provides the resources to achieve other goals.

Let’s look at a few figures to appreciate what has been achieved here in recent decades.

By the way, no other poor country that joined the EU around the same time – such as Greece, Spain or Portugal – has similar rates of catching up.

If you have growth rates running twice as fast as your neighbours, this allows you to catch up on many other levels. On a much broader basis, it has allowed daily life in this Republic to improve dramatically for the vast majority of the citizen. I am not saying we don’t have our problems; of course we do. But we should not let notions of the perfect bully the pretty good, and what has happened in this Republic has been pretty good.

For example, in 1990 Ireland ranked 24th on the UN’s Human Development Index. Today we are fourth. No other country has achieved this kind of acceleration on this independent index. In 1990 we were in relative terms where Albania, Cuba, Kazakhstan or Mauritius are today.

Let’s look at things another way. In the mid 1970s, just over 20 per cent of Irish women were in the workforce. That rate of female participation is comparable with viciously misogynistic countries such as Afghanistan (19.5 per cent) and Saudi Arabia (21 per cent) today. We were a Catholic caliphate. But as the economy and opportunity expanded, this melted away. Last year more Irish women graduated from university than men. Girls outperform boys in the Leaving Cert.

Interestingly, we see the fruits of this economic expansion, and the expansion of the middle class, very conspicuously in education. In the late 1960s only 36 per cent of Irish children finished school. Today 97 per cent do the Leaving Cert. As late as 1989, only 15 per cent of Irish people had a university degree; today that figure is 43 per cent, ranking us among the best educated-people in the world. Life expectancy has risen from 73 in 1980 to 82 now. Infant mortality is one-fifth of what it was in 1980 and immunisation rates for diseases such as measles have surged from a mere 10 per cent in 1983 to nearly total coverage now.

So social mobility is real in Ireland, and interestingly it is fluid, meaning you can move up and down. Last year Revenue published a study using tax data, which broke down the income distribution into three deciles (bottom, middle and top). Between 2006 and 2015, so taking in the crash, one in five (23 per cent) people remain stuck in the bottom group, while four in five (77 per cent) who were in the bottom group have moved up to the middle.

In the middle decile, there is more mobility upwards (43 per cent) than downwards (36 per cent). More than half (57 per cent) of those at the top hold on to their position. But this also means that 43 per cent of people in the top bracket in 2006 have fallen back to the middle by 2016.

This means that we have social fluidity here. Unlike other countries, where the rich remain rich, in Ireland it is quite likely that you can fall back down as well as scramble up. This type of social churn is extremely important because it means that social class is more transient here than other countries, implying equality of opportunity means something.