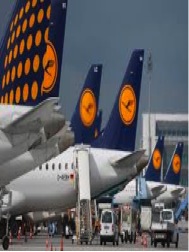 When the Germans go on strike, they really do go on strike. Germany’s Lufthansa will cancel some 3,800 flights in a three-day strike by the pilots’ union hitting more than 425,000 passengers.

The cancellations include domestic and intercontinental connections today, tomorrow and Friday.

A strike over three consecutive days is one of the biggest walkouts in Lufthansa’s history and it signifies two major factors. The first is that German workers want their fair share of prosperity. For many years, Germany’s workers have played second fiddle to corporate Germany and have taken pay cuts and all sorts of work practices to make the Federal Republic more competitive. This was particularly the case from 1997 to 2007. Now with unemployment down at record low levels, the workers want their goodies.

The second issue is chaos in the airline industry where big long-haul carriers like Lufthansa are getting hammered by the emergence of the Gulf carriers with their subsidized fuel bills. The Gulf carriers are attacking the likes of Lufthansa and, as we saw recently, Aussie carrier Quantas, on long-haul. The other threat for Lufthansa in Europe is the relentless rise of the likes of Ryanair eating away at its short-haul business.

In the next few years, the worldwide airline industry is one sector that will undergo rapid change and the Lufthansa strike will be the first of many.

On the markets, the S&P is now trading at all time highs and equity markets in Asia were also higher overnight, following overnight gains in the US market. Japanese stocks led the rally, with the Nikkei up 1.7% as USD/JPY approached Y104. US equity markets rose following a modest increase in the manufacturing ISM (see below). We seem to be back in the world of good news being good news and bad news being good news too.

The overarching theme for the past few months is the idea that US consumers were held back by a rough winter. When March data is released, we’ll find out if it’s true.

An early upbeat sign is car sales. Auto sales increased to 16.3 million units in March (vs. consensus 15.8mn). This is up from 15.3mn in February. Higher-than-expected sales of domestically produced autos accounted for most of the surprise, with domestic American sales rising to 12.8mn units (vs. consensus 12.3mn).

Stronger March auto sales followed three months of softer figures. There also appears to be some momentum with Ford executives saying sales in the final weekend of March were strong. Toyota executives said their dealers had their best two weekends of the year late in the month. They added that  they’re optimistic the momentum will continue into April.

As you can see from the chart below, this improvement in auto sales added to consumer confidence last week, and should feed into an increase in personal spending in coming quarters.