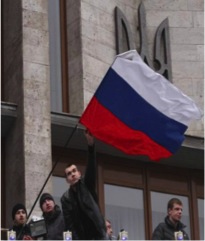 I’ve just come from the CNBC studio here in London which is outside the Old Bailey. For Irishmen of my vintage, the Old Bailey is synonymous with IRA terrorists as well as innocent Irish people stitched up for crimes they didn’t commit. In my head, the Old Bailey is an expression from the 1970s and 1980s at a time when relations between Ireland and England were at their most strained.

Today our President is here in England meeting the Queen. Times have changed.

But the interesting thing is that geo-politics haven’t gone away you know.

Countries fight over land, people fight over ethnicity and ultimately the saccahrine Ivy League world of global markets doesn’t like the messy idea that all can’t be solved by cutting interest rates.

In Ukraine we see these types of ethnic tensions. It looks like the Russians have sub-contracted nationalism out to a bunch of ethnic Russians living in Eastern Ukraine. This idea of the mother country subcontracting dirty work to local hoods is not new.

In this the anniversary year of the outbreak of WW1, you could do worse than read the opening two chapters of “The Sleepwalkers” by Christopher Clark on how Europe drifted to war in 1914. The chapters on the Serbian state’s out-sourcing mayhem to Serbian nationalists in Bosnia should be required reading for anyone trying to get a handle of the Ukraine today.

Russia now wants an unstable Ukraine and it is going about getting that in a hands-off manner.

The outsourced Russian nationalists of Donetsk in Eastern Ukraine have proclaimed a sovereign “people’s republic” independent of the capital, Kiev. The announcement, which was posted on YouTube, was delivered by a protest spokesperson outside a building currently occupied by several thousand Russia supporters, some of them armed.

“Seeking to create a popular, legitimate, sovereign state, I proclaim the creation for the sovereign state of the People’s Republic of Donetsk,” the spokesperson said to cheers from the gathered crowd.

The Interfax news agency reported that the self-proclaimed leaders of Donetsk will hold a referendum on regional sovereignty no later than 11 May. Ukrainian presidential elections have been set for 25 May. The regional news website Ostrov, said the activists wanted to join the Russian Federation in a similar way to the Crimean peninsula.

As you can see from the map below, it is a very slippery slope if we move to a situation where large parts of Ukraine (where Russian speakers dominate) look for closer ties to Russia.