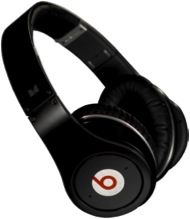 Good morning from a blustery Dublin.

Do you have teenage children? I have one such darling creature and another one soon to screech into his teens, so I know all you need to know about Beats. About this time last year, I became aware of the Beats craze in Dublin, when both my children requested these ludicrously expensive headphones. The sight of white, middle-class south Dublin kids doing their best ghetto black pimp-roll, outsized headphones covering half their heads, trousers slung down somewhere around their knees, is not only comical, but is exactly why Apple is going to pay above $3 billion for Beats in yet another technology deal.

Rapper Dr Dre (the co-owner of Beats) will get a massive payout at a time when Apple is trying to keep ahead of trends in music listening. This is Apple’s biggest deal ever and it makes a distinct switch from Steve Jobs’ preferred strategy of organic growth.

Apple’s i-tunes revenue has plateaued and millions are switching to cloud-based, file sharing apps like Spotify. (I have been a Spotify user since it became available in Holland in 2010.) Beats offers such a service. However, what is really driving Apple’s acquisition is its need to be “cool”. For years, Apple has been cool and hip and the device of choice for the discerning. However, Samsung have stolen these clothes and Apple’s management, largely middle aged white men, know it’s hard to get that back, unless of course you buy it from someone else, which is where the hip-hop cachet of Dr Dre and his Beats come in.

Apple wants to get back inside the heads and hoodies of my wannabe gangsta kids and this is how it’s going to do it. But at $3.2 billion there clearly is a hefty price tag of “the rebirth of cool”. Actually for a great few hours of music check out the late 1990s Rebirth of Cool here.

Let’s head from LA to Russia. Today is the sixty ninth anniversary of the Soviet Union’s victory over Nazi Germany. Be under no illusion, the Russians won the war, not the Yanks or the Brits.

When I first travelled to Russia in 1985 on a university trip, the heavy memory of the great Soviet sacrifices of the war was palpable. So much so that when, in 1990, I studied Russian in a small town to the west of Moscow called Ruza the old Babooshkas called me “Gitler”. Russians pronounce our “h” to sound like “g”. The reason they called me Hitler was that the last westerners these Russian women had seen were Hitler’s troops retreating from the gates of Moscow in 1942!

Today the Russians mark this anniversary, but the Ukrainians are not doing so, which is extraordinary given how many Ukrainians died under the Nazi rule. But as many western Ukrainians sided with the Nazis, the picture isn’t clear as is always the case after wars.

Indeed in the present struggle in Ukraine, it is interesting to see that both sides are deploying World War 2 propaganda, imagery and rhetoric to galvanise their respective sides.

More on this later.

EUR/USD traded to new highs in the immediate aftermath of the ECB statement but, during the press conference, Draghi dropped a bomb suggesting the

“COUNCIL IS COMFORTABLE WITH ACTING NEXT TIME” .

This statement of intent took the EUR/USD sharply lower, back towards the key 1.38 level this morning. But it’s still far too expensive.