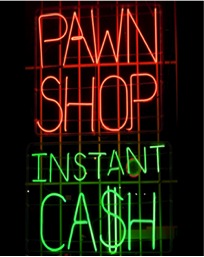 There is hope for us all. This morning the Greek bond sale which aimed to raise €3bn at 4.95%, attracted around €20bn of bids. If anything tells you that the European peripheral crisis is over, it is this. Now the ECB needs to move from crisis prevention mode, to supporting growth. If it doesn’t do this, the crisis will come back.

It is quite simple really. The two-year rally in peripheral bond markets has been rented not earned. It is rented because the rally is based on the ECB’s implied promise to buy all dodgy debts in the Eurozone if it has to. These low yields on massive debts will only be earned when the growth rates increase and this means that the ECB will have to adopt an aggressive form of QE soon to try to overcome Europe’s liquidity trap. (See our note on liquidity traps.)

The ECB is now acting as a large pawnbroker, taking in assets and lending out money for spending today.

If this large-scale pawnbroking doesn’t work, the Eurozone will have to countenance a massive fiscal expansion. This isn’t on people’s investment horizon yet, but it will come. There has never been a deleveraging episode that isn’t followed ultimately by a fiscal expansion or a massive currency devaluation. If you don’t want the devaluation, you have to have the expansion or vice versa.

One other aspect a jittery market isn’t factoring in next week as we celebrate Easter, is an incident in Korea. This year has been the year of geo-political risk from Turkey, Thailand to Ukraine and the place where there is always a risk is Korea.

Next week, we will get the annual South Korea/US military exercises and in the run-up to the 15 April anniversary of the birth of Kim Il-sung, North Korea is staging an unusual number of displays of military strength. What are the chances of Pyongyang staging a more dramatic show of strength before 15 April? I’d say pretty high and with its sabre rattling comes yet another bout of geo-political nerves, the likes of which have jolted emerging markets all year.

On a completely different track, I came across this wonderful chart in the Business Insider last night. It shows the impact of bad weather on growth figures and how the recovery (when nature settles back into a more normal pattern) can be quite dramatic.