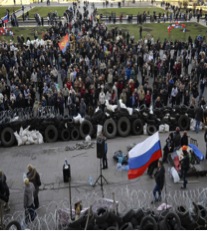 We are seeing the investing world splitting between what could be described as the “known world”  – the US and Europe where things are plodding more of less steadily. One part, the US is growing and the other, the EU, is deflating. The implication for interest rates, bond rates and currencies is more or less known.

However, the other world is the “unknown world”. This is the topsy turvy world of emerging markets which are in their own orbit, characterised by high inflation, current account deficits, toxic politics, budget indiscipline, wildly overleveraged banking systems and inflated property markets. And of course, in Ukraine and Russia, the spectre of war adds more risk to this witches brew.

For the investor, the temptation is to try to go bottom fishing here, given that emerging market currencies have come off so badly, notwithstanding the Turkish rally of the past three weeks. But what happens  if the US continues to produce numbers like the stellar retail sales figure of yesterday?

With such dollar debts and current accounts to be financed, the interest rate implication of an accelerated US recovery, will blow the so-called “fragile five” emerging markets out of the water.

And that’s before we factor in Russia out-sourcing bad politics to its “near abroad”. We can see this in Eastern Ukraine, but what if this were to flare up in Nato members in the Baltics?

It always plays out the same way. Capital flight in a poor country with plummeting growth rates is responded to by the misguided central bank with higher interest rates.  Initially, the currency strengthens and then falls because the economy will contract further when rates bite.

This is playing out now in Ukraine. Expect the currency to collapse in time.

Yesterday the National Bank of Ukraine raised its main interest rate to 9.5% from 6.5%. 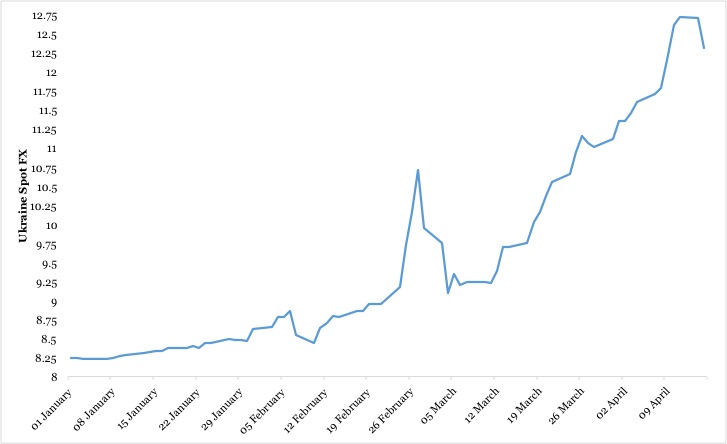 Russian stocks and the rouble continued to perform poorly yesterday (see chart). This highlights our call not to buy the dip in Russia last month. Despite a good bounce, we are now heading back to the lows