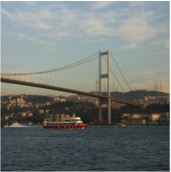 I am looking out over the Bosphorus watching the relentless traffic of massive Russian cargo-ships ploughing through the channel from the Black Sea to the Mediterranean. This traffic is the reason there are unlikely to be any sanctions against Russia unless things get very out of hand in Ukraine. There is simply too much trade.

Being here in Istanbul, allows me to appreciate the proximity between the eastern part of Europe and the West. All sorts of Russian, Ukrainian, Crimean and of course Romanian and Bulgarian cargo uses the Black Sea, not to mention goods from further east. And coming the other way are all sorts of manufactured products from all over the Mediterranean.

This is one of the oldest trading routes in the world, it is the reason everyone fought over Istanbul from Roman Emperors to Crusaders, Sultans and even Churchill who ordered the Dublin Fusiliers on to the beaches at Gallipoli where they were slaughtered by Ataturk’s gunners.

Europe hasn’t got the balls to stand up for Ukraine and Putin knows this. See our piece on how Putin is outscourcing nationalism in Ukraine here.

This morning, Russia accused the Ukrainian government of failing to rein in extremists as escalating tensions threaten to undermine a diplomatic accord. This is reminiscent of the Belgrade government blaming the Muslims in Bosnia for stoking up violence weeks before all hell was unleashed in Bosnia. I don’t think we will see anything like that, but the political tactics are unambiguous.

Ukrainian and Russian officials traded accusations about responsibility for attacks that killed three during the weekend. With pro-Russian forces holding their ground in several eastern cities, skepticism is growing within financial markets that the accord reached by Ukraine, the U.S., the European Union and Russia will ease the standoff. The government in Kiev has said Russia is behind the unrest, exploiting the situation to prepare an invasion. I don’t think they will invade and talking to people here who know the region and understand the Russians, there seems to be broad agreement that the Russians won’t do anything dramatic. They don’t have to, everything is going their way!