Hope you had a good weekend.

A good gauge for the state of the market chatter each weekend is the Lex column in the back of Saturday’s FT and in particular the regularly excellent John Authers’ ‘The Long View’. This week, Authers signed off with the rather blunt sentence on equity markets: “If earnings disappoint, watch out”.

Most equity markets were routed on Friday. Tech names felt the heat once again as the Nasdaq led the way down, but the weakness was across all sectors. Japan’s Topix was down 8% on the week, while in the US  financials felt most of the pain  (-1.1%) mainly because of the headline earnings miss from JP Morgan. This week and next,  more of the  big banks will report.

Despite the equity market weakness, 10y treasuries traded in a 2bp range during NY hours on a fairly quiet day.

To paraphrase Churchill, the spectre of deflation haunts Europe. Early this morning, Italy announced that prices had fallen in March. This comes after Spain reported similar falls in prices. We know that the problem is too much debt, and inflation is the solution, not deflation. If you doubt this, just read the headline of the Spanish paper El Pais this morning. Spanish public debt rose by €8.1 billion in February alone. It is now 96% of GDP yet Spanish yields are falling!

Draghi was out yesterday at the IMF – an institution led by the incredibly unimpressive, Christine Lagarde, and this is what Draghi had to say about the Euro:

“Over the past few months the exchange rate has become more and more important for price stability.

We are aware it’s not the only element, but it has been an important element. So in a sense if you want monetary policy to remain as accommodative as it is today, a further strengthening of the exchange rate … would require further monetary policy stimulus”.

He went on to  emphasise once again that the euro exchange rate was not a policy target and declined to state a specific level that would trigger further stimulus. However, Draghi said the strength of the single currency had reduced Eurozone inflation by between 0.4 and 0.5%.

The Euro is somewhat lower this morning (circa 50bps) but given it had one of its best week’s last week, rising 1.31% on a trade weighted basis Draghi is only achieving a slowdown in the rate of increase. He is going to have to replace talk with action soon.

The difference between “core ex food and energy” and the producer price inflation is relatively small at the moment. This implies little pass through from recent moves higher in commodity prices. But consider the chart below. We have had higher food price inflation in recent weeks. This should lead to a higher PPI headline number. 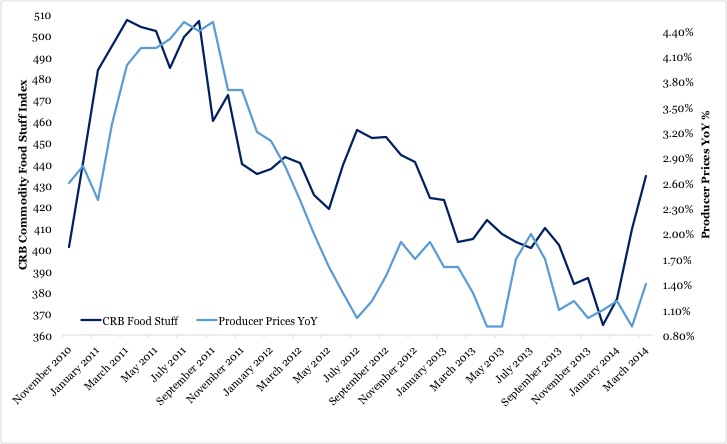