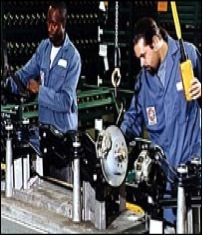 It is so refreshing to hear Janet Yellen. After years of listening to US Baby Boomers, who run the show, agonising about their pensions, their 401 k’s and how their retirement will be financed, here is someone in power who is more concerned about the chances of young people getting jobs than the chances of older people playing golf.

Given that she is by far and away the most powerful woman in the world, getting a handle on what makes Mrs. Yellen tick is an important assessment to try to make.

For months, I have been arguing that she is much less concerned about Flash Boys and more worried about Average Joes. In short, she is more Bruce Springsteen than Gwyneth Paltrow. This comes from her own personal view of the world and the tradition she has been brought up in. (See here). Last night she nailed her colours to the mast saying there was still lots of jobs to be created in the US before she’d contemplate raising rates.

The markets reacted predictably. US equities rallied and Treasury yields fell yesterday following Yellen’s statement that there is still “considerable slack” in the labour market (see below). Equities have had a strong end of the month, especially the previously unloved emerging markets which continue to trade very well.

Emerging market equities are up 3.9% in March while SPX is only up 0.65% and NASDAQ was down 2.5%. Almost all sectors were up yesterday with healthcare +1.3% leading the way on the final day of Obamacare enrolment.

“Fed policy works through financial markets, but it is aimed at Main Street, not Wall Street”- Janet Yellen

In her keynote speech at the National Interagency Community Reinvestment Conference, Janet Yellen took the opportunity to stress her view that slack in the labour market remains considerable. The speech could be summed up by “jobs, jobs, jobs”.

She sent a reminder to markets that, when discussing her own opinion, she remains very much on the dovish side of this argument.

Yellen’s remarks largely consisted of a summary of reasons why, in her view, there are still loads of people out there who want a job but can’t find one yet. So the problem is demand. She backed up her arguments with the following points.

Now let’s stand back and see what all this signifies.

Unlike US monetary policy itself, the language, used by many economists to describe policy, is highly restrictive. You can only be “dovish” or “hawkish”. But there is more nuance in the real world. Mrs. Yellen is neither of the above birds. She is a realistic economist who is concerned about poor people, not rich people.

The fixed income markets took the news in its stride with only some mild steepening of the US curve as some of the more aggressive short term rate bets were paired back. See the chart below for where we currently stand in terms of rate expectations.