Grand Canal Dock and a story of manic speculation 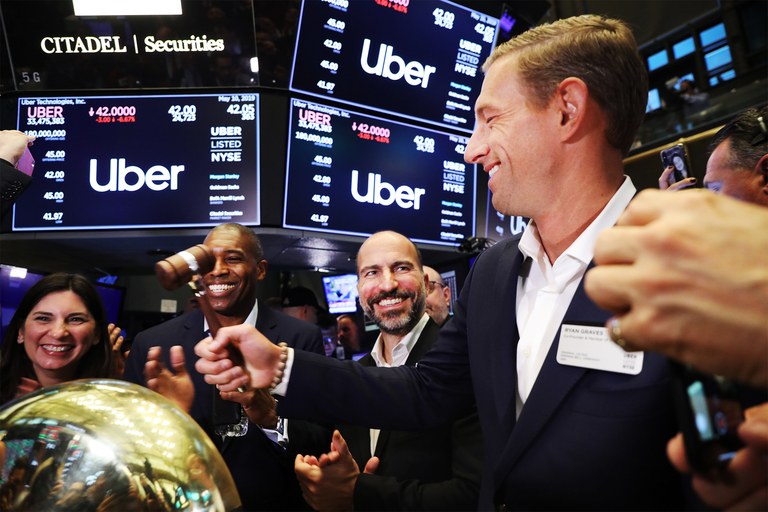 Last week Uber, the taxi-sharing app, floated on the New York stock exchange. As a result the company is now worth just over $65 billion.

We are entering the 11th year of a bull market, and because success tends to breed a disregard for the possibility of failure, investors expressed “disappointment” at the shares’ performance in the first few days of trading.

Does this tell us where we might be in the global economic and financial cycle? Tech insiders are said to be “disappointed” at this valuation of more than $60 billion for a taxi firm with precious few assets, that has no immediate prospect of making a profit, and burns through $2 billion of shareholders’ money a year.

Think about this for a minute: a company that loses money, has no real prospect of profits, and spends shareholders’ money in an extraordinarily cavalier way has a higher value than thousands of solid companies that have been making more money for decades.

Maybe it is very 20th century of me, but surely profit is what shareholders should be concerned about? Is this the essence of financial mania?

Coincidentally, I was considering this mania for tech and so-called tech stocks as the Dart was delayed at Grand Canal Dock in Dublin one morning.

Grand Canal Dock is positioned at the mouth of the Grand Canal, the result of a mania for canals in the late 18th century, and the Dart is the descendent of the first railway built in Ireland, itself the result of a speculative mania for railways in the mid-19th century.

In both episodes great fortunes were made and lost in speculation on the shares of companies that didn’t make profits but augured riches betting on the new technologies of the times, burning through shareholders’ funds to get to the promised land.

It seems that speculative mania is part of human nature, and exciting new technologies have a way of bringing out our manic speculative side.

Joseph Schumpeter, a great Austrian economist, believed that the capitalist economy was “in the perennial gale of creative destruction” where industries and ways of doing things were constantly swept away by new technologies.

Innovation, therefore, is the key to capitalism. It is the outstanding fact of economic history. And where innovation drives the economy, the speculator is rarely far behind.

When the innovation becomes more established and begins to generate a steady return, the speculator is overtaken by the investor, who wants a stream of income more than a quick capital gain.

In essence, the investor is concerned with the present, with stability and with a regular flow of income, while the speculator is driven by the future and the promise of one-off riches or hitting the jackpot. Novelties and inventions have always tickled the speculator.

In the late 18th century, Britain and Ireland went through a canal mania. Canals were the future as they promised to link cities and countryside together.

In the more distant past natural rivers had the power to dictate to contours of the economy. Large parts of the country could be connected like never before, opening up opportunities for trade and linking inland cities and agricultural heartlands with the ports for exports and imports.

Between 1770 and 1800 more than 1,000 miles of canals were built. Initially shares in canal companies soared, huge profits were made, and far-reaching claims about the social impact of canals were suggested, indicating that canals would dramatically alter the social fabric, liberating people to mix and travel cheaply to places once deemed inaccessible.

In the 1790s, the speculation reached mania proportion. Fifty new canals were initiated, and informal meetings of canal speculators, known as “navigational offices”, sprang up all over Dublin as well as many cities in England. The term “Irish Navvies” – so long associated with Irish workers in England – came from the name for the Irish migrants who dug the canals in England.

The canal mania came to an abrupt end in 1793 following the recession after the shock of the French revolution and the Terror. Canal shares collapsed.

The Grand Canal linking Ringsend, Dublin, to the Shannon was not completed until 1804, bringing ruin to many speculators who never saw a return on their investment.

The “gale of creative destruction” is relentless, and the logic of canals was blown away by the arrival of steam railways in the late 1820s. Again the speculators had a ball; the shiny new technology attracted them once more.

This time railway shares soared. The Dublin-Kingstown line, essentially the first Dart, was completed in 1834, financed by shares issued to speculators.

There was a wobble in the market in the late 1830s when interest rates rose, but in the 1840s, while the famine raged in the west of Ireland, the monied classes of not just Dublin but all of Ireland immersed themselves in an extraordinary bout of railway share mania.

Enormous amounts of money were speculated on the promise of riches, debts were incurred and – like the property bubble here not so long ago – massive debts built up. All the while low interests rate encouraged speculation.

When the crash came, following the revolutionary year of 1848, the speculators, who misdiagnosed speculation with investment, were destroyed. A few years later the body of Irish Liberal MP John Sadlier was found on Hampstead Heath, London, dead by his own hand. He and his associates based in Tipperary and Carlow had been up to their necks in railway speculation. He personally owed Bank of Ireland £400,000.

Both the canal and railway manias led to ridiculously overvalued companies, whose subsequent crash brought financial ruin to many. And yet these technologies did change the world, eventually.

The likes of Uber may well change the world by disruption in an act of Schumpterian creative destruction. But that doesn’t mean that the rewards will go to Uber or its shareholders.

In fact last week’s flotation is aimed at giving the impression that ownership of the company has moved from the early speculator to the more cautious investor. However, given that it hasn’t any profits yet, that might be premature.

As the Dart resumes its journey south, on a route laid down in the first railway mania, we pass the Grand Canal’s original grain stores, soon to be gyms for tech employees.

The lessons of history for Uber reverberate.