Hairdressers, plumbers and electricians part of ‘artisanisation’ of workforce 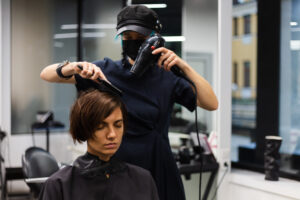 The hairdresser is at her wits’ end. She’s never been so busy but can’t get staff for love nor money. The latest job interviewee’s demands are a sign of the times. A potential colourist named her price: two days a week only in the salon; only working every other Saturday; paid daily in cash. There is a general shortage of qualified hairdressers – experienced stylists, who may have visited some people’s homes during lockdowns, can make more cash working in a client’s front room. The clients like the privacy too. For these mobile workers their phone is their salon, booking back-to-back appointments, charging full whack. Everything is cash. Why would you work for someone else, when you can do it yourself, make more, work when you want, juggle childcare with neighbours and granny rather than a creche?

Across the entire country, the pandemic has changed the way we work. More and more people are eschewing working for a firm or a salon, choosing instead to do it themselves. Small businesses, particularly in the service sector, are suffering from an acute lack of staff. It is not that former employees are not working; they are working differently. Economists, particularly in the US, are worrying that people are not making themselves available for work, suggesting that millions of Americans are opting out of the labour force. It seems to me more likely that they are applying the lessons they learned in the pandemic and doing their own thing.

We are experiencing the “artisanisation” of the work force. People are regarding themselves, like the new breed of hairdressers, as self-employed, independent contractors, who sell their wares openly in the competitive market, without needing the security of a wage. They are more like old-fashioned butchers, bakers and candlestick makers or artisans than 20th-century workers. Technology makes this possible as their phone is their shopfront and network. Why pay exorbitant rent and rates on the main street when you can have your client-list on WhatsApp, chose your own hours and the rate of income tax you are compelled to pay?

As people step out of the traditional employment market, bottlenecks abound. For example, the chaos at the airport, which is partly the result of poor management and supply constraints. There are not enough workers to meet the massive demand for air travel. The airport is experiencing the same problems, in macro form, that the salon owner experiences in micro form. We are seeing this all over the economy. Pent-up, post-pandemic demand for all the things we couldn’t do for two years is slamming into the new reality of thousands of people – often the same people – changing how they choose to work.

The latest Labour Force Survey shows there are more people working in Ireland than at any time in this State’s history. Over 2.5 million people are working in the country, that’s 300,000 more than at the beginning of the pandemic. In only the past year, the rate of employment in the bulk of the working population, aged 15-64, has increased sharply from 65.6 per cent to 72.8 per cent. These are extraordinary figures for a country that was once blighted by persistent unemployment. Joblessness is a thing of the past and some people who are not working don’t want to. Of course, others cannot work or suffer from a lack of opportunity. We are seeing similar trends in the US where 4.4 million workers quit their job (a sign of confidence in the labour market) in April. On an annual basis, there were 78 million new hires and 71.6 million redundancies, a net employment gain of 6.4 million.

All this demand means wages are rising and will continue to do so. At its core, inflation is about pricing power. If one part of the economy has the market power to name their price, it will do so. The inflation that we are experiencing and will continue to experience is the result of new-found pricing power of workers. Workers are in demand and there aren’t enough out there, and therefore wages will rise. This week, a letter published by the Central Bank suggests the majority of Irish households expect inflation to persist at a rate of 10 per cent over the coming year, but half think their salary will remain unchanged, and any wage increases will be outpaced by inflation. All this means that living standards are going to fall, near-term, as incomes are eroded by inflation. Falling living standards don’t last long without a scrap.

We are heading into a new period of industrial strife. Workers will want wages to compensate for inflation and employers, working with fixed-margin business models, will try to hold out, claiming they can’t make any profits faced with these higher wage costs. Public sector workers will agitate first, because they are on fixed incomes, putting them on a collision course with the Coalition which will be moving into electoral mode. It is important to remind ourselves that these problems we face are problems associated with success. Surging demand and faltering supply are the result of too much, not too little, money – as are queues at the airport.

In the meantime, the new, self-employed, artisan class living out in the suburbs – hairdressers, plumbers and electricians – will be looking after themselves, fixing their prices, dictating their hours and setting their own agenda, because they can. The spoils of the economy always go to those with most pricing power and, while some people’s incomes are falling, we are witnessing the emergence of a new cohort who are masters of their own post-pandemic destiny.