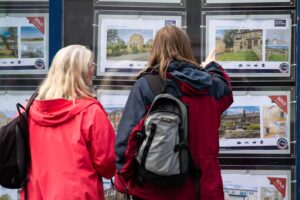 The long era of zero interest rates is coming to an end with ferociousness. It seems appropriate to be writing this in New York, and not just from anywhere in New York but from one of those Manhattan hotels with impossibly lithe, tattooed bar tenders, serving expensive Peruvian ceviche and Austrian Spätburgunder at hyperinflationary prices. Places like these are products of a generation of zero interest rates.

People’s phones are buzzing not so much with news that the Democrats fared better than expected but news of a crypto-prince brought down to earth. This week, it’s yet another person who goes by his initials. SBF is Sam Bankman-Fried, the young man who was entertaining Tony Blair, Bill Clinton and Gisele Bündchen at his crypto shindig in the Caribbean earlier this year. His crypto exchange, FTX, was valued at $32 billion in January; it is gone, as is all the money. The exchange – where people bought and sold crypto assets – suffered an old fashioned bank run as the crypto community panicked in the face of higher interest rates. When interest rates are zero, assets are propelled skywards only to crash when interest rates head upwards. Crypto is an amplified version of that truism. The so-called crypto winter has turned into an crypto ice age.

Something similar is happening in tech stocks (as noted here a few weeks back). Companies that were valued at extremely high levels, are now having to come to terms with a world where profits and costs count again. This means lay-offs and a sharp focus on revenue. Most of the tech companies in Ireland are, in truth, advertising platforms. Advertising revenue is down because consumers are nervous about spending. Companies are trying to second guess how deep the coming recession might be. Amid the nervousness, the first thing to be cut is the advertising budget. And this hits the tech/ad companies like Meta and Google hard. The new reality means that lots of the spending and hiring of the past few years looks unwarranted.

While tech companies are having to readjust, crypto is a different matter. Don’t be too surprised if the last crypto currency still standing, Bitcoin, falls more aggressively from here. No one has a crystal ball but it is clear that people’s tolerance for stories about a brave new world with new money has waned precisely because central banks are raising interest rates to protect old money. A major claim from the likes of Bitcoin was that these new assets were a hedge against inflation. As inflation rose, Bitcoin fell; as the Americans say, “go figure”.

Planet Crypto must deal with a world where real power lies with old school central banks. One lasting legacy of this latest debacle will be more central bank regulation because the collapse of a large crypto exchange reveals that even one of the world’s leading crypto marketplaces was not strong enough to meet the demands of depositors who wanted their savings back. That’s not the sort of financial world anyone wants to live in. I suspect crypto will enter the “embarrassment” phase of the investment cycle where people will pretend they were never involved in crypto in order to be taken seriously by others in the future.

As is the case with all episodes of financial booms and busts, we can expect to enter the next phase when great swindles, scams and crimes will be exposed and no amount of tech-bro talk in Bermuda shorts will disguise the fact that innocent people’s money was taken in some cases by unscrupulous grifters. Away from Planet Crypto, the real world is groaning as interest rates rise. All assets – particularly housing – are highly likely to fall from here. If you were a betting person, you might start looking for bargains in stocks – but housing is a different story.

Property moves much slower than finance but the iron law of money always reasserts itself. When interest rates rise, prices fall. Simple. We can look at interest rates as the way we assess lending to the future. We lend from today’s certain world to tomorrow’s uncertain world and because tomorrow is always unknowable, lenders must be given some payment to lend to the future, otherwise they would hoard. This payment is the rate of interest. If the rates are too high, there are numerous obstacles put in the way of lending and good ideas won’t be financed. In contrast, if rates are too low, there are maybe too few obstacles, and lending will gush into all sorts of hare-brained projects. As most projects fail, periods of very low rates will, as an arithmetic fact, lead to huge bankruptcies.

The rate of bankruptcy will be directly proportional to the interest rate at which most of the lending was carried out, the new prevailing rate and the absolute amount of money borrowed. Irish property and the commercial property market in particular is not immune to these obvious observations. All assets are interlinked in a process called the credit cycle. When the world is confident, everything rises, and the corollary is also the case. People panic on the way up, paying too much for assets, but they also panic on the way down, offloading too much.

Have you noticed an increase in the number of houses for sale in your area? Six months ago, there was almost nothing on the market. Buyers had to clamber over each other, as supply was withheld. Today, “for sale” signs are sprouting up all over the place, which means estate agents are beginning to panic. Properties they were holding back in the expectation of higher prices are now being put on the market with the hope they will grab those higher prices, before they fall. The market is swinging as a buyers’ panic leads to a sellers’ panic.