How has Biden’s grip on power become so fragile? 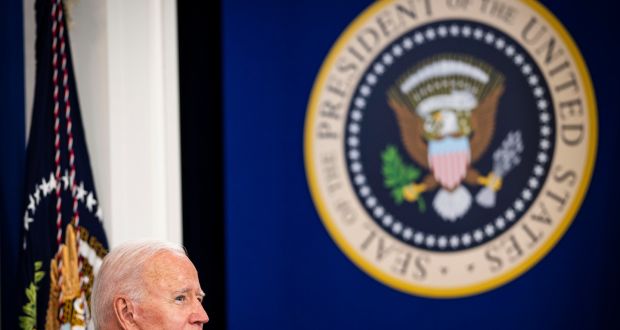 Democracy is a funny thing. In the US, we end 2021 with one holdout senator, from one of the poorest states in the union, a place that desperately needs better social services, voting against the biggest expansion of public services the US has ever seen.

Senator Joe Manchin from West Virginia, whose vote is critical to Joe Biden, has torpedoed the president’s Build Back Better Bill. By refusing to put his signature to the White House’s $1.75 trillion social-spending Bill, Manchin, a conservative Democrat, out of step with the rest of the party, has delivered a severe blow to the presidency. Even Biden’s legendary back-room capabilities, his ability to stitch up deals and forge alliances, wasn’t enough to get this Bill over the line.

Could we be talking the effective end of the Biden presidency already? To answer this question, it’s necessary to divide it into two parts: the practical part and the emotional part.

In practical terms, the margin between success and failure is so wafer thin that any Democratic losses in next year’s mid-terms (not unlikely) will leave the president entrapped in the White House without essential levers to push through his transforming of America agenda.

Let’s leave that analysis for the political heads who know the territory better, but a combination of more Covid restrictions and the Fed signalling three interest rate hikes in 2022 at least must give the Republicans hope that they can make hay in the coming year. The president might still be able to get a deal with the errant senator, but the political difficulties can’t be overstated.

Maybe the more fascinating angle is what happens if a presidency comes unstuck. It started with such hope; and not Obama’s version of “hopey/changey/feel good” stuff, but a more grounded, gritty Biden promise to get things done.

What does it say about the ability of the US political system to deliver meaningful governance? How could a democratically elected president find his grip on power to be so fragile, barely one year after his predecessor encouraged a coup d’etat?

And, critically, if the US can’t execute a significant spending package now, in the face of a pandemic, with the country characterised by greater inequality than ever before, when can it do it?

The figures from the US are shameful for the richest country in the world. The median household income was $67,521 in 2020, a 2.9 per cent decline from the previous year. Meanwhile, the official poverty rate stood at 11.4 per cent in 2020, up 1 per cent from 2019 and marking the first increase in the poverty rate in five years.

This means about 37.2 million Americans are living day to day in poverty. Poverty is much more pronounced among both black (19.5 per cent) and Latino (17.5 per cent) communities relative to their white (8.2 per cent) and Asian counterparts (8.1 per cent).

As the American economic commentator Noah Smith highlights in his Substack column this week, 21 per cent of American children are living in poverty, compared with 8.3 per cent in Ireland.

He notes that at one time, Irish people flooded to the US to escape poverty and Jonathan Swift’s “modest proposal” suggested selling Irish children for food; yet today, America’s child-poverty rate is close to three times that of Ireland’s.

About 30 per cent of the population – or 93.6 million – live “close to poverty”, with incomes less than two times that of their poverty thresholds. The US department of agriculture estimated in 2020 that 10.5 per cent of US households – 13.8 million households – were food insecure, having difficulty providing enough food for the household.

While there may be about 37 million Americans in poverty, the country hosts 724 billionaires. Indeed, the $17 billion fortune amassed by Jeff Bezos, America’s wealthiest man, is 14 million times greater than the federal poverty level for an individual American.

Interestingly, the three states with the highest incidence of poverty – Mississippi (20 per cent), Louisiana (19 per cent), and West Virginia (18 per cent) – all voted Republican in the last presidential election, because somehow, over the past five decades, various politicians and ideologues have convinced the poorest people in America to vote for policies that will enrich that country’s richest people.

We have the bizarre situation where a senator representing some of America’s poorest constituents is voting against a plan to directly help poor people today because it might increase taxes on rich people tomorrow.

In ideological terms, it feels like this presidency has been mugged by 1995. By this I mean that the reasons Manchin gave for voting against Biden’s Build Back Better were straight out of the Bill Clinton playbook. He spoke about a growing national debt and future taxes on working people, even though Biden’s plan involves taxing only the very rich.

Manchin sounded like Bill Clinton of the mid-1990s. Back then, Clinton’s macroeconomic strategy revolved around a deal with the bond market. Clinton undertook to keep the US national debt under control.

If he was seen to spend too much money, the so-called bond vigilantes of Wall Street threatened to sell US treasuries, driving up interest rates and driving down the growth rates that Clinton so needed for re-election. In essence, the president was asking Wall Street for permission to govern.

We had assumed that this thinking was a thing of the past. The first few months of the Biden presidency saw the Fed and the central government working in tandem, opening the spigots with the Fed essentially saying to the treasury: “Just give us the invoice and we will pay for everything.”

This is still very much the case. While the Fed has signalled increasing rates modestly in the face of a surge in inflation, it is still squarely behind the White House in terms of the broad thrust of policy.

You also get the feeling that the older heads at the top, Janet Yellen, Jay Powell and Biden himself, appreciate how close American liberal democracy came to a catastrophe with Trump and there is an unwritten code between them to fix America to save it from itself. The feared bond market is not particularly fazed by anything – unless you characterise 10-year interest rates at below 1.5 per cent fazed.

The problem for America is that while its president may have a transformational vision, its politicians or, at least, the Clintonite conservative Democrats, have not broken free of the intellectual trap set for them by Ronald Reagan. It’s a far cry from 1964, when President Lyndon Johnson declared war on poverty with the words: “The richest nation on Earth can afford to win it. We cannot afford to lose it.”

America is still at war – with itself.