If Finland can eliminate homelessness, so can we 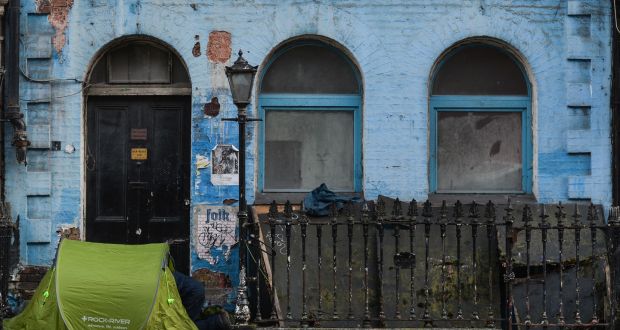 When describing social and behavioural change, probably the finest, and certainly most thoughtful, Irish economist of his generation, Eric Lonergan, speaks of a concept called “extreme positive incentives for change”, or Epic for short. The nub of the idea is if we want to change something, we need to put in place extreme, not modest, incentives for people to change their behaviour. Lonergan argues, with ample evidence of success, that this works across a variety of areas, from adoption and pricing of solar power in Japan to the take up of electric vehicles in China and Scandinavia.

The notion rests on two simple observations about human behaviour. The first is that we respond far better to positive incentives than negative ones. Anyone who has ever managed a team of people will know that encouragement is far more motivational than punishment. The second plank of Epic, which Lonergan outlines with Corinne Sawers in a forthcoming book, Supercharge Me, is that when it comes to incentives we are far more motivated by really big incentives, than moderate ones. For example, if people are going to change their behaviour, they are much more likely to do so if the incentive is a 40 per cent price saving, rather than a 4 per cent one.

Walking through Dublin the other day, seeing the number of homeless people huddled in doorways, against the backdrop of an extraordinary number of derelict buildings, Lonergan’s idea of Epic elbowed its way into my head. Could we eradicate homelessness by renovating derelict buildings in our cities and turning them into homes? Homelessness can be eliminated. Finland has done it. In 2008, the Finns decided that they would not tolerate their fellow citizens, someone’s brother, sister, son or daughter, sleeping in doorways.

Over the past 10 years, 4,600 homes have been provided for previously homeless people in Finland. Interestingly, the Finns concluded that the old way of dealing with homeless drug addicts which demanded that the addicts get clean first, was not working. Instead, they provided homes without preconditions, working on the basis that most addicts are trapped in homelessness; without an address they can’t get a job and without a job they can’t find a home. It turns out that the motivational force that is having your own place, assists enormously with getting clean and turning your life around. (I’ve been close to several addicts over the years and it seems there isn’t an addict that doesn’t look at themselves in the mirror and hate what they see. They want to change.) Once they have a secure place, the Finns found, the process of recovery is far easier and far more successful. Encouragement beats punishment.

So how did Finland finance this?

Finland’s policy is called Housing First. NGOs work with the homeless and builders, financed by a variety of sources. In the past decade, €270 million has been spent on the construction, purchase and renovation of housing as part of the Housing First programme. But this is far less than the cost of homelessness in terms of the costs of healthcare, policing, the courts service, ongoing welfare payments and so on. The Finns estimate that today the State spends €15,000 less per year per homeless person than previously. It works in the following way: the NGO (something like the Peter McVerry Trust here) gets discounted loans from the State and NGOs’ income comes from the Finnish state lottery. The rent that these formerly homeless people pay, after securing a job – which most of them do – also contributes to finances. Such a model could be replicated in Ireland in a systemic way and vacant properties could be targeted to be brought back to use.

The problem in Ireland is of a similar magnitude to the original Finnish problem.

There are 6,317 homeless adults nationwide, 70 per cent of whom are in Dublin and are mainly male with sizeable clusters of homelessness in Cork (440 ), Galway (254) and Limerick (231). There was also a total of 1,082 homeless families at the end of last month too, comprising some 1,752 adults and 2,513 accompanying children.

There were 183,000 vacant properties on the night of the last census (excluding holiday homes). A total of 10,056 were categorized as “vacant long term” with a further 1,544 classified as “boarded up, habitable”. Within Dublin city and suburbs alone, these two categories account for around 1,549 properties. A recent study from UK comparison website money.co.uk suggested that Ireland’s 9.1 per cent vacancy rate is the 10th highest globally. Therefore we have the buildings there to be renovated. Would it be possible to match these two issues, by initially identifying housing NGOs to fund and then putting them together with builders, architects and town planners to identify possible refurbishment opportunities?

Building requirements A report by Anois suggests that 72 per cent of derelict properties could be brought back into use while easily adhering to new building requirements. Here’s where Lonergan’s Epic idea also kicks in. To bring these buildings back to use, we could reintroduce big capital allowances to motivate small investors to commit capital to refurbishments. Imagine a 100 per cent capital allowance for refurbishment of derelict buildings, meaning if you spent €200,000 on a refurbished apartment in a derelict building, you would be able to claim it all back in income tax over say 10 years. Who wouldn’t commit to a mortgage in such circumstances with such a tax break?

These type of schemes worked exceptionally well in the urban renewal initiatives of the 1990s, when a significant amount of Dublin’s dilapidated squares and quays were redeveloped. Mistakes were made, no doubt, but knowing them now, means we can fix them. When it comes to financing the NGOs (who would in this new regime be in competition with everyone else to avail of the tax incentives), a bit of financial engineering, using low interest rates could work well. Acquisition of the buildings would be executed not by a compulsory purchase order – which obliges the State to buy the property – but by a compulsory sale order, which demands that the building is sold to whoever wants it.

This is much quicker and gets rid of a layer of bureaucracy. The NGO will need a stream of income to cover the interest payments on the loans it will have secured to buy and refurbish these properties. The State could raise a small bond at 2 per cent for 30 years. This money could be transferred to the NGOs to cover interest payments.

The building work, the main expense, would be aided by a capital allowance and ultimately it would be the State giving a tax break to itself. In this way, everyone wins: dereliction would be tackled, and refurbishments made affordable. When you initiate economic activity where there was none before, everyone benefits and in the fragile homeless NGO sector which is now competing with everyone else for the capital allowance to help fund expensive refurbishment, one arm of the State is giving a tax break to another arm of the State. Therefore, it is nothing more than a balance sheet adjustment. And many thousands of people who have been left by the wayside, could have a life affirming possibility of transformation.

That’s surely something worth trying.