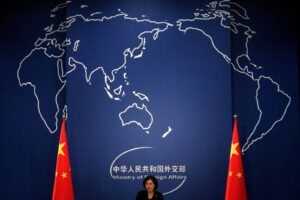 Ireland is one of the few countries in the world that runs a trade surplus with China. In 2021, total exports to China stood at €11.89 billion, a nearly 8 per cent increase from 2020. Total imports from China in 2021: €8.4 billion. Exports from Ireland to China over the past 25 years have increased at an annualised rate of 22.9 per cent (from €67.9 million in 1995 to €11.9 billion in 2020). Today, a trade surplus of close to €3 billion with the world’s number one industrial power is not only unusual but also reveals how much Ireland has to lose directly – not to mention indirectly – if tensions over Taiwan heighten.

In terms of the likely playbook, the West has shown its strategic hand in Ukraine. If China were to take Taiwan, and that has been a stated Chinese policy objective for many years, it’s likely that the West’s response would be a mirror image of the Russian playbook: sanctions allied with direct military support for Taiwan. The key difference is size. China’s 2021 gross domestic product was 10 times larger than Russia’s. China’s banks have more than 30 times as many assets as Russian banks. There is six times more western foreign direct and portfolio investment in China than in Russia. China is the world’s top trading economy and number one exporter of manufactured goods by a long way. It is still vulnerable to US financial sanctions as it is still completely reliant on the US dollar for most of its international financing.

In practical terms, it would be more difficult to supply arms to Taiwan than it has been for Ukraine. In addition, sanctions on China would prove costly for the US as well as China itself. According to a Rand Corporation report entitled, aptly, Thinking the Unthinkable, a war with China would slash US GDP by 5-10 per cent and China’s by 25-35 per cent. Global trade would come to a shuddering halt. Consider the global impact of neutering the Taiwanese economy. This extraordinary economic powerhouse, via one company, the Taiwan Semiconductor Manufacturing Company, makes 92 per cent of the advanced semiconductors necessary for every smartphone, laptop and ballistic missile in the world. Bilateral trade between China and Taiwan was $328.3 billion last year. Any conflict means that critical tech supply chains would be disrupted, affecting smartphones, computers, automobiles and other key components of the digital economy. If China were to gain control over Taiwan’s semiconductors, it would aid China’s bid for global digital supremacy.

The financial ramifications of a global trade war with China dwarf anything that has played out thus far with Russia and the consequence of sanctions on Russia have been profoundly dislocating across the world economy, in a swathe of areas from petrol pumps to bread prices. Yet it could happen. Critically, the West would be facing a new Axis-type alliance in a world where all the old assumptions have been turned on their head in this dramatic year of 2022. A tacit alliance between Russia and China is the stuff of geostrategic nightmares for America and Europe.

It’s worth remembering that the last time the West faced conflict simultaneously on the European and Asian fronts – against Nazi Germany and Imperial Japan – neither Japan nor Germany lifted a finger to directly help each other in battle. Japan even made peace with the Soviet Union precisely when the Nazis were bogged down in Russia. That said, simply being in an alliance was sufficient to split the resources of the Americans between the Pacific and Atlantic fronts. In terms of history, we might also consider that the 1980s Chinese borrowed from the 1860s Japanese Mejia Restoration example when it re-industrialised. In the 1860s, when China was being humiliated by European colonialists, Tokyo concluded that Japan would be next. The threat to Japan would come from both the Europeans and those proto-Europeans, the Americans, in the Pacific. Imperial China of the 1850s and 1860s was simply too weak to withstand European powers. Japan took note and completely reinvented itself economically in the period known as the Mejia Restoration. The result was an economic and political transformation, announced by Japan’s military trouncing of Russia in the 1905 Sino-Russian war.

Forty years ago, terrified by their own frailty as they came blinking out of four decades of communist isolation, the authorities in Beijing followed the Japanese playbook, culminating now with China feeling strong enough to take on America over Taiwan.

Interestingly today for America, Japan is at the forefront of their anxieties. If China were to occupy Taiwan, both Japan and South Korea would feel extremely exposed and vulnerable. Like central European countries that feel Ukraine is only the start of Putin’s ambitions, strategists look at Taiwan as an essential link in America’s Asian strategy, of which the alliances with South Korea and in particular Japan are central. As such, Taiwan is the Donbas. Symbolically, Taiwan has evolved into a democracy, a vibrant one with lots of political, cultural and media dissent. Like Korea and Japan, it is an economic success story, the sort of place America should be standing up for, but the Chinese calculation must be that the costs to the US and the world are simply too high for Washington to entertain. Taking the long view, Beijing must think that disciplined Chinese people can wear the economic privations for longer than the weaker western electorate.

Even in the short-term, sabre-rattling is all upside for Beijing. Nancy Pelosi’s visit gives Xi Jinping an opportunity to divert attention from his own failures: the zero-Covid strategy which can’t work; the huge real estate bubble which is deflating; and the associated explosion in government debt. For Joe Biden, it’s just another headache no matter which way you look at it. It is an unwinnable situation for the US president facing mid-term elections in a few months. For the rest of the world, it’s difficult to see how the issue of Taiwan is going to be settled. In this new cold war, the Chinese won’t tolerate a greater US presence in Taiwan any more than the Americans could stomach the Soviet presence in Cuba. Keeping the lid on things might be the best we can hope for and, meanwhile, somewhere deep in Russia, one man is smiling. Things are going to plan for Vladimir Putin.