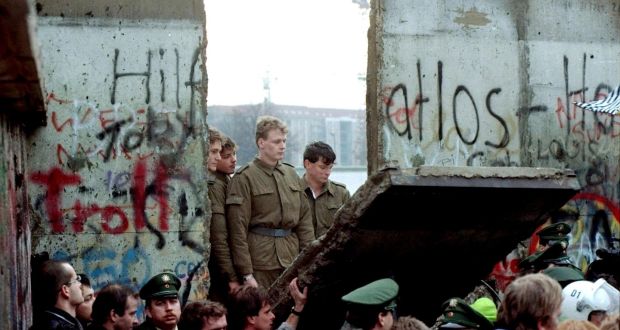 Thirty years ago today the Berlin Wall fell. At the time it was widely thought that the main economic beneficiaries of the collapse of communism would be the former Soviet satellite states of eastern Europe, suddenly liberated from the stultifying grip of Marxism-Leninism.

This was particularly the case for countries such as Czechoslovakia and Hungary, which had impressive manufacturing bases before the second World War. The theory at the time was that educated and technically able communist workforces would embrace capitalism, attracting western investment due to relatively low wages, thus propelling those countries upwards.

However, the country that benefited most from the end of the cold war was one that had been neutral, poor and peripheral to the major conflict of the 20th century. That country was Ireland.

Since 1989 no European country’s economy has grown more quickly than Ireland’s. No other European country has seen its living standards rise so dramatically and its population rise so significantly. No European economy has experienced such a total transformation of its industrial base.

If there was a European peace dividend, it went to Ireland. This is the law of unintended consequences in action. As we mark this significant anniversary, it’s worth teasing out how sometimes in economics the strangest things happen.

On November 9th, 1989, no one was thinking of Ireland, but a chain of events triggered that day would have profound ramifications for us.

In Brussels the EU reacted to events in Berlin by accelerating the internal market, completed in 1992, and also the euro, agreed in 1994 and introduced in 1999. Both developments were designed to strengthen Europe by tying the new Germany strategically to the EU.

These moves in turn prompted US corporations to find a bridgehead into a new, expanded Europe. Conventional wisdom suggested they would set up in central Europe, close to the larger markets. But they didn’t. Culture and taxes trumped proximity and legacy, and many of them chose Ireland.

In 1989, US foreign direct investment into Ireland was $192 million; by 2017, that investment – most of it from the US – was $744 billion, the highest in the world as a percentage of population or income.

According to the IDA, Intel established operations in Ireland in 1989, and we now host one of the firm’s largest manufacturing facilities outside the US, directly employing 4,500 people between Leixlip, Shannon and Cork.

Boston Scientific set up in Ireland in 1994, and today employs around 5,500 people across three sites in Galway, Cork and Clonmel. Pharma giant Pfizer employs 3,700 people in its Irish facilities and contributes €2 billion annually to the economy.

This capital-intensive US manufacturing investment changed our industrial base by creating tens of thousands of well-paying jobs and dramatically upgraded Ireland’s industrial base. It also changed our politics by underwriting a new middle class.

American research institute Pew has found that out of 11 western European countries, Ireland experienced the most rapid increase in income from 1990 to 2014 and the biggest increase in its middle class. While the middle classes of Germany, Italy, Spain and Finland have shrunk since 1990, Ireland’s has expanded dramatically.

The forward motion into the broad middle is measured by the proportion of people with incomes between two-thirds and double the national median. In Ireland it is close to 70 per cent of the population.

Contrast this experience with much of Europe, where the end of the Berlin Wall coincided with competition from China that shattered the old European industrial base. While the rest of Europe was seeing its industrial base decimated, we were building a completely new US-led one from scratch.

In addition, as we didn’t have an old manufacturing base, we didn’t suffer the dramatic China shock that was experienced by the working classes of countries with uncompetitive industries, such as Italy. As a result, rising Irish living standards and more employment opportunities led to an expanding middle class at a time when the middle class was being squeezed in Europe.

The political implications are playing out now.

As we enter the third decade of the 21st century, Europe – from Liverpool to Lublin, Malmo to Milan – is threatened by populist, proto-nationalist political movements. Ireland, on the other hand, is not. We are a political outlier.

There is no mainstream populist movement in Ireland. The radical left and radical right have been defeated in elections by the radical centre. In the EU elections over the summer no extreme or populist candidates were elected in Ireland. The only populist party of note, Solidarity-PBP, claimed just 2.53 per cent of first-preference votes nationally.

On the other side of the political fence, while Peter Casey won 9 per cent of the vote in Midlands-North West, it was nowhere near enough to get elected. In contrast, Britain’s Brexit Party got 23 per cent of the vote and delivered dozens of MEPs. Latest data on French voting intentions for the 2022 French presidential election put Marine Le Pen on 28 per cent, just below Emmanuel Macron’s 30 per cent. Italy is flirting with a right-wing demagogue while, east of the Elbe, populists are in power from Warsaw to Budapest.

In general, populism is the product of a shrinking middle class. When people feel they are losing out, they vote for protection from the “other”.

But when your middle classes are expanding and feel that, despite day-to-day difficulties, they are going forwards, then populism’s attractiveness diminishes. This is what is happening in Ireland.

Interestingly, anti-populism is happening at a time when immigration to the country has never been higher. (There are arguably pockets of anti-immigrant behaviour in towns that are resisting direct provision centres, but it is not a mainstream reaction.)

Indeed, the general immigration story is yet another consequence of the Berlin Wall coming down, because most immigrants to Ireland are people who lived – or whose parents lived – behind the Iron Curtain. Again, Ireland is benefiting from the education system of eastern Europe because we are receiving young people from European countries with high standards of education.

As Ireland got richer, we also became more tolerant – and vice versa. Liberalism and wealth are a mutually reinforcing dynamic. In contrast, intolerance and dogma go hand in hand with economic stagnation. Thus the liberal victory in recent Irish referendums and the live-and-let-live, tolerant centre in politics can be traced back to that night in Potsdamer Platz.

As we mark the 30th anniversary of one of the most momentous political events of the past half-century, it’s important to appreciate just how material those events have been to Ireland’s contemporary experience.