Irish cost of living has little to do with Putin, and everything to do with land 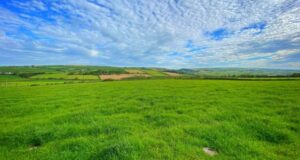 We can all see the cost of living is rising, but how can we tackle it? To answer this, it is important to understand how the global economy is functioning and how global supply chains and capital flows will be profoundly altered by the new world network of alliances brought about by the war in Ukraine.

For Ireland, a small cog in the global supply chain, any disruptions to the way the world operates – economically, politically and financially – have enormous ramifications. Ireland’s income and wealth are determined by being a small player in an open globalised world, under American and European – not Russian or Chinese – hegemony. Has that essential global balance between the power of democratic states and the power of autocratic states shifted? And, if so, what does this mean?

The invasion of Ukraine has changed our world forever. The story of the decline of the US and Europe, dragged down by the effete decadence of the mollycoddled liberal centre, is over. The idea that Europeans were too rich, too fat, too comfortable to care has been shocked into redundancy. Germany has stepped up. Poland, a country until recently characterised by racism and creeping intolerance of all minorities, has opened its doors and, more charitably, its arms. The EU is unified as never before and the various European wannabe autocrats, those pound-shop strongmen and women, are running for cover.

In the US, the liberal centre is back and the State department is in control. The adults have returned and more critically, US intelligence, financial clout and global coalition-building are showing the world where the real economic power still lies. Soon China will be encouraged to make a choice as to which side it is on, so too India.

Implacable enemies, India and China have their own individual reasons to turn a blind eye to Putin’s culpability, but it is hard to see how any major country would want to be tethered to the economic husk that is Russia if the price of such a choice is to be frozen out of the global economy. The US and Europe, reinvigorated by the threat from Russia, can point Beijing and Delhi to the increasing emasculation of Moscow’s economic prowess.

For Ireland, the resurgence of the US and Europe is good news. In terms of an economic model, Ireland’s game, like that of any small trading state, is to always be open to talent, money and ideas. Small countries need to overcome the tyranny of size and the restriction of scale by being a home to foreign – as well as local – capital and talent. Now that Putin’s invasion has weaponised global capital, investment from liberal democratic states will go to other liberal democratic states. It will no longer be acceptable for large corporations to deploy their capital in autocratic states, citing shareholder value as a legitimate, driving force. Ireland, along with several other small democratic, largely European countries, will become more attractive for investors, of all hues.

This brings us to inflation or, more specifically, the cost of living here because if we are to benefit from the new world dispensation, we need to get our domestic house in order and the parts of inflation that we can control. First, let’s be realistic about what we can control and what we can’t. The most important aspect to appreciate when talking about inflation in small open economies like Ireland is that the exchange rate is the critical transmission mechanism determining how much outside inflation is imported. Small countries trade a great deal; in Ireland, the combined annual figure of imports and exports is far greater than GDP. If the exchange rate falls, imports become more expensive and general prices rise, almost automatically. As we are in the euro, the exchange rate is out of our control. For most imports we are price takers. The international market determines the price, and we must bear it.

The cost of the war is felt mainly in energy and food. Russia and Ukraine are amongst the world largest exporters of energy and wheat. Both these prices feed off each other. Headline CPI (consumer price index) inflation suggests that prices were on average 5.6 per cent higher in February relative to a year prior and 0.9 per cent higher than January’s levels. This marked the largest annual rise in prices in over two decades. The key drivers of inflation over the past 12 months have been transport (+15.4 per cent), housing and utilities (+12.7 per cent) and alcohol/tobacco (+7.8 per cent). Together housing, water, electricity, gas and other fuels along with transport account for over 70 per cent of the rise in headline inflation. It’s not hard to see how the war, sanctions and counter-sanctions push up the rate of inflation because energy is the foundational input in the economy. Once the price of energy rises, every other price rises.

There is not much we can do about this in the short term. Longer term, harnessing free Irish wind and wave energy is the solution, not just to energy inflation, but also to climate change. It’s a no-brainer and is a transformative opportunity not a cost. However, it is essential not to forget that the most stubborn contributor to the cost of living in Ireland has nothing to do with Putin, Kyiv or sanctions and has everything to do with our political unwillingness to be serious about house and land prices.

The residential property price index compiled by the CSO indicates that prices were up 14.8 per cent in the 12 months to January – with prices in Dublin up 13.6 per cent and those outside of Dublin rising 16 per cent. To put this in context, though prices have risen 115.6 per cent from their trough in early 2013, the national index remains just 3.3 per cent below the peak witnessed in 2007.

Ireland is the least densely populated country in western Europe with amongst the highest land prices. This makes no sense and reflects the artificial inflation of land prices, which enriches landowners and rewards land hoarding. Add to this urban dereliction, itself the result of not encouraging the use of land but encouraging wasteful accumulation not productive application.

Land is the problem in Ireland: we have loads of it but refuse to use it effectively. Land is the foundational price of property. If we were serious about solving housing inflation, we would do everything possible to bring down land prices. The best way to do this is to introduce a site value tax, which, at a strike, would reward land use and penalise hoarding and dereliction.

As we can do nothing about food prices or energy in the short term, we should fix the parts that are in our hands. If Ireland is to take full advantage of the new global economic reality, where capital from liberal democracies will favour locations in other liberal democracies, we must get our house in order. The time is now.