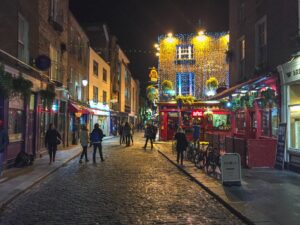 In Ulysses, James Joyce highlights the vibrancy of Dublin’s street life. From first thing in the morning when at 8am on June 16th, 1904, Leopold Bloom leaves his house in Eccles Street — chatting briefly to the public Larry O’Rourke on Dorset Street — Joyce draws a city full of life. People of all sorts come and go, crisscrossing a vivacious metropolitan centre, rammed with activity. Different classes, different genders, young and old, artists, businesspeople, bohemians and bourgeoisie, live and work cheek by jowl at all times of the day and night. Joyce’s Dublin is enthusiastic, effervescent and irreverent, but more than that, it is lived in. Bloom’s city, as traced by his meanderings, is a breathing, evolving organism, as a city should be.

Contrast that Dublin city centre with the spectacle we have today.

Take a stroll down Dublin’s premier shopping streets and you will be presented with dozens of boarded-up retail units. Look up over the ground floor on practically any street and witness the dereliction. Cars bully pedestrians at every turn and at night, much of the place turns into an open vomitorium and, unlike in Bloom’s gloriously mixed Dublin, today pretty much only very rich corporate renters, or the inner-city poor, live within the canals. Middle earners are visitors, not residents, flooding the city at the weekends, before retreating out to the suburbs at closing time.

Things could change. The prize is great and achievable. Creating a walkable, liveable, densely populated city is possible. However, it requires a complete volte-face in the way we regard urban land and property: who uses it, who owns it and who gets to live and work in it. In addition, changing Ireland’s urban centres, not just Dublin, demand an understanding of the post-pandemic reality about the way people live, shop, and spend money and time.

Take the boarded-up retail units on Grafton Street. If landlords can’t find tenants in this prime location, an obvious reason might be that rents are too high relative to the revenue. Revenue is a function of footfall and mark-up, affected by the pandemic and online shopping, which we will return to. But first, let’s look at rents. According to daft.ie a retail lease on Grafton Street would set you back €125,000 per year. You’d be paying €35,000 per year for a shop in Temple Bar, while Wexford Street will cost on the region of €60,000 per year. That’s from the renter side, but what about the landlord? With landlords, the key metric is yield, meaning how much the rental income is as a percentage of your other costs, including the price of the property.

Using a recent report by a commercial property consultancy company called Bannon’s, we can see the various yields in differing types of property in Dublin. In the first quarter of this year 2022, yields remained highest in prime shopping centres at 6 per cent, meaning this is where renters pay most, and on a street like Grafton Street the yield was 4.35 per cent. For a landlord, a yield in the region of 4.35 per cent, together with the capital appreciation expected on a street such as Grafton Street, is a good deal, particularly in a world where interest rates were close to zero for the guts of a decade.

Unfortunately, these yield figures don’t reveal the true balance sheets of many of the owners of Dublin city centre properties, such as large pension funds or other financial institutions. For these types of landlords, yields can be much higher because scale implies their costs are much lower. Also, because they are long-term investors with bundles of prime property — with in some cases a 30-year horizon and in others, longer — they do not constantly have to assess the logic of each property. This implies that such landlords don’t have to react with any urgency to vacant premises and might prefer to sit on a property rather than accept lower rents. The lower the rent, the lower the overall value of the property, and therefore landlords like this might be happy to retain the boarded-up property instead of crystalising a new lower price in their portfolio. The implication for the city is that vacant lots can remain vacant for a long time before the umbilical cord between commercial retail reality, rents and the landlord’s decisions are cut. This could leave large parts of the prime centre city vacant.

For the city, the paradox of aggregation in economics comes into effect. This is where what is good for the individual is not always good for the collective. For the individual landlord keeping the units vacant might be better than cutting the rent. But this means that rents remain artificially high, elbowing out prospective tenants who might want to open shop but need to have rents that are consistent with today’s post-pandemic footfall, not priced to a 2019 world that has gone, maybe forever. We know footfall is down, and a recent KPMG study of Irish consumer behaviour found that “52 per cent believe it is easier to buy products online than in-store” while “one in three Irish consumers say they’re more likely to purchase products online over the next 12 months”. These trends are, perhaps obviously, more pronounced amongst the young.

So what are the chances of Dublin ever returning to the city of Bloom: a rich tapestry of urban life, constantly evolving? Only lower rents can make urban life affordable. This is where a site tax on all sites needs to be implemented immediately. Property is an asset and only property that is used generates economic benefit. Vacancy and dereliction sap economic energy. To penalise vacancy, all sites need to be taxed whether they are used or not. This makes it expensive to leave sites or buildings idle. At a stoke, such a tax would force landlords into generating an income, no matter how small, from their idle property. As property comes back into use, rents will fall across the entire spectrum of property that is vacant. Grafton Street is only the posh end of a blight that afflicts the whole city.

Isn’t it bizarre that the city Irish tourism will celebrate next Thursday on Bloomsday is being destroyed by the very policies the same Irish State is implementing. Joyce’s imperfect, deeply human Dublin, the city that Bloom strolled to avoid going home least he witness his wife Molly in his bed with her lover Blazes Boylan, is practically gone. But with a little vision, and some joined up thinking, it could rise again. One hundred years after the publication of Ulysses, isn’t it about time we started loving Dublin again?