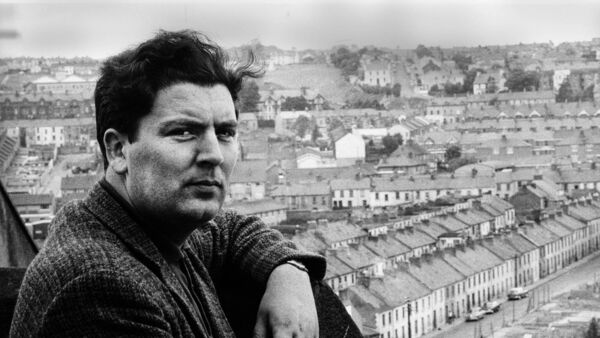 In Mickey Bradley’s book Teenage Kicks: My Life as an Undertone, the bass player reveals that without Derry Credit Union, set up by John Hume in 1960, The Undertones might not have happened.

On June 15th, 1978, The Undertones had blagged their way on to the bill of a battle of the bands in Belfast, hosted by the legendary Terri Hooley of Good Vibrations record shop. Belfast was home to Stiff Little Fingers, whom The Undertones had just seen play in Kelly’s of Portrush. SLF had released the highly charged political single Suspect Device under their own record label and had just signed a new deal with the most happening independent label, Rough Trade. For the Derry boys, Belfast was big time.

The gig booked, the only problem was that Billy Doherty, the drummer and second cousin of singer Fergal Sharkey, had no drums. Derry Credit Union came to the rescue. The band had no drums and little money, but Bradley’s family were credit union members. Bradley, with beautiful understatement, calls the credit union “a community bank for the sort of people who were not likely to be pestered by the banks trying to give them a loan”.

The credit union gave him £400, “wrapped in tenners which were stuffed in the front of my Wrangler jeans to avoid any highwaymen who might be lurking in the Bogside”. Billy Doherty got his drums, apparently the same kit as Blondie’s drummer, and in June 1978 the teenage Undertones were on their way to Belfast, crammed into the back of a white van. The rest is history.

Writing about the credit union in the Derry Journal many years later, Doherty enthused: “Like thousands of people from the town we had the help of a local, dependable financial co-operative that supported the community and I’m so grateful for the wonderful service that Derry Credit Union provided.”

Hume understood this, and one of his (many) lasting legacies is the credit union movement. The Derry branch was the first in the country, and Hume said setting it up was the thing he was most proud of. As Mickey Bradley noted, Derry Credit Union was a “community bank” for a community that the unionist bankers of Northern Ireland ignored.

Hume understood that the Catholic population could not prosper without access to credit. Discrimination in access to finance was part of a pattern that led to discrimination in housing. Hume saw credit as a liberating force that would provide opportunity otherwise denied to nationalists. Critically, it was a peaceful force deployed gently in the face of sectarian provocation.

For Hume, access to credit was part of the broader civil rights movement because he appreciated that economic progress was an iterative, step-by-step process. Communities emerge from poverty not via some big bang moment that changes everything, but rather by a process of trial and error whereby small loans of hundreds – not millions – of pounds/euro/dollars are extended to people who never had credit before.

It is helpful to look at poverty through the prism of time horizons. When you are poor, tomorrow becomes today because money is a constant source of immediate anxiety. People in poverty are not thinking about having enough money for tomorrow; they are worried about having enough today. Tomorrow never comes because when you are poor and have no access to credit, you don’t have the luxury to think about next week or next month or next year.

Without the ability to plan, it is extremely difficult to imagine a different future for yourself. Planning for the future is an essential component of self-improvement, but if you can’t plan and take measures now to determine your future, it is extremely difficult to raise yourself out of poverty. If you have no ability to borrow, you can’t invest in yourself and your family.

So, in effect, poverty obliterates the future.

John Hume understood that the power of credit was the power to imagine a different future. Credit gave people the power to plan, to set aside money today in order to borrow a bit to finance a future stake in society, whether by paying the rent on a flat for a son or daughter to go to university, obtaining credit to buy a machine in a mechanic’s garage, or buying a drum kit for a band.

All of these things are small acts of defiance and self-improvement. Success could be getting a better job than your dad or being the first kid to go to college in the family. In a society where you are regarded as a second-class citizen, non-violent community self-improvement is a potent statement. Crucially for Hume, these small acts of defiance were also acts of evolutionary rather than revolutionary change – a way to power via building stakes rather than destroying states.

In setting up the credit unions, John Hume can be compared to another Nobel Prize winner, Muhammad Yunus, the Bangladeshi innovator who set up the microbank Grameen Bank. Yunus, like Hume, appreciated that small loans given to poor, oppressed women in Bangladesh would have a massive social impact. He also understood that poor people such as Bangladeshi weavers don’t default; it is rich people like Donald Trump who default.

The defaulting rich is one of the many paradoxes of modern finance. The more you borrow, the more likely you are to default, yet the poor tend to pay higher interest rates than the rich despite their lower risk profile. Of course, there are exceptions, but this paradox holds in general. It is poor people who deal with money lenders and pay-day loan providers.

John Hume is remembered for so many achievements, the crowning glory being the Belfast Agreement. Yet his setting-up of the Derry Credit Union in 1960 and the subsequent establishment of credit unions all over the country should be added to his roll call of accomplishments. Credit unions gave people who never had access to credit before the ability to plan financially to secure a better future for themselves and their children.

In that one act, he helped change the lives of hundreds of thousands of ordinary Irish people, North and South. We are all indebted to this great man.