My children were born in Belfast. At the first pre-natal class, I was the only dad in the maternity ward in deepest east Belfast not in a Rangers tracksuit. Apart from that, the whole process was quite normal, apart from the “born-again” midwife whose obsession with “saved” people seemed a bit inappropriate when our daughter was only a matter of minutes old.

Amazingly, our daughter was the only child born in the Dundonald hospital that night. This was, according to the nurses and midwives, highly unusual.

The absence of newborns in East Belfast that night may give those nationalists who believe that they will “outbreed” the unionists some comfort. It also reveals quite how significant is the operational achievement of Holles Street in Dublin. Every year 10,000 babies are born in Holles Street, that’s 28 babies per day. This is extraordinary when you think that some of the hospital’s facilities date back to the mid-1700s.

I am writing this piece in a cafe just opposite Holles Street and the traffic of new mothers, nervous fathers, proud grannies and confused siblings is endless. This is the make-up of our lives and it shows you that even when the economy is stumbling, life goes on and it does so vibrantly. We still fall in love. We still have children and we still worry about their first day in school and agonise over why they don’t seem to be doing a jot of work when their exams are next week.

With the cycle of life in mind, it’s wonderful news that at last a new maternity hospital is being built in St Vincent’s, little over a mile away from where I am writing.

A figure of €150m has been earmarked for the project, with the aim of starting construction in 2016 and opening the doors to a new generation in 2018.

The question that the last census raises is what that new generation will look like.

As if to prove that a faltering economy doesn’t stop the great world from revolving, Ireland is, despite the ruined local economy, experiencing a massive baby boom. Last year there were more babies born than any year since 1980 – the year after the Pope visited Ireland, when Irish people responded to his message of love.

One of the fascinating aspects of the new baby boom is that they are actually the Pope’s children’s children. Each generation is an echo of the one that went before. We are having children later now than our parents, but each baby boom will tend to replicate itself a generation later. So it would be logical to put this baby boom down to this natural process. But on closer examination, when we look at who is having children in Ireland, we can see that this isn’t the case. 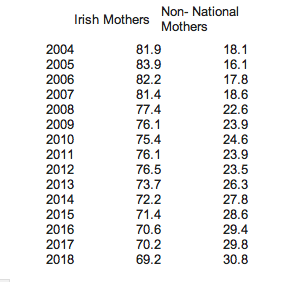 If you look at the table, which is taken from the yearly ESRI Perinatal Reports for 2004-2011 and the CSO Vital Statistics report, you can see that the number of immigrants having kids is rapidly rising. In 2004, the first year that we had information on the nationality of mothers, 18pc of the children born in Ireland were born to immigrants.

Last year, immigrants accounted for 23.5pc of all births. If we take the data and extrapolate the trend out, we can see that by 2018, 30pc of the babies born in Ireland will be to non-Irish mothers. In contrast, Irish mothers, who accounted for 81.9pc in 2004 are likely to drop to 69pc by 2018. 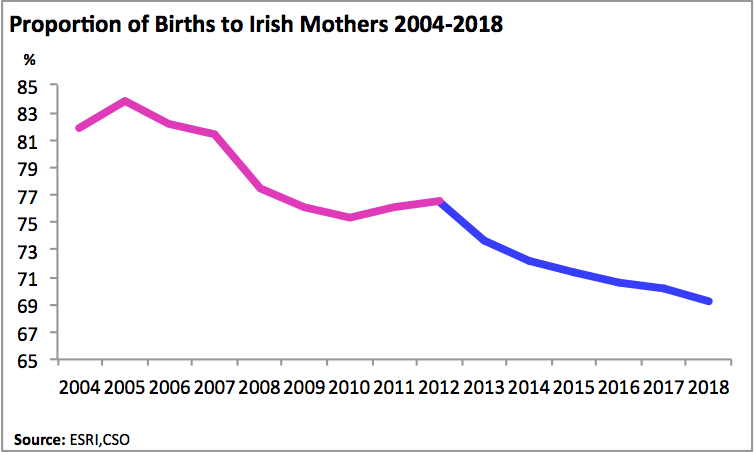 Two demographic factors could be going on in the numbers. The first could explain why the proportion of Irish-born mothers is falling quite rapidly. One explanation might be because Irish-born women are choosing not to have children in much greater numbers than would be normally expected. Another explanation could be that there is such high emigration of women in their late 20s and early 30s – the median age for starting a family. This suggests that Irish-born mothers are simply not here. They are in Australia, the UK or elsewhere.

On the other hand, immigrant mothers are having more kids. This is the normal pattern with immigration. When people arrive from a foreign country, particularly a poorer foreign country, they tend to have larger families. If they are from more traditional countries, this will be the case. Within one generation, immigrant family sizes tend to conform to the norm of those in the new country, but initially they are outliers.

This is why immigration is normally a boost for a country because the immigrant population swells the local population immediately and then for at least one generation, immigrants have more children.

It is clear why we need to get the economy going again and get it growing robustly. The labour force is growing and, as immigrants have more children, the immigrant proportion of the population will be rising most rapidly. In order to head off the type of social problems faced by many western European countries with large immigrant populations, such as was seen in Sweden last week, we have to get our economic act together. This doesn’t just mean growth, but education, town planning and housing strategies.

Naturally, politicians react to the concerns of their electorate, but electorates are already grown up by then. Real economic planning doesn’t start at the ballot box but in the maternity ward which is why what happens today in Holles Street is of such importance to all of us.

“Real economic planning doesn’t start at the ballot box but in the maternity ward”. Good line. Perhaps the Northern Ireland immigrants and the Republic’s immigrants will combine and vote for a united Ireland.

Is this extrapolation published and justified anywhere? I have maths questions.

I guess this is not just an Irish phenomenon. Old, but an interesting read:
http://www.demographic-research.org/Volumes/Vol19/9/

WOW, touchy subject? No takers? Ok let me kick it off… It all boils down to can we handle the emigration a little better than other countries? It’s funny, you can’t talk about this subject without some PC nut claiming you’re racist. But in my opinion (and we are still allowed to have opinions) and without over simplification, there are three types of emigrant; Type 1. Mainly Economic emigrants. Those that want to integrate and contribute to the destination society. These guys are prepared to work to earn a living, pay taxes and obey the local customs / laws etc.… Read more »

Good post Hibernian.
It’s that old problem with forced integration and the stifling of debate/discussion because of the Orwellian PC brigade.

During the eighties, 700,000 people sat the leaving cert. The number of people working declined from 1.6 to 1.06 millions. The only career option for most was sweeping the floor of the local food/super/market @ £1 an hour. There is nothing wrong with a high birth rate provide you have a turbo charged economy generating sustainable employment, not going to happen when we are locked in the overvalued euro. In the 1950’s , families of 15 kids were common, their only option was to join the half million who emigrated. I have never seen the ratioale in encouraging people to… Read more »

Ancient Irish Settlements We are a land of Immigrants except those now are perceived as ‘New’ . Most of us are only a few generations Irish .I am a third generation.Population movement is a flux always and it is the Elite that only benefit from it . The current implosion of arrivals will be seen as being greater than Cromwells Plantation .Especially in terms of numbers and unlike the former the latter will create a new working class and assist in the polarisation between the haves and have nots .It is a recipe for the direction politics will play in… Read more »

I suppose the one thing most people agree about when discussing “austerity” is that it doesn’t require a great deal of creativity to implement. Maybe it’s just as well, because when you look around the present ministerial cabinet one cannot but conclude that the level of creativity amongst the present incumbents is very similar to the previous FF/Green “gombosity”, (gombosity being a word that I have created to describe a ‘collection of gombeens’). I am tempted to suggest that the present gombosity looks a good deal more sober than the last outfit, but given their aversion to providing “breath tests”… Read more »

Look at the amount of money that’s poring out of this country.
How many people here living on social welfair are able to send money out of the country as if by magic.
For some people coming to Ireland is like winning the lotto.

Hi, This article is necessary, timely, very courageous but the point is badly made. You could do something straight away to balance the numbers in favour of the natives rather than increase the birth rate you could restrict the numbers coming to work here irrespective of ethinc origin, releigious belief, sexual orientation or gender. Can’t imagine the mullingar motor mouth et al would be too happy. He wouldn’t be able to fuck the staff every which way he wanted with min wage jobs, revolving door contracts intimidation and harassment then would he? The establishment want MORE dirt cheap foreign labour… Read more »

In his lecture “Immigration and the Mature Welfare State” Milton Friedman makes a compelling argument that they are incompatible. In summary, no historical record shows an ‘economic’ boost delivered by immigrants when the country receiving them has a mature welfare state, quite the opposite. This incompatibility produces the ethnic ghetto due the Welfare System’s incongruity to upward mobility of the immigrant. Friedman was no fan of the welfare state but a big fan of open migration. He asserts that immigration only has had a positive economic effect on those countries senza welfare. He backs up the claim with records etc.… Read more »

Ladies and Gentlemen, this is something that must be done outside maternity wards, to give the kids a future. It is expected that adults take this in their stride, would’nt ye think?

On May 29, the resolution, K490, sponsored by Assemblyman Phil Steck (D-Schenectedy), was introduced. K490 currently has 19 co-sponsors, including 3 Republicans. It has been referred to the Committee on Banks.

That’s a record for the blog, Milton Friedman AND Schumpeter, both fascist economists, quoted here within a day of each other.

Either the blog attracts such luminaries, or people have just no idea what they are talking about – which is it DMcW?

Tony Brogan…Court 16 four courts 11.00 today..Judgement due on major case against B.O.S come down if you can..might be a good experience for you to enjoy while in Ireland

Tony Brogan…Court 16 four courts 11.00 today..Judgement due on major case against B.O.S come down if you can..might be a good experience for you to enjoy while in Ireland,Call me if you can.

DMcW, you posted this “baby” in “Behvioral Economics”. Well how’s this for obscene criminal behavior, and in public too!

The City of London, Troika Turn the Eurozone into Asset-Stripping Death Trap: Derivatives and Deutsche Bank

Just have a look at the effort to save Deutsche Bank sitting on $72 Trillion derivatives worthless paper.

This is obscene offensive public behavior!

Behavioral economics, the chapter of this theme, what does this mean? A seemingly harmless “well-intentioned” approach? From Nov 2012 : Watch out Ireland! Behavioural Economics “Scientists” heading to Dublin The Economic and Social Research Institute (ESRI), ESRI’s multi -million euro budget comes from the Department of Finance, other Government and international bodies and an assortment of business interests. The ESRI website announced the horrible event: “Applying Behavioural Economics to Public Policy”. One of the UK’s leading policymakers will describe how insights from behavioural economics are being used to design new initiatives across UK government departments and agencies. The session will… Read more »