Opec’s leaders had a choice, and they chose Putin. We shouldn’t be surprised 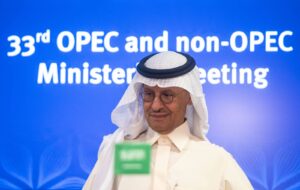 Opec’s decision to cut oil production, when the West is facing a winter of energy shortages, should not be forgotten. The Organisation of the Petroleum Exporting Countries is led by the despicable Saudi Arabian regime — you know, the one that chops up journalists when it isn’t chopping off hands and heads.

Opec’s tinpot dictatorships are less countries than family businesses — undemocratic, venal and regressive — and they are now firmly on the side of Putin’s kleptocracy. Why should we be surprised? Perhaps more surprisingly, the recession that these regimes will provoke next year in Europe and United States will cause oil and energy prices to fall and, when they do, democratic countries should sever all ties with them.

Fossil fuels are the planet’s enemy number one, and one of the positives of weaning the West off carbon will be choking revenue to these corrupt theocracies. Amid current panic it may be hard to believe, but energy prices will collapse in the decade ahead and the Gulf regimes will disappear. When we remember the week at the beginning of October 2022 when they made their choice, we might want front row seats and popcorn to cheer the demise of this patriarchy of fundamentalists.

The Gulf regimes will go the way of the Soviet Union in the 1980s. It’s a tale worth retelling to give us perspective about how the global economy will play out over the next decade.

Our story begins in 1973, at the end of the Yom Kippur War. Arab oil producers reacted to Europe and America’s support of Tel Aviv with an oil embargo, which saw oil prices quadruple. As with today, the spike in energy prices caused a huge transfer of wealth from energy consumers to energy producers. The Gulf statelets became fabulously wealthy and, displaying the age-old lack of imagination of the rich, spent this money on brands, yachts and bling from Saint-Tropez to Fifth Avenue.

Strategically, Europe reacted to this transfer of wealth by running into the arms of the USSR, assuming the Soviets were more stable and would be more reliable suppliers. Thus emboldened, the Soviets used these funds to prop up their crumbling economy.

Back home, both the US and Europe experienced relentlessly high energy prices, as is the case today. The resulting inflation forced up unemployment and crushed economic growth. Meanwhile, another oil shock five years later, following the Iranian Revolution, caused prices to rise yet higher. The Soviet Union, now with coffers overflowing, reacted to the Iranian Revolution by invading Afghanistan, intending to stem the spread of Iranian-inspired Islamic fundamentalism in Russia’s soft Caspian underbelly.

As long as oil prices remained buoyant, the Soviet Union could keep its army financed and at the same time pay for its various client states from Vietnam to Mozambique. But there is a relentless cyclicality in the global energy market. As they say in the business, “the solution to high prices is high prices”.

When energy prices rise, oil and gas fields that are unprofitable at “normal” prices become profitable at elevated levels. Supply cranks up. But the high prices which coax more supply simultaneously crush demand in countries that consume energy. Very quickly we get a glut of energy and prices fall, causing the revenue of oil producers to fall.

And once those prices fall, it takes a long time for the glut to be used up, not least because oil consumers use the period of high prices to become more energy efficient. In the 1980s, the price of energy collapsed. By the mid-1980s, oil prices, which had reached $100 a barrel (in today’s prices) were below $10. At that price, the Soviet Union had no hard currency.

When Gorbachev announced perestroika, it was assumed the Soviet Union would be able to import essentials from the West to tide itself over as its economy restructured. But with oil revenues depleted, it couldn’t import the basics. Shortages and queues followed, profoundly undermining the politburo at a time when it had just allowed freedom of the press — the freedom to complain. It is unlikely that communism in the USSR would have collapsed with oil prices at $60 a barrel.

Today, the West is throwing all its technological savvy and entrepreneurial nous at weaning us off fossil fuels to save the planet. By the time this latest spiteful energy price hike feeds through our system, our economics will be so far down the road away from carbon that energy prices will be trending down to levels never seen. Renewables, nuclear and a much-depleted use of fossil fuels will provide our energy. Regimes in the Gulf will, like the Soviets of the 1980s, be running out of options and, without oil, no one will care about them.

Some of their more enlightened patriarchs must see the writing on the wall. Sheikh Rashid bin Saeed Al Maktoum, known as the founder of modern Dubai, when asked about the future is widely reputed to have said: “My grandfather rode a camel, my father rode a camel, I ride a Mercedes, my son rides a Land Rover, and my grandson is going to ride a Land Rover, but my great-grandson is going to have to ride a camel again.”

And when they are looking for friends to help them out, when their oil-soaked Camelot is threatened by a billion poor Africans to the south or a billion poor Indians to their east, or 100 million Persians to the north, we should remember October 5th, 2022, before we make our choice.