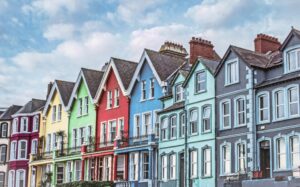 Since I was an infant, all Irish economic crises have been home grown: the result of weak local management, poor policy and an unwillingness to face down local vested interests. A rentier class, living off the labours of others, comprise most of those vested interests. While the global economy has been largely supportive, when we screw up, we have only ourselves to blame. In economics, Ireland goes bad from the inside out. With the present housing fiasco, we are imperilling an economy that is generating opportunity and jobs, via our own stupidity.

Since the 1980s we have experienced two major economic crises that came with the distinct “Made in Ireland” brand. We lost an entire decade, 1977-1987, because the political class could not run the shop with care. In Garret FitzGerald we had a leader who spoke the language of financial probity but ran the place like Juan Peron. In Charlie Haughey, a man with Eva Peron’s expensive tastes, we had a cavalier borrower, who came to his senses in the late 1980s, only after more than 100,000 had already emigrated. One was a social democrat who behaved like a populist, the other a populist, full stop. In the Celtic Tiger period, the entire political class – from politicians to civil servants and central bankers – was gleefully cheerleading as Ireland turned from a country with a banking system to a banking system with a country tied on to it, giddy on the silly belief that we could get rich buying bits of Ireland from each other with other people’s money.

Today, a brilliantly innovative economy, maybe one of the most dynamic in the western world, risks being undermined by another local failure: Ireland’s inability to provide accommodation for its people at a reasonable price. This is a policy failure in which many of us are complicit.

This may seem counterintuitive but let’s start by looking at the wealth statistics published by the Central Bank this week. The data show that Irish people’s wealth is rising. Surely, you might ask, evidence of becoming wealthier is a good thing? Yes and no. If we are becoming richer because we are producing more products for sale, being more innovative and generating more revenue, with new or existing companies winning in competitive markets, that is good wealth. However, if people are getting rich by doing nothing, and watching house prices rise, this is problematic for a society because it rewards hoarding rather than producing. Rising housing wealth creates income and generational inequality and ultimately is a mirage, as we saw so clearly in 2008.

According to the Central Bank, the net wealth of Irish households is now greater than €1 trillion, that’s nearly €200,000 for every man, woman and child in the State. It may sound good but the problem is that most of this €649 billion is in housing assets. There was also a substantial increase in savings during the pandemic, which will be run down. Digging a little deeper reveals that the value of privately owned real estate grew by €95 billion year-over-year (YoY) in the first quarter – the highest annual revaluations on record. All told, property prices are rising by more than 14 per cent nationally. Close to 70 per cent of all household wealth in the Republic is in property. Furthermore, as taxes in Ireland are on labour, consumer spending and businesses rather than property, this wealth is not being taxed and, more problematically, this means inherited wealth now offers a lifestyle to “rich kids” unattainable for those who are working and trying to save. Inheritance “bakes in” inequality.

Already we are seeing homeownership rates collapsing among young working adults. The share of 25-34 year olds who own their own home halved between 2004 and 2019 (60-27 per cent). They simply don’t have the income. They then compete with others in the rental market. And we know the story there. The latest Daft.ie update reports just 716 homes available to rent nationwide on August 1st – down from 2,500 a year ago.

Meanwhile, the number of evictions in the first half of 2022 jumped by 58 per cent compared with the latter half of 2021, according to Focus Ireland. Average market rent nationwide was €1,618 (climbing up to €2,387 in parts of Dublin) per month between April and June – an increase of 3.3 per cent on the first three months of the year, and 12.6 per cent higher than the figure last year.

What’s the solution? Well, it’s not that difficult. We need to intensify land use, accelerate building, penalise hoarding and encourage development of existing and potential sites. Planning for better land use means building denser communities. Above all, Ireland needs to build and continue to build. The solution to too few homes is more homes. No matter how you dress it up, that’s the only way. Nothing else create homes, other than building extra homes.

A site value tax is essential: taxing sites, all of them – yours, mine and everyone else’s. Property is creating wealth but at the risk of sounding like the French 19th-century anarchist Pierre-Joseph Proudhon, property is a form of theft, as rising property prices are stealing the future from hundreds of thousands of our neighbours priced out of the game. Tax the sites, and in a jiffy those hoarding idle sites, will bring those buildings into use. We must encourage with huge incentives, not modest ones, the redevelopment of derelict sites and buildings. And we must build council houses, subsidised by the exchequer – yes, the rest of us, the lucky ones.

Unless property wealth is taxed and hoarding of land and homes not in use is penalised, we can conclude that Ireland is not serious about fixing housing. Homes are about dignity. Not having a home must be the most stressful state imaginable, leading to all sorts of personal, familial and societal trauma.

Every time the wealth of housing goes up, the worth of everything else goes down. It’s all related. The worker is undermined, as the hoarder is rewarded. As house prices rise, the more work you must do to get that house, so the value of your work goes down. House price inflation means, arithmetically, deflation in everything else. You can only undervalue a person’s work for so long, until they say they’ve had enough. We are close to that. I can feel it, can’t you?