Should Putin be looking over his shoulder at his own borders? 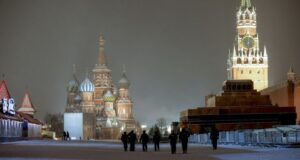 Hemmed in by the Kremlin and the Basilica of St Basil, Red Square comprises the twin powers of contemporary Russia: the government and the Orthodox Church. Despite the religious significance of the cathedral, the square is anchored by the bulky mausoleum of Lenin, atheist father of the Soviet Union. The tomb is guarded by soldiers, their faces lit by the eternal flame to the fallen Russian war heroes.

Red Square is ground zero of all things the Russian state holds dear. This is the epicentre of Moscow, the source of Russian power. Yet when I first set foot on the square many years ago, what struck me were the faces of the many Russian tourists from various regions of this vast country. Most of these people were not the blonde, green-eyed Slavs of Russian propaganda murals; there were many Asiatic people, with more Asian than typical European features.

That’s when it struck home to me that Russia is a European country in part only. The vast majority of Russia lies beyond the Urals in what we describe as Siberia, people of European descent make up a minority of the population, sprinkled among various races who predate the quite recent Russian conquest of Siberia by many generations.

Today, Russia is a multi-ethnic country, with 35 official languages and more than 100 minority languages. Orthodox metropolitans regard Moscow as the spiritual home of eastern Christianity, the “third Rome” (Constantinople having been the second), but Russia is also home to millions of Muslims and Buddhists and, intriguingly, Europe’s last pagans, the Mari people of central Russia.

In terms of numbers, there is no official data collected on religion in Russia, but a recent report from the US State Department suggests that around 63 per cent of the population is Orthodox. The chairman of the Religious Board of Muslims of the Russian Federation estimates that in 2018 there were about 20 million Muslims in Russia, equivalent to about 18 per cent of the population. Meanwhile, the Russian Jewish Congress believes there are about 170,000 Jews in Russia, and approximately 1.5 million people of Jewish heritage.

The European population is falling dramatically, as has been the case in all post-Soviet European countries, while the population in mainly Muslim republics, is rising, indicating that the complexion of Russia will change profoundly in the years ahead.

Today, most of the country is Slavic and ethnically Russian, but most of the wealth in Russia – largely under the ground of this vast landmass – is not in Russian ethnic areas. To put the country’s wealth in context, Russia’s mineral extraction tax accounts for 29.2 per cent of government revenue, while a broader accounting from the Audit Chamber of Russia estimates that almost half of all revenue comes from oil and gas alone. Almost all of this is in Siberia, in regions that may in the future be contested by various non-Russian ethnicities. Siberia also contains an estimated fifth of the world’s timber.

Countries that are so dependent on resources suffer from what economists call “the curse of resources”. They are endemically less stable than countries without resources because the resources elbow out other activity, becoming a source of corruption, inequality and, ultimately, political instability. In the longer term, could the fall in the population, the various ethnic groupings and the concentration of resource wealth in a few hands be a recipe for atrophy – not just of the Putin regime, but the country itself? Countries do break up. The Russian imperial project was a 2½ century Romanov experiment from Peter the Great to Catherine the Great and on to Tsar Alexander the Second as the Duchy of Muscovy pushed south and east. That was a long time ago and the facts on the ground have change profoundly.

Deeply decentralised powers with no democracy or representation, typically run by an insider network, are a lot more fragile than constantly quarrelling, dysfunctional democracies of the type Putin scorns. This is why the endlessly fractious Italian state, with its compromises, coalitions and revolving door governments has proved to be far more enduring and coherent than tightly controlled autocracies such as Syria, even though, at first look, Italy may have seemed more unstable than the 30-year Assad regime. Every year that Putin is in absolute power he actually gets weaker not stronger.

War changes everything. Putin’s control was based on coercion and money. Money from an economy open to the West could keep the regions happy with handouts, while repression from the military and police kept would-be opposition movements, either ethnic or democratic, on their terrified toes. As the war drags on, nationalist fervour will wane and then the prospect of years of sanctions, means hard currency will dry up quickly.

The West now wants regime change, so sanctions will not be lifted easily. Cut off, the Russian economy will falter. Now that the Russian army has proved to be less impressive than expected in the field, the edifice of the authoritarian state which underpinned its main weapon, fear, begins to fracture. The brain drain, already unprecedented, will continue apace. Russia is likely to lose its most valuable asset: its people. In fact, the EU, as well as lifting visa requirements for Ukrainians, should do the same for young Russians who are currently trapped in Putin’s laboratory. Ethnic and nationalist movements, particularly in the Muslim Caucasus, will become more restless.

What we may be seeing is the second phase of the destruction of the Soviet Union. The first part was the separation of the Baltics, Ukraine, Georgia and the various ’stans. Now the unfinished business in imperial Russia itself emerges. Longer-term, a weaker Russia, deploying the Putin doctrine of striking when your enemy appears weak, might look attractive to others. Having dismissed the sanctity of international borders, should Putin be looking over his shoulder at his own borders? After all, in the entire area of Siberia, there are less than 30 million Russians of all hues, while on its southern borders a billion resource-starved Chinese might quite like to get some of that mineral action. A fragile Russia can’t defend these thousands of kilometres of borders indefinitely.

The 21st century may only be starting.