Recently there has been lots of talk about who is buying Ireland. Foreign investors are buying Irish government debt and foreign funds are buying Irish prime property assets. Both of these developments are taken as barometers of how foreigners perceive this country.

The figures for immigration are staggering. Fifteen years ago there were precious few immigrants here. Today, one-sixth of the population is foreign born. This is a massive social transformation by any measure. My preferred measure of immigration is air traffic and in particular, the Ryanair route planner. These days, people immigrate here by text. It’s not a big deal really. Someone gets a text in Poland about a job or a gig and a few days later they are in a housing estate in Dublin, Waterford, Cork or Limerick bedding down, three to a room, about to start a new adventure.

They come and go regularly. A Polish girl who works with me has just headed home for a long weekend. She’ll be back on Sunday night, yet she is an immigrant who may or may not settle here.

Unfortunately, there isn’t too much hard data out there about who has come from where; I took the latest CSO numbers on immigrants and plotted it. 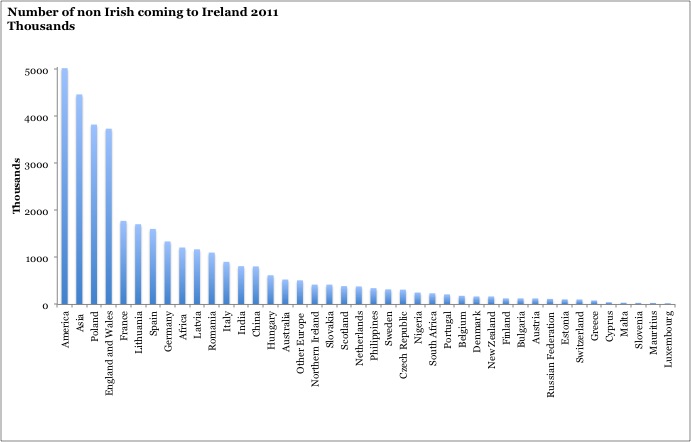 As you can see from the chart – and this may come as a surprise – the biggest group of immigrants in Ireland are Americans. These may well be Asians – mainly tech workers – joining American technology companies but it is more likely that these are two massive areas on the move and a tiny fraction end up here.

The next up are the Poles and then the British, who have always been a sizeable immigrant population. Then we have decent numbers of Germans and French people here.

However, the next chart is more interesting as it shows how the immigrant population has changed over the past few years. The most striking aspect of the change in population is what could be called the ‘Flight of the Slavs’.

CHART 2: FLIGHT OF THE SLAVS

The Slavic population here has slumped from its boomtime peaks of 45,000 immigrants who arrived here from the new EU countries in 2008. This figure has dropped dramatically and it underscores the fact that lots of immigrants have no intention of staying here. The Eastern Europeans come for jobs and when they dry up, they leave.

This suggests that the Irish labour market for East Europeans behaved like a prosperous region of the US. When a place like Massachusetts booms, migrants from all over the US flock there for opportunity. When the economy turns down, the immigrants switch off, pack their bags and head elsewhere. Their behaviour is totally different to rich EU immigrants. While fewer rich Europeans are coming here, they don’t evaporate at the sign of a downturn. They display more normal patterns.

The reason for this is that they are not working-class immigrants. They are much more likely to be working in professional jobs in large foreign- owned companies, which are much less sensitive to the collapse of the domestic demand. In contrast, the Slavs worked in the domestic economy and when it collapsed they were on the first Ryanair flight out of here.

African immigrants are not going home when the economy turns down, and this is probably because the quality of life for their children and the opportunities they believe that children will have here are better than the countries they came from.

Almost every region outside Europe where the immigrants are coming from will be growing much faster than Ireland in the years ahead.

Ireland and Irish companies need only a tiny slice of the action in these countries to make a huge difference to income here. However, as anyone who has ever exported anything will know, it is difficult to get people who don’t know you to buy something from you. We all do business with people we know.

Wouldn’t it be an interesting notion to appoint ambassadors for Ireland among these Chinese, Indian and African immigrants?

Our State spends a fortune on the likes of trade missions, Enterprise Ireland offices and expensive political trips to curry favour in elite circles in faraway places for Irish companies. However, the best sales people for Ireland are right here under our noses. They are the immigrants.

These people could open doors, understand the culture, understand the mentality and do more in a few phone calls than official Irish agencies could do in a year of “glad handling”.

People make the difference and we have tens of thousands of people here who have aspirations that we could harness. Now if that isn’t an expression of soft power I don’t know what is.

DAVID MCWILLIAMS’S DAILY FINANCIAL UPDATE IS OUT NOW ON GLOBALMACRO360.COM

You posed a question at the start about people buying into Ireland as opposed to buying it. The graphs you posted show the poles have abandoned the place as a destination for work. The record levels of emigration to April 2013 supports this because half the people leaving had jobs.

If we make ambassadors of people who are voting with their feet will we be expecting them to lie through their teeth? I can tell you the Portugeese Workers on the new M7 road and the Turkish workers on the Ennis bypass were disgracefully treated.

I know what you are saying. But try to see that there are opportunites for people in this reasonably emotive subject.

Last week I watched the BBC’ Economist’s rather bland “The Truth About Immigration”.
Obvious Summary: Modest immigration is good both socially and economically for the native population, excessive immigration which all agreed the UK has is bad, except it’s not bad for business profits as they deflate lower-end wages and keep the general cost of living down.
So here is your choice? Your country poorer without immigrants or your country richer with immigrants.

Bono to speak at Davos as investors upbeat on economy

Immigrants /Emigrants Just the tool to destroy the cohesive nation state. Loyalty will mean nothing as people are cut adrift with no roots to gather sustenance. No roots= no plant, no growth, no flowers, no fruit. People wondering why they are wandering. Flotsam floating around the world. Part of the master plan of destruction followed by a unity called One World government, or the New World Order. In the meantime the high taxes and insufferable debt make most places hard to consider as a refuge for life and civil living. Families and community broken apart. Time to raise the drawbridge.… Read more »

Emigration, not Immigration, is our Problem says AAA

51st State of America http://www.youtube.com/watch?v=QUefzNi_pX4 Look out of your windows, watch the skies Read all the instructions with bright blue eyes Were W.A.S.P.s, proud American sons We know how to clean our teeth and how to strip down a gun We’re the 51st state of America Our star-spangled Union Jack flutters so proud Over the dancing heads of the merry patriotic crowd Tip your hat to the Yankee conqueror We’ve got no reds under the bed with guns under our pillows We’re the 51st state of America Here in the land of opportunity Watch US revel in our liberty You… Read more »

A better link for the above

China to start dumping US bonds. This might disrupt the happy happy mood in Davos

“Old definitions of what constitutes a nation need to widen as the world changes. The question of sovereignty and independence and its importance at the start of the last century needs to be re-examined. Sharing the same currency as 18 other, often larger, countries is one reason…. As Ireland continues to be talked about as an economy rather than as a society, and the Government aims to make us the Best Small Country in Which to do Business, the need to re-think this country as a nation grows more apparent.”

It is always the invader who changes the demographics of the nation/state invaded. Half the world would still be in the stone age but for that!!
Not saying I approve of invasions but that is what is happening to the western world right now. One of the “benefits ” of free trade :) :)

After JP Morgan gets 14bn in fines last year the CEO Jamie Diamon gets a pay rise of course to bring his remuneration in 2013 up to $20m TWENTY MILLION DOLLARS.

Like I have been saying all along: The more you fuck your customers the more regarded you are and the higher your pay. Max Keiser refers to them as psychopathic bankers. I’m inclined to agree with him.

I sure they listening to a busker – an invited “activist”? – a talisman!

“Bono lays down challenge to world business leaders”
I am not to sure they are listening to a busker – an invited “activist”? – a talisman

Big shout out to The ‘Ming’

I thought it was called self-employment.

Hugo Salinas Price on the foolishness of imaginary money, and a number of germaine observations on how our leaders and economists are leading us to the destruction of our civilization.

Brian Lucey’s analysis and suggestions on the banks:

What goes around comes around.

People are caling HSBC the ‘new Northern Rock’ on Twitter.

We live in hope.

100 lines for monday morning, must strive harder at my verbiage.

“Personal freedom is a fine ideal, but unrestrained rampant individualism can undermine the common good”

It would take a strange person to argue with that.

This article is for you Mr. bonbon:

“As physical proximity loses importance, last century’s trend to urbanisation could reverse. In 100 years, people may be spread out more efficiently across the earth. They may marvel that greater Tokyo once had more inhabitants than Siberia.”

This is the kind of change I was referring to in relation to cities the other day but then you knew that.

“Churchill, the Hitler supporter who decided he did not want German speaking fascism”

Just as was reaching 40 I heard it said that life begins at 40 – so now the spoiler for all you might be 40 year olds – I can safely say that that it was a lie and that life just got harder at 40. It could be a timing thing and that I was just an unlucky one – inflation kicked in just as I was reaching 40. I was then told that 40 is the new 30, with this new information I was temporarily consoled, as this might mean that I get to be 40 at 50… Read more »