State has completely lost control of the housing market 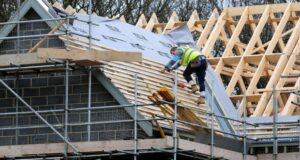 Two plumbers are sitting in my kitchen, drinking tea, shooting the breeze. They are out the door with work. The sites are buzzing and, according to the lads, there is any number of “small jobs”. But the price of materials is crippling everyone and, even if the client can pay, it’s hard to get your hands on everything – from wood to piping to radiators. In fact, they’ve just come back from a run to Belfast to get a few things. It may be tight up there, but not quite as bad as down here.

Higher prices and the huge demand for tradesmen are affecting house prices. The latest news on the housing front is grim. Residential property prices are now 15.3 per cent higher than they were a year ago. The momentum is steeply upwards. Compared with last year, when property prices rose by 3 per cent, the past 12 months have been a nightmare for buyers. Nationwide, houses prices are up 15.5 per cent and apartments are up 14.3 per cent. The cost of apartments in Dublin is surging – 17.8 per cent higher than in 2021 – but house price increases are higher in the rest of the country than in the capital. Put simply, the State has lost control of the housing market.

Just to put things in context, property prices have recovered by about 117 per cent from the trough in 2013 and are currently just 2.5 per cent off their Celtic Tiger peak. This is not good news for anyone because the higher the price, the more fragile the market and the more susceptible it is to collapse. Extreme high prices are never a sign of health, always of an underlying weakness either in the structure of the market or the expectations of the buyers. We’ve been here before. We don’t want that again.

A cursory glance at the global economy argues for extreme caution. We already have an affordability crisis. The average home in Ireland now costs about €330,000. The median disposable income of a household with two working-age adults is about €50,000-€55,000 (putting their gross income at probably about €80,000); there’s clearly an affordability crisis.

That’s the buyers’ market. What about the renters?

When it comes to renting apartments, the situation is even more critical and is the primary reason the Spurstowe Arms in Hackney was jammed with Irish twentysomethings last Sunday night. Excessive rents drive people out.

According to Glassdoor, the going graduate salary in Dublin is currently about €35,000 (including bonuses, etc), leaving take-home pay of just over €29,000, which works out at €2,428 per month or €560 per week. The latest Daft report points to a 10.3 per cent annual rise in rental prices, pushing the average one-bed rent up to €1,407. In Dublin’s cheapest postcode, D22, monthly rent for a one-bed is €1,295, or more than half of a graduate’s pay packet. Living alone, despite a good job, is not an option.

Instead, a graduate must rent a room in a flat – if they’re lucky enough to find one. The cheapest single room within Dublin city sets them back about €590 per month, more than one week of their take-home pay. But the dilemma is not just price, it is availability. There are simply not enough apartments – of any sort – out there.

What’s the solution? It remains, as this column has long argued, a shortage of supply. We fix a problem of a shortage of supply with more supply, more homes, more apartments, for blocks and denser living at every price point – social homes, posh homes, in-between homes.

We have a choice: either Ireland cuts its population by mass emigration of younger people and a ban on immigrants, or we build more homes. What do we want? It’s that simple.

In economics, there’s an expression that the solution to higher prices is higher prices, meaning that as prices rise and rise, the higher prices coax in more suppliers, who supply more of the product and eventually this increased supply pushes down prices.

The market is governed in a self-correcting manner. There are many reasons why this smooth adjustment does not always work when it comes to the market for homes. Part of the reason is that supply cannot react quickly, because of planning delays, and also that demand is characterised by panic, where higher prices cause more demand rather than less demand, at least initially. But the general point remains valid: building more homes is the only way that more homes will become available. There’s no alternative.

This means we must have lots of social housing, subsidised and paid for by the State and other, richer taxpayers. It also means we must have lots more commercially developed housing. We can debate the desired mix of the two, but Ireland’s residential property market has been so crippled by undersupply in the past decade or so that new urban housing projects should generally be welcomed. Yet they are not.

Why do we have such an endemic problem of nimbyism? I can understand nimbyism from existing homeowners, termed more accurately “home-voters” in the United States. The tighter the supply, the more their wealth rises. But how do we explain the young twentysomethings who are locked out of the rental market because there are no places to rent, objecting to plans to provide more places to rent?

They should be yimbys (yes-in-my-backyard people) but often they side with the middle-aged, middle-class nimbys. Many of our parties on the left as well as the centre right support policies on the ground, such as restrictive planning, that will benefit only the older, wealthy homeowners and property-rich classes. It’s easy to understand why parties that support the status quo would support restrictions on planning and development – but surely not those parties who claim they want to see more homes made available? That’s makes no sense and only serves to exacerbate the crisis.

Back at the kitchen table, talk turns to the Ukrainians and where they are all going to be put, and who’s going to pay and how come lots of homes and accommodation seem to have been found so suddenly, while our housing crisis continues to worsen. It’s not hard to see where the wind might be blowing. One of Putin’s long-term gambles was driving out a few million refugees to parts of Europe already experiencing housing shortages and see what happens. This weekend, more than one in four French people voted against immigration and of course, across the way, Brexit has already happened.

There are many reasons Ireland needs to fix housing. Countries can tip very easily. Not having a home means not having a stake. And not having a stake means there’s not much to lose. When you’ve nothing left to lose, it’s quite easy to burn the house down, particularly if you don’t have one.