The big events that will affect Ireland in 2022 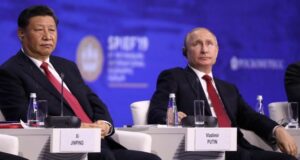 Happy new year. A few events to watch out for in 2022 could have a material impact on global economics. As Ireland is so plugged into the world economy, these are some of the issues that are likely to percolate down to us at the national level.

Just when you thought it was all over and they had got Brexit done, it continues to haunt us. The Tories simply can’t let it go because they need Brexit and the theatrical enemy of Europe in order to rally the troops. The latest twist is that Boris isn’t “Brexity” enough for the Frosty wing of the Conservative Party. Expect Whitehall to continue weaponising Northern Ireland in the ongoing search for grievance and finger-pointing. In the meantime, trade between the two jurisdictions on this island will continue to grow apace, bringing the all-island economy closer as it becomes ever more vibrant. Ireland’s 50-year economic diversification away from the UK will gather pace.

Sometimes you only miss people when they are gone. While Germany will certainly miss Angela Merkel, without her the direction of travel in Germany – and therefore Europe – is likely to become more federalist, more green and more integrated. A possible wild card this year could be the European Central Bank (ECB) directly lending to governments to finance the Green New Deal. It has been hinting at this for some time and maybe 2022 will be the year it acts, finally burying the Maastricht Treaty’s various rules and dictates. The pandemic did for Maastricht. Expect more ECB support for Italian bonds if there are tremors in financial markets.

These tremors in the market could come from the sense that the Federal Reserve in the US needs to raise interest rates faster because inflation is running higher.

There are two schools on inflation in the US. One is “team transitory” (which I am on) who believes that inflation is temporary and will fall back. In contrast, “team permanent” believes that inflation expectations are already rampant and see stagflation (higher inflation and lower economic growth) as being most likely. To date, the latter camp has been more right. If that remains the case, the Fed will have to raise interest rates quicker, blowing lots of the froth off booming stock markets.

When economies hit the buffers, governments, particularly autocratic ones, try to divert attention. This has been happening in China over the past year as the 30-year Chinese growth miracle comes to an end.

Normally growth episodes end with too much debt, over-investment in phantom projects, recurring insolvencies and debt defaults. China is no different. We are already seeing this play out. China is home to an estimated 90 million vacant apartments after years of over-building. Understanding the significance of a slowing economy, plus the economic reality of its zero-Covid policy, the Chinese Communist Party is creating enemies both within and without.

Internally, a purification campaign is being orchestrated against un-Chinese celebrities from K-pop boybands to TV stars. Externally, and this is where things get tricky, China is testing America’s mettle over Taiwan, threatening the island state and actively promoting the idea that China will annex Taiwan by force in the near future. A war in the China Sea would spell the end of globalisation.

Most argue that this won’t happen as it would mean economic suicide for China, but we should remind ourselves that the best-selling non-fiction book just before the outbreak of the first World War was The Great Illusion by Norman Angell, which argued that war was impossible because the global economy was so integrated that every side would lose.

Sticking with geopolitics, and adversaries testing America’s mettle, let’s talk about Russia. Ever since the Americans pulled out of Afghanistan, the world knows that Biden’s America simply won’t fight, anywhere. Putin understands that this means it is score-settling time. A pro-Moscow government in Kiev would do just nicely – and for people like Putin, Ukraine was never truly independent. Ukraine and Russia are brother nations. Might this be the year Russia moves on Ukraine?

The new German administration is the weak link here because any post-invasion sanctions might provoke Russia into turning off the Russian gas tap that keeps Germany warm in the winter. Any Russian moves would cause chaos in energy markets, but Putin has done it before in Crimea, Georgia and more recently in Syria, where Russia is kingmaker.

The year will end with Leo Varadkar coronated once more without ever really convincing at the polls. The Coalition’s chances of re-election rest on housing. It therefore needs to preside over the building of lots of homes this year. Most recent data from New York (buildingtheskyline.org) reveals that a 10 per cent increase in homes built leads to a 15 per cent fall in house prices and a 10 per cent reduction in rents. As rent inflation is the greater problem blighting Ireland at the moment, the Coalition needs construction to crank up.

In Q4 2020, 18,879 houses and a further 48,492 apartments had secured planning permission, while there were 2,277 houses and 9,970 apartments under construction. Things are going the wrong way for the Coalition.

If the State really wants to get the property market under control, it should finance the construction of tens of thousands of subsidised council houses, keep building and never stop. Financing this would not be difficult. A perpetual or 100-year bond could be raised in the morning. This is exactly what the foreign funds, who are building the buy-to-rent schemes, are doing here; they are selling on the stream of income that is the rental income from these new apartments.

The State could do the same. Public housing needs to be subsidised like public health or education. By undercutting the finance industry, the State could be an active deflationary force in the construction industry which would benefit everyone, bar a small minority.

This Coalition doesn’t appear to see this binary choice with clarity and it appears confused and ineffectual to the electorate, as the polls show. If the penny drops, who knows, politics in 2022 could become fascinating. Don’t bet on it.