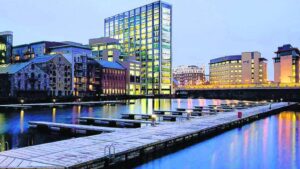 “It’s only when the tide goes out that you get to see who is swimming in the nude.” With this wonderfully evocative image, the legendary investor Warren Buffett summed up what happens in finance when interest rates go up. Ideas, assets and companies that were the darling of investors when interest rates were zero or very low might turn out to be frail, fragile or even frauds. The credit cycle anoints and condemns in equal measure. On the way up blemishes are overlooked in the tide of optimism; on the way down holes are unearthed even in the most plausible stories.

Strange as it may sound in a financial world supposedly governed by hard commercial metrics such as profits, revenues and costs, stories are actually what is being sold, particularly when there’s loads of cash around. The company or asset with the best story wins. If a company can convince investors that it has a special insight into the future and will, any day now, commercialise that insight, that company will attract money. As its share price rises, those who have taken a punt will feel validated, even visionary; those who have not will be infected by Fomo (fear of missing out) and jump in, no questions asked. Then, when the market turns, everything changes.

The best story of the past 10 years was something called “tech”. This all-encompassing, sufficiently vague term managed to cover almost everything that involved how our world is being changed by 21st-century engineering, data and science. Such an indiscriminate definition put into the same category businesses as varied as lads on bikes delivering fast food to lassies in labs discovering gene codes.

With such exacting standards, what could possibly go wrong? Who doesn’t want to buy a bit of the future? Investors bought a piece of whatever bit of the future they imagined such companies were unlocking. But when interest rates rose the future suddenly came with a price. Questions were asked about profits, costed plans and even, in some cases, basic solvency, the type of inconveniences normal non-tech companies have to strive for every day before they get a penny.

The soaring shares of various “tech” companies are crashing. The tide is going out.

Taken together, the six companies which have come to dominate the tech landscape have seen a pooled loss of around $3.8tn, or 34 per cent.

Enormous as the losses are, these companies are the A-listers in tech, companies that actually make substantial profit and have established businesses; what about those zombie “tech” companies that have yet to make profits and were borrowing to sustain their “story”? They’ve collapsed.

Into this boat we can throw cocksure evangelists who claimed that real money was going to be replaced by crypto. Their stories are being investigated, which is uncomfortable for donors who gave the money and they themselves who blew the money. The recent dramatic collapse of FTX, from a $32 billion behemoth to a bankrupt basket case, has been well-documented. $1.3tn in value has been wiped out of the various crypto markets since the start of the year. Having peaked at around $65,000 12 months ago, Bitcoin has collapsed around 75 per cent over the past 12 months, currently trading around $16,500.

As day follows night, the next phase of this collapse and destruction of wealth will lead to some serious questions. On what basis were many of the schemes and opportunities presented to investors? The share prices or, indeed, the prices of the various cryptos can be seen as important indicators. The greater the collapse from top to trough, the more questions need to be asked.

A fall in asset prices in general is good for equality in society because those who depend on assets for their income lose relative to those who depend on wages for their income. As there are far more workers than stock market punters, a society’s internal balance is better off when such booms crash. The best example of this is the 2000 dot.com crash where the impact was largely limited to the volatile wealth of those who took a punt, while the rest of the economy was largely unaffected.

But things could spread. In Ireland the real impact of this tech crunch will be felt in employment, rents and tax revenue. This is where things get serious and consequential for the rest of us. If the losses were limited to investors, speculators, hustlers and grifters, then there is no big deal. You win some, you lose some. But tech companies are cutting jobs everywhere.

Wages will fall in the sector. And because so many companies provide stock as part of employees’ overall packages, the hit will be significant. For example, according the website levels.fyi, an experienced software engineer working at Stripe in Dublin earns around $102,241 in base salary plus around $71,568 in stock, amounting to around $184,033 for the yearly compensation. These amounts will fall and will percolate throughout the industry.

The credit cycle is an unforgiving master. It gives away and then it takes back. But like the tides, it ebbs and flows. In time, after this tech crash, the economy will slow, inflation will fall back, higher rates will yield to lower ones, low tide will give way to high tide again. The key thing, in rough or calm seas, is to keep your financial togs on.