The global population will soon fall, and this will change the world 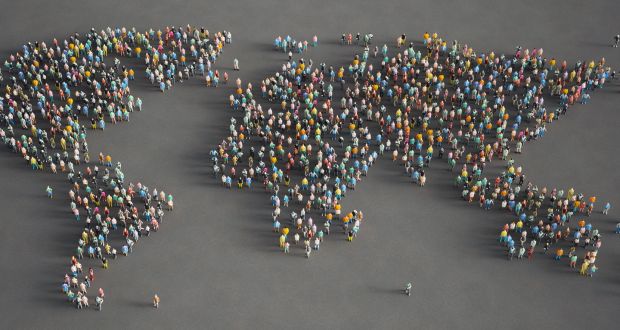 Demography is destiny” is a phrase said to have been coined by the French philosopher August Comte. The Irish people, perhaps more than most, should appreciate the significance of this expression. After all, no European country, possibly no modern country, has experienced as traumatic a demographic pattern since 1840.

With the island’s population only just moving back towards the eight million recorded in the early 1840s, Ireland’s 200-year experience is a source of fascination for demographers. Yet our experience of falling population is about to be copied all over the world, albeit under very different circumstances.

The planet is moving from a baby boom to a baby drought. This demographic fact is sometimes difficult to grasp because much of the talk, particularly – and rightly – around climate change, paints the picture of more and more people vying for the world’s finite resources.

We have become used to the idea of rapid population growth which has been the story of the past 200 years. In 1820, there were one billion people on the planet. One hundred years later it was two billion, rising to four billion by 1975 and six billion by 2000. It is now seven billion-plus.

But this is about to come to a halt. The baby drought has reached every continent except Africa. According to a wonderful book, 2030, by Mario Guillen, the world’s population will grow less than half as quickly as it did between 1960 and 1990. Countries such as China, Sweden, Canada, Brazil and the US are all failing to reproduce themselves, leading to gradually falling populations over time. By 2040, the same will be true for southeast Asia, Latin America and central Asia.

Right now, for every baby born in the US there are 4.4 born in China, 6.5 in India and 10 in Africa. By mid-century the populations of even India and China will have peaked, while the population of Africa will continue to expand so much so that by 2090 four out of every 10 people on the planet will be African.

A comprehensive US study called the Archives of Sexual Behaviour found that Americans had sex nine times less often per annum in 2010 than in 1990. And in terms of generations, those born in the puritanical 1930s had sex most often. Recent generations, Millennials and Gen Zs, had sex least often.

The study suggests the reason for this is that we have far more distractions now where we can get our kicks. Netflix is bad for sex, period. Obviously, there are more single people now, but also couples are having less sex. And less sex means fewer babies. This is happening everywhere in the world except Africa.

Before we focus on Africa, just consider for a moment what these demographic moves mean for geopolitics, economics and global power. The United States, with less than 5 per cent of the world’s population, is unlikely to remain the top dog for much longer. Indeed, Joe Biden’s recent more aggressive stance towards China probably is more a sign of desperation than assuredness.

Europe’s share of the world’s population has halved since 1960: from 22 per cent to 9 per cent of the total.

Now let’s consider Africa. There are about 1.3 billion Africans now. The present birth and life expectancy projections put the African population at two billion in 2038 and three billion by 2062. These are startling figures when you consider what is going on in the rest of the world. The implication of such a population boom is that much of global economic activity will migrate towards Africa for the first time in modern history.

One of the first misconceptions about Africa is that the continent might not be able to absorb all these people. Our misunderstanding about the size of Africa has always overestimated the size of the northern hemisphere. The reality is that Africa is huge. The landmasses of China, India, Europe, the US and Japan could all fit snugly into Africa. In terms of population density, Asia is three times more densely populated than Africa, Europe four times. There’s plenty of room there.

The coming decades will see an agricultural, industrial and technological revolution in Africa as its burgeoning young population provides far more opportunities than the older staid populations of everywhere else.

A rule of economics is that youth culture is vibrant culture, innovative culture and experimental culture. Where the youth are, capital will follow. Older populations save, trying to protect what they hold; younger population are spenders, risk takers and, ultimately, far more commercially dynamic than their greying neighbours.

The first challenge will be agricultural. Who will feed Africa, which is now a net importer of food? Ultimately, the Africans will feed Africa – but using what technology? Africa needs to make a productivity leap from subsistence farming to something more efficient. This will demand new technologies in the emerging field of agtech, where agriculture and technology meet, creating more environmentally friendly agricultural techniques.

Global warming means we can’t just convert carbon into food, which is in effect what we do with modern synthetic fertiliser. Feeding Africa will demand a carbon-neutral approach, offering huge opportunities in the agtech sector.

In terms of raising incomes, no country or region has prospered without going through a manufacturing phase. Beginning with 18th-century Britain, to 19th- century Germany and Europe, to the US of the 20th century and Asia in the early 21st, manufacturing has always powered the initial take-off. It’s a process of shunting, whereby manufacturing shunts from one country or region to another. Something similar needs to happen in Africa.

East Africa looks most likely to be a location for manufacturing. In time, the “Made In Africa” marque will follow the “Made in China” moniker, which itself followed “Made in Japan” and so on. Africa doesn’t seem ready now, but 40 years ago, Ireland had no meaningful pharmaceutical industry, or software industry. Things change.

Technologically, Africa looks set to skip a generation or six in terms of infrastructure. Mobile phones are changing African culture, society and commerce much more profoundly than anywhere else. The reason is that African commerce, because of its reasonably backward institutional infrastructure from banks to retailing and commercial networks, is ripe for ecommerce and the online economy.

Kenya is already the world leader in fintech, having created its own parallel currency from mobile phone credit. Kenyans were doing digital currency before almost anyone else.

As populations shift, economics will respond. Africa is the most exciting prospect as befits the continent that will be home to 40 per cent of all humans by the end of this century.