The programme for government will leave young people behind 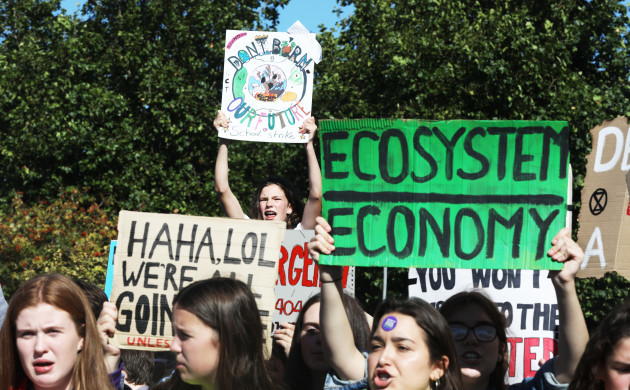 A gerontocracy is a country run by old people or people who are considerably older than the average. Traditional societies (and communist ones) were typically run by the elderly.

For Plato it was obvious that the old would run Athens as they would bring wisdom to decision-making. In contrast, the Roman republic usually vouched for younger men. Later Roman emperors tended to be young not least because being the boss was a dangerous job; many met with premature and nasty deaths.

In the USSR and its satellite states in eastern Europe, the old boys clung to power, so much so that being barely able to climb the stairs of the funeral plinth in Red Square was sufficient to put you in poll position to take over in the Brezhnev era. And Fidel sure stuck around.

These days, the US is a classic gerontocracy. One of the issues in the upcoming presidential election could well be the mental and physical state of both Trump and Biden.

Although not always the case, a country run by old men will tend to jaundice policy towards their constituency. Policy is likely to underpin the interests of the older citizen against the concerns of the young.

The probable new government in Ireland is a government of the old. Voting patterns in Ireland show a distinct generational divide. The two centre right parties – Fine Gael and Fianna Fáil – draw their overwhelming support from the middle-aged and the older generations.

In contrast Sinn Féin is the party of the future, hoovering up the youth vote like no other. The Green Party is a bit of an anomaly, and clearly the older Greens have decided to go into power to get things done, while the younger Greens are wary of being contaminated by the old FG/FF guard.

In terms of the left and the right, the split in Ireland is clear. The young are left and the right are older. You might imagine that this is “normal”, calling to mind the expression – attributed to, among others, David Lloyd George, Winston Churchill, and John Adams – “Any man who is not a socialist at age 20 has no heart. Any man who is still a socialist at age 40 has no head”.

However, in the rest of Europe – particularly France and Italy – the protectionist right is increasingly gaining support of the young.

This shift is understandable because the youth are being left behind on almost every economic metric, from wage rates, to job security to housing. These issues have been made more stark since Covid-19.

Young people work disproportionately in retail, hospitality and tourism. These sectors have been decimated by the virus and many companies will not open their doors again. Youth unemployment in Ireland is estimated (on the CSO broadest measure) at 50 per cent.

In economics there is a phenomenon called “scarring” which refers to the observation that young people who leave school or college in recessions pay for this unfortunate timing with lower wages for their entire careers compared with those who graduate in good times.

A lot of this has to do with their sense of their own value, which is punctured by the recession and financial difficulties in their 20s. It is also a function of the fact that your starting wage sets the floor for your expectations, so that even when the economy takes off again, the recession graduates are starting from a less ambitious standpoint

These factors will definitely apply to the “Covid Generation”. However there are more worrying trends with regard to the wealth gap between generations which will amplify the inter-generational divide. And it is this generational divide that will determine how politics moves in the years ahead.

Data on wealth from the US is quite shocking. There is little reason to believe the underlying trends here are profoundly different. Trends in home ownership, income and inheritance dynamics are quite similar all over the West. It is still the case that the best way to get rich is to have a rich parent.

A recent tweet alerted me to the situation that I thought I understood but didn’t quite appreciate until I saw the stark numbers. The relevant chart shows the share of America’s wealth owned by each generation when they “collectively” turned 35.

The Millennials (born 1981-1996), are on average 31 now. They only own 3 per cent of America’s wealth. It’s hard to see them ever catching up under present policies.

The US needs a massive change in economic direction to rebalance the economy in favour of the young.

Now look at Ireland. We don’t have the same raw data as the Americans, but we know that housing wealth constitutes over 80 per cent of wealth in Ireland. Older citizens have seen a massive uplift in property prices since the 1970/80s. This property windfall is the biggest source of wealth in the country.

Housing wealth is heavily concentrated in the older generation, and younger people are increasingly locked out of the housing market. Irish trends are broadly similar to the USA – granted, without quite such huge disparities. Five years ago, I ran the numbers for a documentary called Ireland’s Great Wealth Divide; they’re unlikely to have changed much.

Now look at the new programme for government. Remember the election was a straightforward demographic plebiscite. In practical terms, Sinn Féin won the youth vote; FG/FF won the older vote.

Yet there appears to be precious little in the programme about the exploding demographic divide. Where there are specifics, they’ve come from the Green Party’s insistence on concrete metrics and targets. We have seen a reaffirmation of the two “old” parties’ broad commitments made in February and one of the main sticking points was apparently the kicking of the can down the road with regards the State pension age here.

On the surface, does this not look like rewarding an older generation that has already seen unprecedented wealth accumulation and asking the under-35s to bankroll it in the future?

Over a decade ago, I wrote a book called The Generation Game arguing that if trends elsewhere were repeated, Ireland would experience a generational divide, politically and economically. That day has come.

For my generation the biggest gap between us and our parents was social. We differed profoundly over lifestyle, liberalism and tolerance. Today we listen to our kids’ playlists!

But now the gap is economic and financial. Unless this prospective new government focuses on narrowing this divide, with dramatic and radical policies on housing, wresting land and wealth ownership from the older generations, the future will belong to a different political force.