To learn how Russia got to this point, follow the money 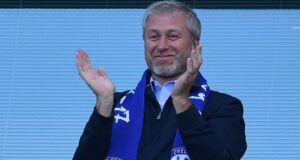 The story of Champions League title holders Chelsea Football Club is essentially the financial story of modern Russia, one characterised by asset-stripping, enormous wealth being squirrelled offshore, money-laundering and sportswashing on a monumental scale.

This worldwide racket was facilitated by many so-called “reputable” legal, financial and accounting firms, names you will know well. If you want to understand motives, strategies and moves in the former Soviet Union, you need to follow the money.

There have been four separate episodes of wealth creation and extortion in Russia over the past three decades. It’s worth examining how the biggest heist in modern financial history was orchestrated; if the latest proposals from the Ukrainian central bank governor are taken into account, there might be a positive outcome to the years of serial looting. We will come back to Chelsea, the Premier League club, but first let’s start at the beginning or at least the beginning of the end of the Soviet Union.

I first visited the USSR in January of 1987 as a student. In that deep winter, Moscow was still firmly under the grip of communism, and presented an extraordinarily alien vista, not just the difficulty of the language and the alphabet, but the oppressiveness of the regime which was palpable everywhere.

Yet the Russians were warm, funny, highly educated, hospitable, enormously curious, as perplexed by me as I was by them. Bizarrely, of all the otherworldly aspects of the country, the one that struck me most vividly was that the radiators were always on.

(I know – of all the things, from gulags to censorship, only a student economist could get worked up by radiators.) It was minus-30 degrees outside but I slept with the windows open. The radiators were at full blast day and night. Coming from an Irish household where, in the 1980s, the most grievous sin imaginable was to leave the immersion on, such reckless abandon seemed criminal.

But in the Soviet Union energy was free. In Ireland, a country that imported most of its fuel, energy was expensive. Here’s where our story begins.

Tsarist Russia found oil and gas reserves in gargantuan quantities in the early 20th century. These deposits were mined by Stakhanovite Soviet workers in subsequent decades. By the 1970s, the financial stability of the Soviet Union was tied up with the price of oil on the global markets.

The USSR sold the oil for dollars but paid for its cost base – wages, raw materials and transport – in internationally worthless roubles. Anyone who traded dollars on the Russian black market back then will understand the difference between the official and real exchange rates. Financially, the oil-for-dollars game was the trade of the century. By charging full prices to the West, subsidised by a fictitious exchange rate internally, the country could heat itself for nothing, and simultaneously fill the coffers of the central committee with dollars.

As the USSR wasn’t importing consumer goods, this slush fund allowed Moscow of the 1970s to pursue its global agenda, from invading Afghanistan to directly funding Marxists all over the world, including the Irish Workers’ Party.

The Soviet state built enormous wealth selling oil for dollars and paying its workers in roubles. But it also provided free healthcare, free housing, transport, childcare, education, workers’ holidays and a whole host of other enviable basic services, unattainable to many in the West. When oil prices were high, the state functioned. When oil prices collapsed, the state became fragile.

In a sense, the country functioned like an oil-rich emirate with polyester and Marx rather than Ferraris and Mohammed. Having peaked at $35 a barrel ($120 in today’s money), it should not surprise you to hear that from 1985 to 1990, the years of the collapse of the Soviet Union, oil prices slumped to $10 a barrel and never went above $17. The so-called “oil glut” of the 1980s destroyed communism more effectively than any guff about ideology. Without oil money, the Soviet Union went bankrupt.

The first iteration of wealth creation was the Soviet Union building its oil and gas infrastructure and largely using this wealth to subsidise the state and public services. Once the country collapsed, the energy industry was privatised in the mid-1990s under Boris Yeltsin, under a voucher privatisation scheme. Every citizen was given a token to say they owned a tiny fraction of the business.

Now for the second iteration of the asset transfer. Some clever men understood if they could amass these tokens they could own the industry, so they bought the tokens for pittances from confused citizens and, at a stroke, acquired the sector. As they had been involved in the sector, they were selling commodities in dollars, converting these into roubles, buying the tokens in roubles and thereby acquiring the assets.

The oligarchs, such as Roman Abramovich, were off. They now owned the second-largest oil industry in the world. It is estimated that 22 individuals, friendly to Yeltsin, stole 40 per cent of the country in exchange for using their resources to get Yeltsin re-elected in 1996.

The third phase of the great Russian wealth heist involved getting all this mineral wealth out of the country, where the Russian people couldn’t get their hands on it. They bought everything that the West had to sell: yachts, property, companies, vineyards, art and, of course, football teams. And they made sure to keep the new president (and Yeltsin’s chosen successor) sweet, as Putin had the power to confiscate the source of their wealth at home. The looting was – and is – phenomenal.

According to a 2020 report from the Atlantic Council on Russian dark money, Vladimir Putin and his closest associates control around one-quarter of the estimated $1 trillion worth of assets stashed away in the West and beyond Russia’s borders.

According to a 2017 paper from the US National Bureau of Economic Research, an estimated 60 per cent of Russian wealth exists offshore. Estimates from Columbia University in 2014 suggested that about $1.3 trillion in Russian assets were offshore.

More estimates from 2019 point towards some $920 billion of net private Russian wealth located offshore. According to Transparency International, Russian oligarchs hold a combined $2 billion stake in the London property market, with an estimated 500 Russian multimillionaires living in the UK alone – many contributing to the Conservative Party.

Russian oligarchs and their companies are estimated to hold around $11 billion in Swiss bank accounts, accounting for about one-third of Russian banking assets globally.

In this effort to transfer the mineral wealth of the country, Russian oligarchs deployed the services of the world’s most respected lawyers, accountants and of course bankers.

They were the facilitators, for which they were very well paid. Which brings us to Chelsea FC, maybe the most conspicuous of all the trophies. Abramovich, “close” to both Yeltsin and Putin (read into that what you will), sportswashed his money, gaining the adulation of west London football fans in the process. This week, the UK finally sanctioned the tycoon, meaning – amongst other things – he can’t make any more money on the sale of Chelsea.

But here is the latest twist in the story. Ukraine’s central bank governor suggested that the billions of dollars in frozen assets seized from oligarchs close to Putin could be put into a fund and used to pay reparations to Ukraine and to stabilise a post-Putin Russia.

If this came to pass as part of a Marshall aid plan to rebuild the region, there would be a certain moral symmetry in the story. Wealth created by the communist USSR, then extorted from the citizens of Russia, which lined the pockets of power in Moscow and then was transferred to the West by a tiny oligarchy, might find its way back to the region to rebuild a destroyed country.

Or maybe that’s only in Hollywood.