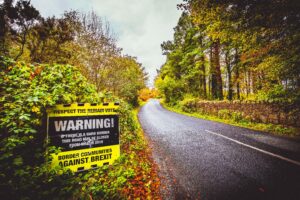 Northern Ireland is the only part of the UK economy, apart from London, to have a higher level of income today than before the pandemic. Interestingly, the two parts of the UK that voted decisively against Brexit are doing well in the first two years of that project’s existence. Tellingly, the areas that voted for Brexit, hoping for some economic resurgence, have seen their incomes slump. London has grown because it is the epicentre of the UK’s pre-eminent Fire. (finance, insurance and real estate) economy.

The main reason Northern Ireland is doing well is that it is on a different island, powered by a far more energetic economy: the Irish economy. We are dragging the North up relative to the low-growth, low-productivity, low-income UK. In the period between January and April 2022, exports to Northern Ireland from the Republic went up by 40 per cent compared with the same period in 2021, according to the Central Statistics Office’s latest figures. Obviously, the key difference between Northern Ireland and the rest of the UK regions is the protocol, the opt-out that allows the North to have an economic foot in both camps.

Looking forward, the protocol gives the North an opportunity to grow up economically and create a region with unencumbered access to the main markets: the island of Britain, the continent of Europe and, of course, the investor base that is the USA. An open, free-trading zone with an educated and cheapish labour force, a functioning legal and taxation system, fairly priced real estate and decent infrastructure, Northern Ireland is an ideal economic location. Furthermore, it is attached to what has been the fastest-growing country in Europe for almost three decades now, with an economic model that could be relocated to the northeast of the island.

The protocol’s prize is prosperity and this is why it is hard to understand the collective unionist opposition to it — at least from a modern state perspective. Quite apart from a sectarian headcount (which is going against them), a core offering of unionism should be that Northern Ireland works better economically than the alternative — a united Ireland. In contrast to nationalism, unionism has to make the union work, otherwise what’s the selling point for the middle ground? It is not hard to comprehend nationalism trying to torpedo the Northern Irish economy, but for unionism to do this, is bizarre. In order to make Northern Ireland an attractive place commercially, the political status quo must give itself a fighting chance of working in a globalised 21st-century world. The protocol does that.

Unfortunately, the collective economic nihilism of unionism since the foundation of Northern Ireland is a repetitive strain in unionist thinking. And the extraordinary thing is when the Northern state was set up, unionism held all the commercial cards. A quick look at the economic history of the island bears this out.

Take, for example, emigration which has always been a good indicator of economic frailty. Between 1841 and 1951, the population of what would become the Republic’s 26 counties fell by 55 per cent compared to just 17 per cent in the six counties of Northern Ireland, underscoring how advanced the northeast’s economy used to be. If we go back to 1907, two-thirds of the industrial output of the entire island of Ireland came from the six counties that would go on to become Northern Ireland, with activity largely centred on Belfast. This was where all Irish industry was located. Ulster was industrial and innovative; northern entrepreneurs and inventors were at the forefront of industrial innovation. By 1911, Belfast was the biggest city in Ireland with a population of 386,947 — comfortably outstripping that of Dublin at 304,802. Belfast was also growing rapidly. The northeast was by far the richest part of the island.

According to the 1911 all-island census, Protestants in Ireland accounted for 26 per cent of the total population, yet occupational returns suggest that they made up an outsized 40 per cent of the industrial workforce. In 1926, manufacturing accounted for just 7 per cent of employment in the Republic compared with 29 per cent in Northern Ireland. For most other small European countries at the time, manufacturing employment stood at about 25 per cent, reinforcing just how backward and poor the Republic would have seemed to northerners.

As a result of this, a myth evolved that the North was always — at least until very recently — economically more advanced than the South. Equally, it has regularly been argued that staying with the UK is the right thing to do for their back pocket, possibly because of the UK’s ongoing subvention to the Northern economy. However, ongoing subventions hinder an economy from standing on its own two feet and thus, over time, it will become completely dependent on handouts, as Northern Ireland is today. If it were asked to pay for itself today, with a budget deficit of 27 per cent of GDP, Northern Ireland wouldn’t last a day.

From a great start 100 years ago, unionism has blown it. The truth is the union has been an economic calamity for Northern Ireland. All the people have suffered, Catholic and Protestant, unionist and nationalist. Today, the formerly backward South (despite our many failings) operates in a completely different economic sphere to the North. The Republic’s economy is today roughly six times larger than the North’s, generated by a workforce that is only 2½ times bigger. The median income per head in the Republic is €43,915 versus €33,550 across the Border — that’s 30 per cent higher and the gap is widening.

The future of Northern Ireland is a bit like a custody battle where neither side — Ireland nor Britain — is particularly sure that they want the child, but both know that the child can’t survive, financially or emotionally, on its own. The protocol at least gives Northern Ireland a chance to reinvent its economic vision, away from handouts towards something like a normal 21st-century economy. At the moment, unionism appears like a coalition of the “left-behinds”, nostalgic for some Edwardian era, fetishising long-defunct industries, snarling at the modern world, seeing problems rather than opportunities and all the while, its more ambitious children emigrate.

The responsibility for making Northern Ireland work rests with those who want it to work; mainly, but not exclusively, this is the unionist community and their politicians. The protocol offers a blueprint to turn the region into a free-trading entrepôt. We’ve noted here before that the DUP is the party that never misses an opportunity to miss an opportunity. Surely they can see that themselves?