Want to check an economy’s health? Forget the IMF and count Irish pubs

Look at the chart for the latest from January 2014 and notice which cities scream crisis.They are Kiev and Istanbul. 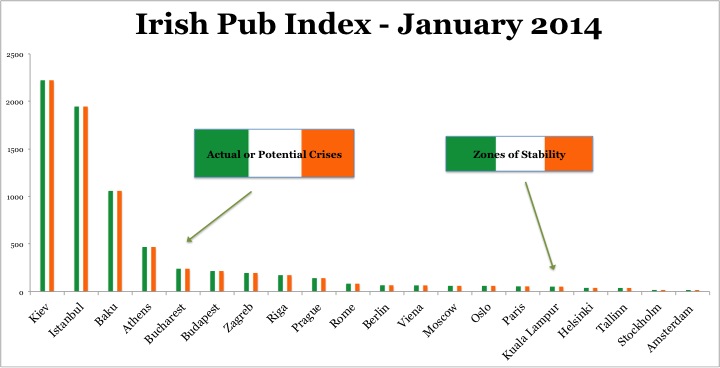 Now that President Putin has made a fool of the West and proved a point, which is that Russia is the top dog in the region, let me share with you a story about Kiev and how it spawned the Irish Pub Index of financial crises.

Years ago, I found myself in Kiev’s Irish pub, Kitty O’Shea’s, facing a bit of a dilemma. I was working for a French bank and was charged with explaining what was going on in Russia and Ukraine.

Having met the IMF, World Bank andEU delegations, along with consultants and other bottom-feeders, it struck me that these rarefied bureaucrats hadn’t a rashers what was going on in the place. They were typical economists: removed, distant and naive. You wouldn’t give them a post office account to open back home.

One of the barmen in Kitty’s was a different kettle of fish – a typical Irishman with a roguish sense of humour. We got talking about Irish pubs in Eastern and Central Europe. He knew the market, the demographics, who had money in Kiev and the ratio of expats to locals. He explained how to get import licences and how to weed out crooked ‘drifter’ Irish barmen.

He knew how to defer tax payments, how to spot a good site and a decent landlord. He knew where to source furniture locally, how to deal with local tradesmen, who to pay first, and how to ‘incentivise’ officials.

He outlined his marketing strategy and which local movers and shakers to target as regulars. He advised about avoiding the mafia. He emphasised the importance of the brand and the significance of local aspirations. This barman was a mine of information.

He offered advice on pricing strategies. He had figured out how to borrow in pounds, hedge his local currency risk and stay on good terms with the bank – quite an achievement. That evening, he outlined the basics of running a cash business in a foreign country.

After a few pints, it struck me that the opening of an Irish pub in a developing city could tell you more about what was going on in the economy than a glossy economic report. The opening of an Irish pub tells you who is investing where, why and at what price more accurately than statistics about inflation, budget deficits or trade deficits. With that in mind, the Irish Pub Index was born.

The theory is that wherever you see an Irish pub it reveals economic vibrancy, particularly in developing economies where official statistics tell you nothing. So the more Irish pubs per head of population, the easier it must be to do business. The easier it is to do business, the richer the city is likely to be. Therefore, if you want to get a snapshot of how a place is doing economically, forget the IMF, the World Bank, the large consultancies, and check out the bars.

Ultimately, the more Irish bars a place has, the richer it should be and the smaller the risk of a financial or political crisis. That at least was the tipsy ‘theory’ I formed in Kitty O’Shea’s.

Next morning, Guinness in Dublin provided me with the information on Irish bars around Europe, and the Irish Pub Index of Economic Development began to emerge. Amazingly, in practice, it was even more accurate than in theory. The foreign cities with the most Irish bars per head were indeed the richest in Europe.

The Pub Index reveals fascinating on-the-ground insights into who is spending, what brands are rocking, where investment is being made and what parts of the town are up-and-coming. In short, it tells us in advance what economic statistics will only pick up in hindsight. Over the past few years, the Irish Pub Index has proved to be a much more accurate indicator of GDP five quarters ahead of time, than any complicated IMF, World Bank or Central Bank econometric model.

I update it every quarter. Look at the chart for the latest from January 2014 and notice which cities are screaming crisis according to the Irish Pub Index. They are Kiev followed by Istanbul, the two emerging market cities that have seen financial, civil and economic upheaval in the past few weeks!

As Flann O’Brien might say, in economics as well as life, “the pint of plain is your only man”.

On the subject of Irish pubs you can now pay for your pint with Bitcoin in the Baggot Inn, Dublin.

First Irish pub to accept the cryptocurrency, but by no means the last.

And no Tony, they don’t take gold.

Interesting article David.
Does it apply for all other businesses like certain boutiques, high flyers, coffee places, etc? Or is this a unique Irish Pub measuring system?

Istanbul is a predominantly Muslim community and so they shy away from alcohol let alone Irish bars. Correct me if I am wrong.

My favourite article. Ever.

Ireland is full of Irish pubs, ergo it should be the richest country in the world, rocket proof from silly little things like recessions.

Loving the Irish pub theory, sadly it doesn’t stand up in the city that is the home of the Irish pub, Dublin!

Where does Minsk fit into this equation ? Why is it not mentioned when it is so near Kiev ?

Well, Brisbane must be bollixed then as I have yet to find a decent Irish Pub.

David is superb at connecting economics to peoples day to day lives but is unfortunately clueless on the “geopolitical” context. To give some context can I draw your attention to two quotes from NSNBC “The evidence for Western-sponsored subversion in Ukraine is so glaring – from the parade of American and European politicians over the past four months whipping up protesters in Kiev, to documented infiltration of civic organizations by the CIA, USAID, National Endowment for Democracy, Freedom House, the Adenauer Foundation, among others, to their own words of admission from the likes of State Department official Victoria Nuland on… Read more »

+1 kplcards. Putin may be power hungry, but he sure loves his country and tries to do his best for it. The Western media propaganda would put Her Goebbels to shame.

An alternative view of Putin;
http://www.newswithviews.com/Gonzalez/servando111.htm

Let The Crimea go it’s own way – if most of the people want to become part of Russia then that’s their own business.

Self-determination for everyone is what I say.

Couldn’t contrast more with last weeks nonsense. Bluffit uses the number of railroad cars in operation as his guage. Others use the Purchasing manager’s index which is predictive.

The pub index has real merit and is produced from on the ground data like the feedback from the guy you met on the bus a few weeks ago and unlike the rtepravda/spindo nonsense.

The chart is at first glance confusing. It seems to indicate that Kiev has the most Irish pubs.

Agree that economists have become the silly priests and theologians of the capitalist religion and the neo-liberal worship of the Omniscient and Omnipotent Invisible Hand. In future centuries they could well be viewed as purveyors of superstitious nonsense, and very very harmful nonsense indeed. If we survive global warming, of course.

It seems to me that this article reflects one of the problems that many people have, that of the lack of belief in much of the official statistics. The stock markets are surging through all-time highs, now in the longest bull run in history (or one of the top 3, can never find out). If we are to believe the rules and laws of the economists, we are living in the economic best of times, very tight employment, surging wages, and wealth all around us. The stock markets are “forward looking”, six months of a year. A year ago they… Read more »

“Bono is a complete Knucklehead , twat & quite possibly …a gobshite”

his ridiculous statement at the eep conference

unfortunately a music hero of mine gas become a shadow of what he once stood for.

balance is the holy grail…

hope you had a pleasant Sunday

The Irish Pub Index – An indicator for security and peace? | Food for thoughts

[…] Did you ever think, that the number of inhabitants per Irish bar correlates with security and peace? It is interestuing, that those countries in actual or potential crisis have a higher per inhabitant ratio to Irish bars than those countries deemed to be zones of stability. Read the whole article here. […]

[…] Pub Index and how you can use it as an emerging market leading indicator (see original article here). I finished the day back in Dublin on Prime Time on RTE, analysing whether Irish property will […]