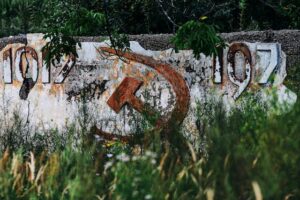 It’s difficult to convey the energy and excitement that pulsated through Prague in the blisteringly hot final days of August 1989. The city had become a magnet for East Germans transiting in their Trabants through the then Czechoslovakia heading for the where the reforming Hungarian communists had opened the Hungarian/Austrian border. Rattling in on the old East German railway, Deustche Reichbahn, from Ostbanhof in East Berlin, I arrived in the Czech capital on the 21st anniversary of the Prague Spring.

The Czechoslovak regime, hard-line to the last, deployed truncheons and Alsatians to viciously disperse a group of only a few dozen demonstrators in Wenceslas Square. Four months later there would be one million on the same streets, demanding change.

That night, thanks to Thin Lizzy, I ended up with a Dresden-based biker gang whose most prized Western contraband was smuggled copies of Jailbreak. Toasting Phil Lynott, on possibly the coolest motorbike ever manufactured, the Kyiv-made Dnepr M-72, these Soviet-bloc Hells Angels reserved Philo-style admiration for only one other man: Mikael Gorbachev. In the summer of 1989, Gorbachev stood for freedom, hope, peace and — yes — love.

He embodied the dreams of millions of repressed citizens of the communist bloc. An extraordinary visionary, Gorbachev’s politics were instinctively antithetical to Lenin’s. Amazingly for someone who got to the top of the Communist Party, every sinew believed in the freedom of the individual and the right to private, personal mutinies against dogma. 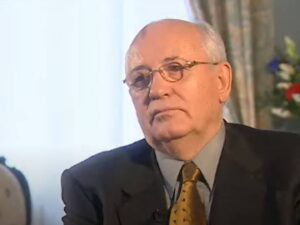 In the end it was his refusal to use violence against demonstrators (excepting Lithuania), that marked him out as a true statesman.

At a time when “democratic” British, American and French forces were shooting and battering protesters at home, an “autocratic” Soviet Union, under Gorbachev, left eastern Europe without firing a single shot. Given what we know now about the violent potential of the Russian army, this restraint could only have been exercised by unimpeachable moral authority from the top.

Gorbachev had a deep moral conviction that violence was not the way to achieve your objectives. For a Russian leader, such instincts were unprecedented.

Following those extraordinary days of autumn 1989, our world changed forever. Owing to Gorbachev’s private convictions, millions of people were bequeathed the freedom to say what they wanted, live where they wanted, vote for who they wanted. Without him, these changes wouldn’t have happened, at least not then. Unlike what followed, Gorbachev was neither violent nor corrupt. He never enriched himself or his family with any of spoils of the Soviet Union. Maybe the bit of Leninism that remained was an attachment to the core socialist principal of equality.

A couple of years later, in August 1991 when living in Novi Ruza, a small place on the road between Smolensk and Moscow, I witnessed the whole Soviet world collapsing from the inside. News of the August coup against Gorbachev slowly filtered down to us. By then, people in the village were split. My Russian teachers, well-educated and cosmopolitan, stood squarely behind Gorbachev and his foreign minister Edward Shevardnadze, but the lads in the local bar had had enough of the chaos. Many evenings, I sat and listened as ordinary Russians argued about whether it was all worth it.

By that stage, accessing food was a real issue. The collapse of the Soviet Union, so often described in academic, geopolitical terms, announced itself in hunger as food supplies started to run out. Initially, it was longer queues for meat, sausages and butter, but quite suddenly in the autumn of 1991, the village ran out of food. At best, food supplies were erratic. The great centrally planned Soviet economy was beginning to break down and at the end of these shattered supply lines were ordinary people.

During the next few months, only a few boxes of 20-packs of Marlboro helped alleviate my hunger pangs as the villagers scrambled for basics. No system or politician can survive such chaos. On Christmas Day 1991, Mikael Gorbachev resigned and dissolved the Soviet Union — a country that had come into being, like our State, in 1922.

It didn’t even make it to 70 and yet its legacy — ideologically, militarily, and politically — is still being fought over in Kherson, Donbas and Kyiv, home of those Dnipr M-72 bikes, worshipped by those freedom-loving East German bikers, Gorbachev’s children.

In 2002, Gorbachev came to Ireland and I had the chance to sit down with him, interviewing him for a current affairs TV show I presented back then on TV3. We chatted about Novi Ruza, the winter of 1991, the earlier summer of 1989 and my first visit to Russia in 1987, two years after he took power and signalled to the world that the old world must change.

His soul mate, Raisa, had died two years earlier and he spoke about the void. Charming, warm and smiling, yet serious, this was a man who had truly changed the world. Could things have been different? Yes. Were mistakes made? Of course. Had he regrets? No doubt. But in the end, he tried. For millions, dislocated by the end of communism, he tried and failed. For millions of others, liberated from the crudity of the Soviet world, he tried and succeeded.

Fascinatingly, one country that benefited profoundly from the new world that Gorbachev created was Ireland. At the time, few predicted that one of the main beneficiaries of the era of globalisation that followed the collapse of the Soviet Union would be this country. The mainstream narrative predicted a surge in direct foreign investment into central and eastern Europe. 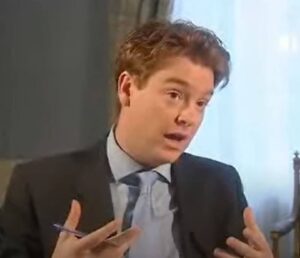 Countries like Hungary, Czechoslovakia, and Poland, not to mention those further east, were tipped to grow rapidly. As it turned out, American corporations did invest heavily in the new Europe, but they chose Ireland as their bridgehead, preferring our tax regime, the language and cultural similarities, over what lay beyond the Elbe.

The EU single market, itself a response to the fall of the Berlin Wall, gave Ireland access to a huge European market which the Americans were keen to exploit rather than live in. In addition, hundreds of thousands of talented eastern Europeans, locked behind the Iron Curtain before Gorbachev, flocked west, adding their brains and muscle to the Irish economic effort.

Money and talent flooded into Ireland as an indirect result of the decisions taken by the last leader of the Soviet Union, perhaps changing this country more profoundly than many of our home-grown political leaders.

When I met him, I was struck by the kindness in those brown eyes, a kindness that prevented him from using the military to crush protest, a kindness that is lamentably absent in today’s Russian leadership.