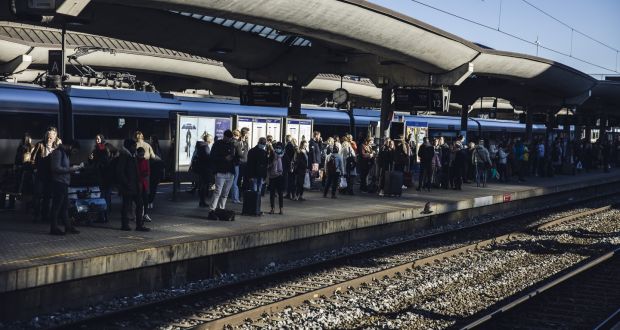 Fossil fuels are the slave trade of the 21st century, and these companies defiling the planet will be ostracised over the next 30 years.

We will make this change, without doubt. Supporting the burning of fossil fuels will soon become a mark of shame and derision. Those companies and financiers who continue to contribute to global warming will be seen as pariahs.

They may still get finance, but it will be from rogue financiers who don’t want their money to be traced. Who knows, maybe this is one of the things Bitcoin will end up being used for.

This week, the world’s big banks, pension funds and asset managers pledged $130 trillion to finance renewable energy development, seven times the GDP of the US. There will be no shortage of money when it comes to saving the planet. That’s the carrot. The bankers stopped short of brandishing the stick of punishing the fossil-fuel abusers, but that will come.

More than anything else, we are talking about a generational shift. When generational morals shift, that’s it. The young always win. Think about any of the big ideological or cultural battles of your lifetime: the old hang on, maybe for more years than initially thought, but then the ground moves. Progress happens slowly, one funeral at a time.

As this column has argued before, it’s all upside for Ireland, blessed as we are with abundant wind and wave energy. In a world where there are only four forms of renewable energy – solar, geo-thermal, wind and wave – Ireland is abundant in the latter two.

The fuel-burning combustion engine is over, and electricity powered by renewables is the future. It will take time, and there will be blended forms. Years ago, arguing for nuclear power, I was accused of being radical or even dangerous, but nuclear is an obvious part of the solution.

But what about practical steps now? It’s all very well to talk about greenhouse emission reduction, but how do we do it? The Government’s Climate Action plan unveiled on Thursday has lots of rhetoric but is still short on detail of how its ambitions could be achieved. An initiative by the city of Oslo is well worth considering in Ireland. The idea is climate budgets – different from our Government’s carbon budgets.

Oslo is a key member of the coalition called C40, a union of cities committed to climate change and sustainable urban living, which includes the 15-minute city concept, denser metropolitan living and the elimination of the combustion engine.

As its website says: “C40 is a network of mayors of nearly 100 world-leading cities collaborating to deliver the urgent action needed right now to confront the climate crisis. Together, we can create a future where everyone, everywhere can thrive.”

No Irish city or mayor is a member of this group of 100.

The idea of a climate budget is quite straightforward, linking the traditional annual budget to climate-change targets as well as financial targets. Every department of the city, as usual, gets a certain budget – but it is tied to a climate-change target. It links the chief financial officer to environmental objectives. By connecting the climate to the money, climate policy and financial budgeting become one and the same thing, so that only spending plans consistent with the goals of climate strategy can be approved.

The climate budget outlines targets for cutting emissions in, for example, the transport sector (often one of the biggest greenhouse-gas offenders) by demanding that the public bus company hit certain milestones. The chief financial officer of the bus company, therefore, has the responsibility of delivering, say electric vehicles, and their budget is determined by climatic as well as financial concerns.

Crucially, the finance department is responsible for implementing environmental policy. No longer are the hard money men of finance hamstrung by the soft, wishy-washy concerns of the tree-huggers, as is regularly the case in companies, public and private. Today in Oslo they are one.

The climate budget obviously means the buck stops somewhere every year, but it also breaks the often-cited link between money and the planet. For too long, the weapon of climate-change abusers has been economic or financial. Traditionally, the finance guys would roll their eyes at the environmentalists, with the suffocating retort: “Where are we going to get the money for this or that?”

The Norwegians have cleverly put the accountants and the activists on the same side, in the same office, unified by the same targets.

Besides transport, a major polluter in any city is the construction sector. Here Oslo has linked planning permissions to climate change. Gradually, all sites will be fossil-free building sites. Zero-emissions construction sites are the target. The city understands that this is going to be tricky, but it has set goals of between 40-80 per cent of building activity by 2024.

Already, the first zero-carbon site is operating in the city. Electric diggers and cranes will become the norm. In 2015, there was no such thing as an electric digger. Today, four major truck manufacturers are producing them.

While Oslo has pioneered the practice of climate budgets, according to C40, other cities are getting in on the act, including Barcelona, Berlin, Los Angeles, Milan, Montreal, Mumbai, Stockholm, Paris and Rio de Janeiro.

Meanwhile, Ireland still seems to be focused on carbon budgets, with no real executive force driving us towards the commitments established in the Climate Action Bill, namely a 51 per cent drop in carbon emissions by 2030 and net-zero emissions by 2050.

The truly lamentable aspect of this story is that Norway, a major producer of oil and gas, has every selfish national reason not to accelerate the change from fossil fuels to renewables. In contrast, Ireland is a hugely dependent importer of fossil-fuel energy, and one of the countries that has most to gain from switching to renewables. Yet we are only at the beginning of this transition.

Norway, with lots to lose, has a climate budget blueprint. Ireland, with so much to gain, still has no such detailed plan. Now is the time for action. Every day counts.