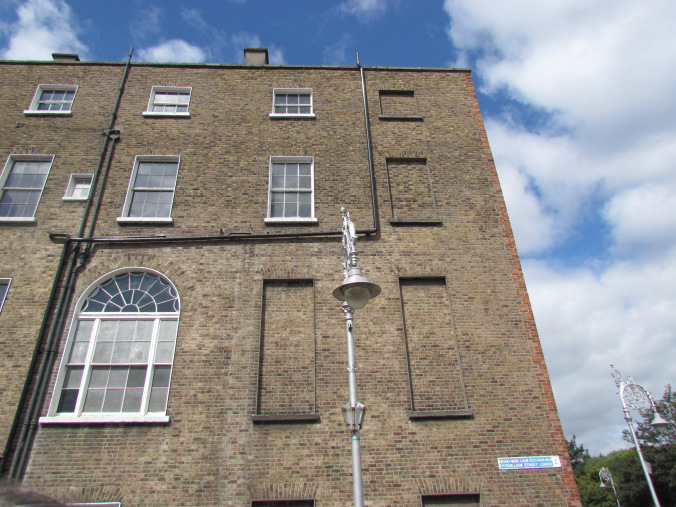 Have you ever wondered why the windows of the Bank of Ireland on College Green in Dublin are bricked up? It is because of the imposition of a wealth tax, called the “window tax”.

Ireland, the UK, Holland, parts of northern France – unlike the Mediterranean – are starved of natural light at certain times of year. In the pre-electricity era, light was a luxury in these countries.

The urban poor lived in a dark world of gloomy, window-less hovels, while the rich who wanted to live in the brightest rooms possible, built magnificent ceiling to floor windows to let in the light . Georgian sash windows attest to class difference; the poor lived in the shadows and the rich lived luminously.

In early 18th-century Ireland, just after the Act of Union, the new London government needed cash to finance the Napoleonic Wars and extended the window tax, long established in England, to Ireland. The College Green building was built as the parliament of Ireland but the 1801 Act of Union put paid to that, and the majestic building was sold to the Bank of Ireland. The bank avoided the wealth tax by blocking up the windows.

Tax avoidance brings out both the creative and the bluntest human responses. The Georgian approach of bricking windows was heavy-handed, but it worked. I’ve yet to meet the citizen who pays more tax than they must. When you get new taxes, you also get new tax avoidance schemes. However, that does not mean wealth should not be taxed – at least as much as income.

Wealth taxes are back. They are now a significant feature of the US presidential election, with both Elizabeth Warren and Bernie Sanders wedded to taxing wealth, particularly of the very rich.

Wealth inequality in the West is the defining issue of our day. US inequality is in a league of its own compared with Europe but wealth inequality remains stubbornly high throughout western Europe and, as asset prices have risen in the recovery, it’s getting worse.

One simple way to differentiate the wealthy from the rest of the population is to understand that the wealthy are those whose income comes from assets, such as rent and dividends, while the rest of society depends on wages for their income.

Wealth makes money for you even when you are asleep. Property ownership, land, stocks and shares in companies generate income for owners. And even if some forms of wealth do not always provide current income – such as a large valuable home – wealth always confers privilege, status and opportunity that is not available to those without it.

Even if it is not liquid, wealth confers value and is at the core of the distinction between the haves and have-nots, which is precisely why the accumulation of wealth is so desirable and a source of great human drive, ingenuity and commercial brilliance.

But if the gap between the very top and the average becomes too wide, problems arise and the gap should be redressed in the name of societal fairness. This is particularly the case if the growth in wealth far outstrips the growth in incomes, undermining the social contract and the political status quo.

Psychologically, absolute wealth is rarely the problem; the problem is relative wealth. It is the contrast between what you have and what the guy down the road has, that grates and leads not just to social anxiety but personal anxiety and the sense that you are falling backwards.

Economically, great disparities of wealth are inefficient because rich people don’t spend money, they hoard it, which is why we have so many “wealth managers”.

One of the great myths of economics is that rich people create jobs. They don’t. Demand creates jobs. If a billion (one thousand million) euro is held by one person, the chances are that 99 per cent of that money will leave circulation.

Few jobs are created by the spending of one billionaire, even a free-spending one. However, if that same billion were distributed between one million people having €1,000 each, the impact on the economy would be immense.

Poorer people have a much lower propensity to save, and so the billion euros would recirculate and recirculate, generating enormous economic dynamism and countless jobs.

Armed with these observations, let’s look at Ireland.

News this week that Ireland has the fifth largest number of “ultra-wealthy” individuals per capita in the world, got me thinking again about wealth inequality in Ireland.

A few years ago, I was involved in an RTÉ documentary called the Great Wealth Divide. We focused on two sets of data, one compiled by the European Central Bank called the Household Finance and Consumption Survey (HFCS) and data compiled by Credit Suisse, an investment bank.

(The difference might be explained by the fact that when asked in a survey, rich people brag to an investment bank but understate their wealth when asked by the State. Either way, the figures – underpinned by raw financial data on property, stocks and deposits – reveal profound unfairness.)

Given that a huge chunk of wealth is tied up in property and land and can’t – by definition – leave the country, it is clear that this is low hanging fruit.

As the world becomes less tolerant of wealth inequality (and I do believe we are moving into such an era, led by the USA), the incentive to tax the super wealthy will become more difficult to resist.

Both the popular left and right will agitate for such a move so much that the centre might eventually adopt it. This is precisely what happened in the US from the 1930s to the 1980s. Is it time for the pendulum to swing again?